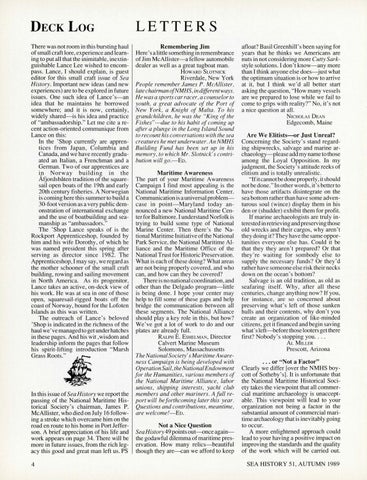 There was not room in this bursting haul of small craft lore, experience and learning to put all that the inimitable, inextinguishable Lance Lee wished to encompass. Lance, I should explain, is guest editor for this small craft issue of Sea History. Important new ideas (and new experiences) are to be explored in future issues. One such idea of Lance &#39;s-an idea that he maintains he borrowed somewhere; and it is now, certainly, widely shared-is his idea and practice of &quot;ambassadorship.&quot; Let me cite a recent action-oriented communique from Lance on this: In the &#39;Shop currently are apprentices from Japan, Columbia and Canada, and we have recently graduated an Italian, a Frenchman and a German. Two of our apprentices are in Norway building in the Afjordsbaten tradition of the squaresai l open boats of the 19th and early 20th century fisheries. A Norwegian is coming here this summer to build a 30-foot version as a very public demonstration of international exchange and the use of boatbuilding and seamanship as &quot;ambassadors.&quot; The &#39;Shop Lance speaks of is the Rockport Apprenticeshop, founded by him and his wife Dorothy, of which he was named president this spring after serving as director since 1982. The Apprenticeshop, I may say, we regard as the mother schooner of the small craft building, rowing and sailing movement in North America. As its progenitor, Lance takes an active, on-deck view of his work. He was at sea in one of those open, squaresail-rigged boats off the coast of Norway, bound for the Lofoten Islands as this was written. The outreach of Lance&#39;s beloved &#39;Shop is indicated in the richness of the haul we&#39;ve managed to get under hatches in these pages. And hi s wit ,wisdom and leadership inform the pages that follow his spirit-lifting introduction &quot;Marsh

Remembering Jim Here&#39;s a little something in remembrance of Jim McAllister-a fellow automobile dealer as well as a great tugboat man. HOWARD SLOTNICK Riverdale, New York People remember James P. McAllister, late chairmanofNMHS, indifferent ways. He was a sports car racer, a counselor to youth, a great advocate of the Port of New York, a Knight of Malta . To his grandchildren, he was the &quot;King of the Fishes&quot; -due to his habit of coming up after a plunge in the Long Island Sound to recount his conversations with the sea creatures he met underwater. An N MHS Building Fund has been set up in his memory, to which Mr . Slotnick&#39; s contribution will go.-Eo.

In this issue of Sea History we report the passing of the National Maritime Historical Society &#39;s chairman, James P. McAllister, who died on July 16 following a stroke which overcame him on the road en route to his home in Port Jefferson. A brief appreciation of his life and work appears on page 34. There will be more in future issues, from the rich legacy this good and great man left us. PS 4

Not a Nice Question Sea History 49 points out--once againthe godawful dilemma of maritime preservation. How many relics-beautiful though they are-can we afford to keep

afloat? Basil Greenhill&#39;s been saying for years that he thinks we Americans are nuts in not considering more Cutty Sarkstyle solutions. I don&#39;t know-any more than I think anyone else does-just what the optimum situation is or how to arrive at it, but I think we&#39;d all better start asking the question , &quot;How many vessels are we prepared to lose while we fail to come to grips with reality?&quot; No, it &#39;s not a nice question at all. NICHOLAS DEAN Edgecomb, Maine

Are We Elitists-or Just Unreal? Concerning the Society&#39;s stand regarding shipwrecks, salvage and marine archaeology-please add my name to those among the Loyal Opposition. In my judgment, the Society&#39;s attitude reeks of elitism and is totally unrealistic. &quot;Ifitcannotbedone properly, it should not be done.&quot; In other words, it&#39;s better to have those artifacts disintegrate on the sea bottom rather than have some adventurous soul (wince) display them in his den or (shudder) exhibit them for profit. If marine archaeologists are truly interested in retrieving and preserving those old wrecks and their cargos, why aren&#39;t they doing it? They have the same opportunities everyone else has. Could it be that they they aren&#39;t prepared? Or that they&#39;re waiting for sombody else to supply the necessary funds? Or they&#39;d rather have someone else risk their necks down on the ocean&#39;s bottom? Salvage is an old tradition, as old as seafaring itself. Why, after all these centuries, change anything now? If you, for instance, are so concerned about preserving what&#39;s left of those sunken hulls and their contents, why don &#39; t you create an organization of like-minded citizens, get it financed and begin saving what&#39;s left-before those looters get there first? Nobody&#39;s stopping you .. .. AL MILLER Prescott, Arizona

... or &quot;Not a Factor&quot; Clearly we differ [over the NMHS boycott of Sotheby&#39;s]. It is unfortunate that the National Maritime Historical Society takes the viewpoint that all commercial maritime archaeology is unacceptable. This viewpoint will lead to your organization not being a factor in the substantial amount of commercial maritime archaeology that is inevitably going to occur. A more enlightened approach could lead to your having a positive impact on improving the standards and the quality of the work which will be carried out. SEA HISTORY 51, AUTUMN 1989