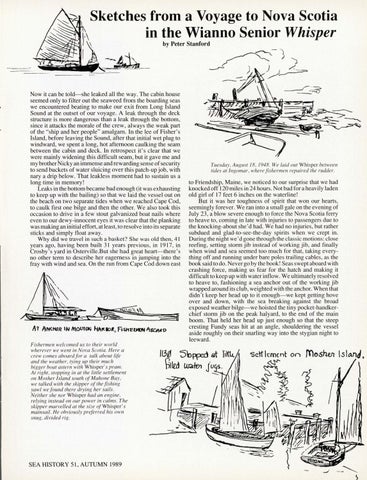 Now it can be told-she leaked all the way. The cabin house seemed only to filter out the seaweed from the boarding seas we encountered beating to make our exit from Long Island Sound at the outset of our voyage. A leak through the deck structure is more dangerous than a leak through the bottom, since it attacks the morale of the crew, always the weak part of the "ship and her people" amalgam. In the lee of Fisher's Island, before leaving the Sound, after that initial wet plug to windward, we spent a long, hot afternoon caulking the seam between the cabin and deck. In retrospect it's clear that we were mainly widening this difficult seam, but it gave me and my brother Nicky an immense and rewarding sense of security to send buckets of water sl uicing over this patch-up job, with nary a drip below. That leakless moment had to sustain us a long time in memory! Leaks in the bottom became bad enough (it was exhausting to keep up with the bailing) so that we laid the vessel out on the beach on two separate tides when we reached Cape Cod, to caulk first one bilge and then the other. We also took this occasion to drive in a few stout galvanized boat nails where even to our dewy-innocent eyes it was clear that the planking was making an initial effort, at least, to resolve into its separate sticks and simply float away . Why did we travel in such a basket? She was old then , 41 years ago, having been built 31 years previous, in 1917, in Crosby's yard in Osterville.But she had great heart-there 's no other term to describe her eagerness in jumping into the fray with wind and sea. On the run from Cape Cod down east

Fishermen welcomed us to their world wherever we went in Nova Scotia. Here a crew comes ahoard for a talk ahoul life and the weather, tying up their much /Jigger boat astern with Whisper' s pram. At right, stopping in at the little settlement on Mosher Island south of Mahon e Bay, we talked with the skipper of the fishing yawl we found there drying her sails. Neither she nor Whi sper had an engine, relying instead on oar power in calms. The skipper marvelled at the size ofWhisper's mainsail. He ohviously preferred his own snug, divided rig.

Tu esday, August 18, 1948. We laid out Whisper between tides at Ingamar, where fis hermen repaired the rudder.

to Friendship, Maine, we noticed to our surprise that we had knocked off 120 miles in 24 hours. Not bad for a heavily laden old girl of 17 feet 6 inches on the waterline! But it was her toughness of spirit that won our hearts, seemingly forever. We ran into a small gale on the evening of July 23, a blow severe enough to force the Nova Scotia ferry to heave to, coming in late with injuries to passengers due to the knocking-about she'd had . We had no injuries, but rather subdued and glad-to-see-the-day spirits when we crept in. During the night we'd gone through the classic motions: close reefing, setting storm jib instead of working jib, and finally when wind and sea seemed too much for that, taking everything off and running under bare poles trailing cables, as the book said to do . Never go by the book! Seas swept aboard with crashing force , making us fear for the hatch and making it difficult to keep up with water inflow. We ultimately resolved to heave to, fashioning a sea anchor out of the working jib wrapped around its club, weighted with the anchor. When that didn't keep her head up to it enough-we kept getting hove over and down, with the sea breaking agai nst the broad exposed weather bilge-we hoisted the tiny pocket-handkerchief storm jib on the peak halyard, to the end of the main boom. That held her head up just enough so that the steep cresting Fundy seas hit at an angle, shouldering the vessel aside roughly on their snarling way into the stygian night to leeward.