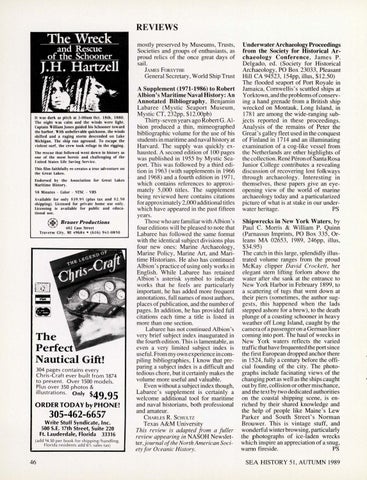 and Rescue of the Schooner

The night was calm and the winds were light. Captain William Jones guided his Schooner toward the harbor. With unbelievable quickness, the winds shifted and a raging storm descended on Lake Michigan . The ship ran aground. To escape the violent surf, the crew took refuge in the rigging. The rescue that followed went down in history as one of the most 'heroic and challenging of the United States Life Saving Service. This film faithfully re-creates a true adventure on the Great Lakes. Endorsed by the Association for Great Lakes Maritime History . 58 Minutes - Color - NTSC - VHS Available for only S39.95 (plus tax and S2.50 shipping). Licensed for private home use only. Licensing is available for public and educational use.

The Perfect Nautical Gift! 304 pages contains every Chris-Craft ever built from 1874 to present. Over 1500 models. Plus over 350 photos & illustrations. Only

mostly preserved by Museums, Trusts, Societies and groups of enthusiasts, as proud relics of the once great days of sai l. JAMES FORSYTHE

General Secretary, World Ship Trust A Supplement (1971-1986) to Robert Albion's Maritime Naval History: An Annotated Bibliography, Benjamin Labaree (Mystic Seaport Museum , Mystic CT, 232pp, $12.00pb) Thirty-seven years ago Robert G. Albion produced a thin, mimeographed bibliographic volume for the use of his students in maritime and naval history at Harvard. The supply was quickly exhausted. A second edition of 100 pages was published in 1955 by Mystic Seaport. This was followed by a third edition in 1963 (with supplements in 1966 and 1968) and a fourth edition in 197 l, which contains references to approximately 5,000 titles. The supplement being reviewed here contains citations for approximately 2,000 additional titles which have appeared in the past fifteen years . Those who are fami 1iar with Al bi on ' s four editions will be pleased to note that Labaree has followed the same format with the identical subject divisions plus four new ones: Marine Archaeology, Marine Policy, Marine Art, and Maritime Historians. He also has continued Albion's practice of using on! y works in English. While Labaree has retained Albion 's asterisk symbol to indicate works that he feels are particularly important, he has added more frequent annotations, full names of most authors, places of publication, and the number of pages. In addition, he has provided full citations each time a title is listed in more than one section . Labaree has not continued Albion's very brief subject index inaugurated in the fourth edition. This is lamentable, as even a very limited subject index is useful. From my own experience in compiling bibliographies, I know that preparing a subject index is a difficult and tedious chore, but it certainly makes the volume more useful and valuable. Even without a subject index though, Labaree 's supplement is certainly a welcome additional tool for maritime and naval historians, both professional and amateur. CHARLES R. SCHULTZ Texas A&M University This review is adapted from a fuller review appearing in NASOH Newsletter,journal of the North American Society for Oceanic History.

Underwater Archaeology Proceedings from the Society for Historical Archaeology Conference, James P. Delgado, ed. (Society for Historical Archaeology, PO Box 23033, Pleasant Hill CA 94523, 154pp, illus, $12.50) The flooded seaport of Port Royale in Jamaica, Comwellis's scuttled ships at Yorktown, and the problems of conserving a hand grenade from a British ship wrecked on Montauk, Long Island, in 1781 are among the wide-ranging subjects reported in these proceedings. Analysis of the remains of Peter the Great's galley fleet used in the conquest of Finland in 1714 and an illuminating examination of a cog-like vessel from the Netherlands are other highlights of the collection. Rene Peron of Santa Rosa Junior College contributes a revealing discussion of recovering lost folkways through archaeology. Interesting in themselves , these papers give an eyeopening view of the world of marine archaeology today and a particularized picture of what is at stake in our underwater heritage. PS Shipwrecks in New York Waters, by Paul C. Morris & William P. Quinn (Parnassus Imprints, PO Box 335, Orleans MA 02653, 1989, 246pp, illus, $34.95) The catch in this large, splendidly illustrated volume ranges from the proud McKay clipper David Crockett, her elegant stem lifting forlorn above the water after she sank at the entrance to New York Harbor in February 1899, to a scattering of tugs that went down at their piers (sometimes, the author suggests, this happened when the lads stepped ashore for a brew), to the death plunge of a coasting schooner in heavy weather off Long Island, caught by the camera of a passenger on a German I iner coming into port. The haul of wrecks in New York waters reflects the varied traffic that have frequented the port since the first European dropped anchor there in 1524, fully a century before the official founding of the city. The photographs include facinating views of the changing port as well as the ships caught out by fire, collision or other mischance, and the text by two dedicated authorities on the coastal shipping scene, is enriched by their shared knowledge and the help of people like Maine's Lew Parker and South Street's Norman Brouwer. This is vintage stuff, and wonderful winter browsing, particularly the photographs of ice-laden wrecks which inspire an appreciation of a snug, warm fireside. PS SEA HISTORY 51 , AUTUMN 1989