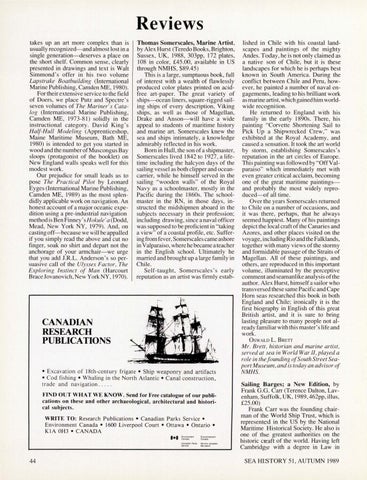 Reviews takes up an art more complex than is usually recognized-and almost lost in a single generation-deserves a place on the short shelf. Common sense, clearly presented in drawings and text is Walt Simmond' s offer in his two volume Lapstrake Boatbuilding (International Marine Publishing, Camden ME, 1980). For their extensive service to the field of Doers, we place Putz and Spectre's seven volumes of The Mariner's Catalog (International Marine Publi shing, Camden ME, 1973-81) so lidl y in the instructional category. David King' s Half-Hull Modeling (Apprenticeshop, Maine Maritime Museum , Bath ME, 1980) is intended to get yo u started in wood and the number ofM uscongus Bay sloops (protagon ist of the booklet) on New England walls speaks well for this modest work. Our prejudice for small leads us to pose The Practical Pilot by Leonard Eyges (International Marine Publishing, Camden ME, 1989) as the most splendidly applicable work on navigation. An honest account of a major oceanic expedition using a pre-industrial navigation method is Ben Finney' s H okule' a (Dodd, Mead, New York NY , 1979). And, on casti ng off-because we wi ll be appalled if yo u simply read the above and cut no finger, soak no shirt and depart not the anchorage of yo ur armchair-we urge that you add J .R.L. Anderson's so persuasive ca ll of the Ulysses Factor, The Exploring Instinct of Man (Harcourt Brace Jovanovich, New York NY, 1970).

Thomas Somerscales, Marine Artist, by Alex Hurst (Teredo Books, Brighton, Sussex , UK, 1988, 303pp, 172 plates, 108 in color, £45.00, avai lable in US through NMHS , $89.45) This is a large, sumptuous book, full of interest with a wealth of flawlessly produced color plates printed on acidfree art-paper. The great variety of ships--ocean liners, square-rigged sailing ships of every description, Viking ships, as well as those of Magellan, Drake and Anson-will have a wide appeal to students of maritime history and marine art. Somerscales knew the sea and ships intimately, a knowledge admirably reflected in his work. Born in Hull, the son of a shipmaster, Somerscales lived 1842 to 1927 , a lifetime including the halcyon days of the sai ling vessel as both clipper and oceancarrier, while he himself served in the sailing "wooden wall s" of the Royal Navy as a schoolmaster, mostly in the Pacific during the 1860s. The schoolmaster in the RN, in those days, instructed the midshipmen aboard in the subjects necessary in their profession; including drawing, since a naval officer was supposed to be proficient in " taking a view" of a coastal profile, etc. Suffering from fever, Somerscales came ashore in Valparaiso, where he became a teacher in the English school. Ultimately he married and brought up a large family in Chile. Self-taught, Somersca les 's early reputation as an artist was firmly estab-

• Excavati on of I 8t h-centur y frigate • Ship weaponry and artifacts • Cod fishing• Whaling in the North Atlantic• Canal constructio n, trade and navigation .. ... FIND OUT WHAT WE KNOW. Send for Free catalogue of our publications on these and other archaeological, architectural and historical subjects. WRITE TO: Research Publications • Canadian Parks Service • Environment Canada • 1600 Liverpool Court • Ottawa • Ontario • KIA OH3 • CANADA

lished in Chile with his coastal landscapes and paintings of the mighty Andes. Today , he is not only claimed as a native son of Chile, but it is these landscapes for which he is perhaps best known in South America. During the conflict between Chile and Peru, however, he painted a number of naval engagements, leading to hi s brilliant work as marine artist, which gained him worldwide recognition . He returned to Eng land with hi s family in the earl y 1890s. There, hi s painting "Corvette Shortening Sail to Pick Up a Shipwrecked Crew," was ex hibited at the Royal Academy , and caused a sensation. It took the art world by stonn, establi shing Somerscales 's reputation in the art circles of E urope. This painting was fol lowed by "Off Valparai so" which immediately met with even greater critical acclaim, becoming one of the great maritime paintingsand probably the most widely reproduced-of all time. Over the years Somerscales returned to Chi le on a number of occasions , and it was there, perhaps, that he always seemed happ iest. Many of hi s paintings depict the local craft of the Canaries and Azores, and other pl aces visited on the voyage, incl uding Rio and the Falklands, together with many views of the stormy and formida ble passage of the Straits of Magellan . All of these paintings, and others, are reproduced in thi s importan t volume, illuminated by the perceptive comment and seaman like analys is of the author. A lex Hurst, himself a sailor who transversed these same Pacific and Cape Horn seas researched this book in both Eng land and Chile; ironicall y it is the first biography in English of this great British artist, and it is sure to bring lasting pleasure to many people not already fami li ar with this master 's life and work. O SWALD L. BRETT

Mr. Brett, historian and marine artist, served at sea in World War II , played a role in the founding of South Street Sea~ port Museum, and is today an advisor of NMHS. Sailing Barges; a New Edition, by Frank G.G. Carr (Terence Dalton , Lavenham, Suffolk, UK, 1989, 462pp, illus, £25 .00) Frank Carr was the founding chairman of the World Ship Trust, which is represented in the US by the National Maritime Historical Society. He also is one of th1e g reatest authorities on the historic crraft of the world. Having left Cambridg~e with a degree in Law in SEA HI:STORY 51, AUTUMN 1989