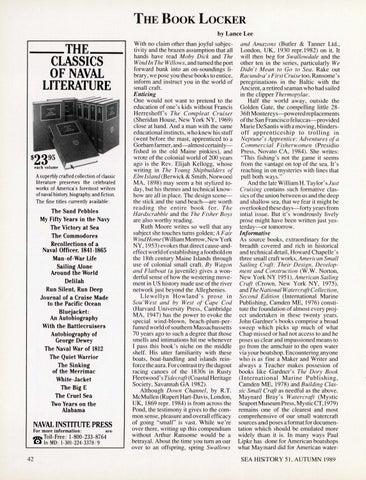 THE BOOK LOCKER by Lance Lee

_ _ THE _ _ CLASSICS OF NAVAL LITERATURE

The Sand Pebbles My Fifty Years in the Navy The Victory at Sea The Commodores Recollections of a Naval Officer, 1841-1865 Man-of-War Life Sailing Alone Around the World Delilah Run Silent, Run Deep Journal of a Cruise Made to the Pacific Ocean Bluejacket: An Autobiography With the Battlecruisers Autobiography of George Dewey The Naval War of 1812 The Quiet Warrior The Sinking of the Merrimac White-Jacket The Big E The Cruel Sea Two Years on the Alabama

With no claim other than joyful subjectivity and the brazen assumption that all hands have read Moby Dick and The Wind In The Willows, and turned the port forward bunk into an on-soundings library, we pose you these books to entice, inform and instruct you in the world of small craft.

Enticing One would not want to pretend to the education of one's kids without Francis Herreshoff's The Comp/eat Cruiser (Sheridan House, New York NY, 1969) close at hand . And a man with the same educational instincts, who knew his stuff (went before the mast, apprenticed to a Gorhamfarmer,and-almostcertainlyfished in the old Maine pinkies), and wrote of the colonial world of 200 years ago is the Rev. Elijah Kellogg, whose writing in The Young Shipbuilders of Elm Island (Berwick & Smith, Norwood MA, 1898) may seem a bit stylized today, but his themes and technical knowhow are all in place. The design scenethe stick and the sand beach-are worth reading the entire book for. The Hardscrabble and the The Fisher Boys are also worthy reading. Ruth Moore writes so well that any subject she touches turns golden ; A Fair

WindHome(WilliamMorrow,NewYork NY, 1953) evokes that direct cause-andeffect world of establishing a foothold on the 18th century Maine Islands through use of colonial small craft. By Wagon and Flatboat (a juvenile) gives a wonderful sense of how the westering movement in US history made use of the river network just beyond the Alleghenies. Llewellyn Howland 's pro se in

Sou'West and by West of Cape Cod (Harvard University Press, Cambridge MA, 1947) has the power to evoke the special wind-blown, beach-plum-perfumed world of southern Massachussetts 70 years ago to such a degree that those smells and intimations hit me whenever I pass this book 's niche on the middle shelf. His utter familiarity with these boats, boat-handling and islands reinforce the aura. For contrast try the dugout racing canoes of the 1830s in Rusty Fleetwood 's Tidecraft (Coastal Heritage Society, Savannah GA 1982). Although Down Channel, by R.T. McMullen (Rupert Hart-Davis, London, UK, 1869 repr. 1984) is from across the Pond, the testimony it gives to the common sense, pleasure and overall efficacy of going "small" is vast. While we're over there, writing up this compendium without Arthur Ransome would be a betrayal. About the time you tum an oar over to an offspring, spring Swallows

and Amazons (Butler & Tanner Ltd., London, UK, 1930 repr.1982) on it. It will then beg for Swallowdale and the other ten in the series, particularly We Didn' t Mean to Go to Sea. Rake out

Racundra' s FirstCruisetoo,Ransome's peregrinations in the Baltic with the Ancient, a retired seaman who had sailed in the clipper Thermopylae. Half the world away, outside the Golden Gate, the compelling little 2836ft Montereys-powered replacements of the San Francisco fel uccas-provided Marie DeSantis with a moving, blindersoff apprenticeship to trolling in

Neptune's Apprentice: Adventures of a Commercial Fisherwomen (Presidio Press, Novato CA, 1984). She writes: "Thi s fishing's not the game it seems from the vantage on top of the sea. It 's reaching in on mysteries with lines that pull both ways." And the late William H. Taylor's Just Cruising contains such formative classics of the union between us and the deep and shallow sea, that we fear it might be overlooked these days-forty years from intial issue. But it's wondrously lively prose might have been written just yesterday--or tomorrow .

Sailing Craft: Their Design, Development and Construction (W.W. Norton , New York NY 1951), American Sailing Craft (Crown, New York NY, 1975), and The National Watercraft Collection, Second Edition (International Marine Publi shing, Camden ME, 1976) constitute the foundation of almost every project undertaken in these twenty years. John Gardner's books comprise a broad sweep which picks up much of what Chap missed or had not access to and he poses us clear and impassioned means to go from the armchair to the open water via your boatshop. Encountering anyone who is as fine a Maker and Writer and always a Teacher makes possesion of books like Gardner's The Dory Book (International Marine Publishing , Camden ME, 1978) and Building Classic Small Craft as needful as the above. Maynard Bray 's Watercraft (Mystic Seaport Museum Press, Mystic CT, 1979) remains one of the clearest and most comprehensive of our small watercraft sources amd poses a format for documentation whiich should be emulated more widely th<an it is. In many ways Paul Lipke has ' done for American boats hops what Mayrnard did for American waterSEA HISTORY 51, AUTUMN 1989