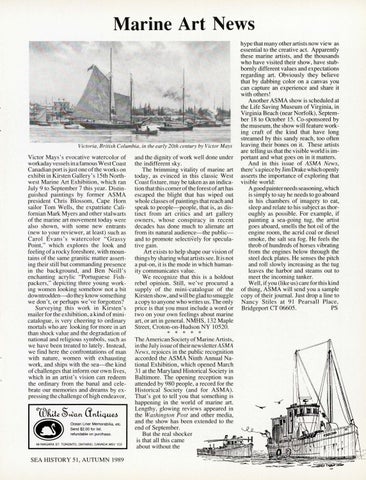 Victor Mays&#39;s evocative watercolor of workaday vessels in a famous West Coast Canadian port is just one of the works on exhibit in Kirsten Gallery&#39;s 15th Northwest Marine Art Exhibition, which ran July 9 to September 7 thi s year. Distinguished paintings by former ASMA president Chris Blossom, Cape Hom sailor Tom Wells, the expatriate Californian Mark Myers and other stalwarts of the marine art movement today were also shown, with some new entrants (new to your reviewer, at least) such as Carol Evans &#39;s watercolor &quot;Grassy Point,&quot; which explores the look and feeling of a rocky foreshore, with mountains of the same granitic matter asserting their still but commanding presence in the background, and Ben Neill&#39;s enchanting acrylic &quot;Portuguese Fishpackers,&quot; depicting three young working women looking somehow not a bit downtrodden--&lt;lo they know something we don &#39; t, or perhaps we &#39; ve forgotten? Surveying this work in Kirsten&#39;s mailer for the exhibition, a kind of minicatalogue, is very cheering to ordinary mortals who are looking for more in art than shock value and the degradation of national and religious symbols, such as we have been treated to lately. Instead, we find here the confrontations of man with nature, women with exhausting work, and ships with the sea-the kind of challenges that inform our own lives, which in an artist&#39;s vision can redeem the ordinary from the banal and celebrate our memories and dreams by expressing the challenge of high endeavor,

and the dignity of work well done under the indifferent sky. The brimming vitality of marine art today, as evinced in this classic West Coast fixture, may be taken as an indication that this corner of the forest of art has escaped the blight that has wiped out whole classes of paintings that reach and speak to people-people, that is, as distinct from art c&#39;ritics and art gallery owners, whose conspiracy in recent decades has done much to alienate art from its natural audience-the publicand to promote selectiÂĽely for speculative gain. Art exists to help shape our vision of things by sharing what artists see. It is not a put-on, it is the mode in which humanity communicates value. We recognize that this is a holdout rebel opinion. Still, we&#39;ve procured a supply of the mini~catalogue of the Kirsten show, and wi II be glad to smuggle a copy to anyone who writes us. The only price is that you must include a word or two on your own feelings about marine art, or art in general. NMHS, 132 Maple Street, Croton-on-Hudson NY 10520.

The American Society of Marine Artists, in the July issue of theirnewsletter ASMA News, rejoices in the public recognition accorded the ASMA Ninth Annual National Exhibition, which opened March 31 at the Maryland Historical Society in Baltimore. The opening reception was attended by 980 people, a record for the Historical Society (and for ASMA). That&#39;s got to tell you that something is happening in the world of marine art. Lengthy, glowing reviews appeared in the Washington Post and other media, and the show has been extended to the end of September. But the real shocker is that all this came about without the

hype that many other artists now view as essential to the creative act. Apparently these marine artists, and the thousands who have visited their show, have stubbornly different values and expectations regarding art. Obviously they believe that by dabbing color on a canvas you can capture an experience and share it with others! Another ASMA show is scheduled at the Life Saving Museum of Virginia, in Virginia Beach (near Norfolk), September 18 to October 15. Co-sponsored by the museum, the show will feature working craft of the kind that have long streamed by thi s sandy reach, too often leaving their bones on it. These artists are telling us that the visible world is important and what goes on in it matters. And in this issue of ASMA News, there&#39;sapiece by Jim Drake which openly asserts the importance of exploring that visible world: A good painter needs seasoning, which is simply to say he needs to go aboard in his chambers of imagery to eat, sleep and relate to his subject as thoroughly as possible. For example, if painting a sea-going tug, the artist goes aboard, smells the hot oil of the engine room, the acrid coal or diesel smoke, the salt sea fog. He feels the throb of hundreds of horses vibrating from the engines below through the steel deck plates. He senses the pitch and roll slowly increasing as the tug leaves the harbor and steams out to meet the incoming tanker. Well, if you (like us) care for this kind of thing, ASMA will send you a sample copy of their journal. Just drop a line to Nancy Stiles at 91 Pearsall Place, Bridgeport CT 06605. PS