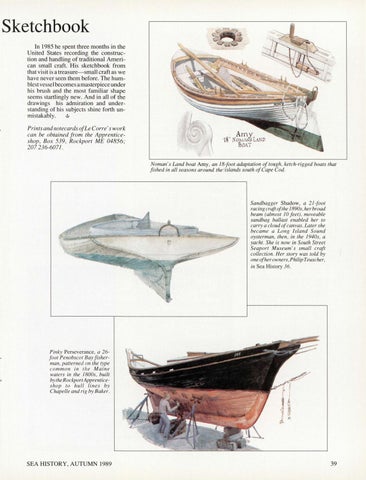 Sketchbook In 1985 he spent three months in the United States recording the construction and handling of traditional American small craft. His sketchbook from that vi sit is a treasure-small craft as we have never seen them before. The humblest vessel becomes a masterpiece under hi s brush and the most familiar shape seems startlingly new . And in all of the drawings his admiration and understanding of hi s subjects shine forth unmistakably. .ti Prints and notecards of Le Corre&#39; s work can be obtained from the Apprenticeshop , Box 539, Rockport ME 04856; 207 236-6071 .

Noman&#39; s Land boat Amy , an 18-foot adaptation of tough, ketch-rigged boats that fished in all seasons around the /islands south of Cape Cod.

Sandbagger Shadow, a 21-foot racing craft of the 1890s, herbroad beam (almost JO f eet), moveable sandbag ballast enabled her to carry a cloud of canvas. Later she became a Long Island Sound oysterman, then, in the 1940s, a yacht. She is now in South Street Seaport Mu seum&#39;s small craft collection. Her story was told by one of her owners, Philip Teuscher, in Sea History 36.

Pinky Perseverance, a 26foo t Penobscot Bay f isherman, patterned on the type co mm on in the Main e waters in the 1800s, built by the Rockport Apprentices hop to hull lin es by Chapelle and rig by Baker.