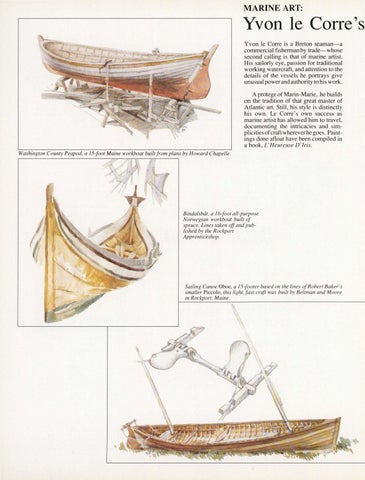 Yvon le Corre's Yvon le Corre is a Breton seaman-a commercial fisherman by trade-whose second calling is that of marine artist. His sailorly eye, passion for traditional working watercraft, and attention to the details of the vessels he portrays give unusual power and authority to his work. A protege of Marin-Marie, he builds on the tradition of that great master of Atlantic art. Still , his style is distinctly his own. Le Corre 's own success as marine artist has allowed him to travel , documenting the intricacies and simplicities of craftwhereverhe goes. Paintings done afloat have been compiled in a book, L ' H eureuse D ' Iris. Washington County Peapod, a 15joot Maine workboat built from plans by Howard Chapelle.

Bindalsbdt, a 16joot all-purpose Norwegian workboat built of spruce. Lines taken off and published by the Rockport Apprenticeshop.

Sailing Canoe Oboe, a 15-footer based on the lines of Robert Baker's smaller Piccolo, this light,fast craft was built by Bettman and Moore in Rockport , Maine .