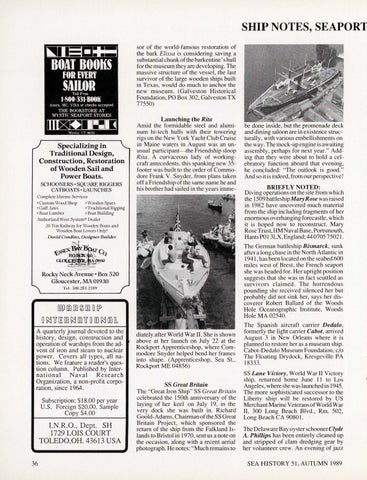 SHIP NOTES, SEAPORT sor of the world-famous restoration of the bark Elissa is considering saving a substantial chunk of the barkentine ' s hull for the museum they are developing. The massive structure of the vessel, the last survivor of the large wooden ships built in Texas, would do much to anchor the new museum. (Galveston Historical Foundation, PO Box 302, Galveston TX 77550)

Launching the Rita Amid the formidable steel and aluminum hi-tech hulls with their towering rigs on the New York Yacht Club Cruise in Maine waters in August was an unusual participant- the Friendship sloop Rita. A curvaceous lady of workingcraft antecedents, this spanking new 35footer was built to the order of Commodore Frank V. Snyder, from plans taken off a Friendship of the same name he and hi s brother had sailed in the years imme-

D~TI'~ 00 ~ OOiJ' D®~ CNHL A quarterly journal devoted to the history, design, construction and operation of warships from the advent of iron and steam to nuclear power. Covers all types, all nations. We feature a reader's question column. Published by International Naval Research Organization, a non-profit corporation, since 1964. Subscription: $18.00 per year U.S. Foreign $20.00. Sample Copy $4.00

BRIEFLY NOTED: Diving operations on the site from which the 1509 battleship Mary Rose was raised in 1982 have uncovered much material from the ship including fragments of her enormous overhanging forecastle, which it is hoped now to reconstruct. Mary Rose Trust, HM Naval Base, Portsmouth, Han ts PO I 3LX, England; 44 0705 7 5021. The German battleship Bismarck, sunk after a long chase in the North Atlantic in 1941 , has been located on the seabed 600 miles west of Brest, the French seaport she was headed for. Her upright position suggests that she was in fact scuttled as survivors claimed. The horrendous pounding she received silenced her but probably did not sink her, says her discoverer Robert Ballard of the Woods Hole Oceanographic Institute, Woods Hole MA 02540.

be done inside, but the promenade deck and dining saloon are in existence structurally , with various embellishments on the way. The mock-up engine is awaiting assembly, perhaps for next year. " Adding that they were about to hold a celebratory function aboard that evening, he concluded: "The outlook is good." And so it is indeed, from our perspective!

diately after World War II. She is shown above at her launch on July 22 at the Rockport Apprenticeshop, where Commodore Snyder helped bend her frames into shape. (Apprenticeshop, Sea St., Rockport ME 04856)

SS Great Britain The "Great Iron Ship" SS Great Britain celebrated the 150th anniversary of the laying of her keel on July 19, in the very dock she was built in. Richard Goold-Adams, Chairman of the SS Great Britain Project, which sponsored the return of the ship from the Falkland Islands to Bristol in 1970, sent us a note on the occasion, along with a recent aerial photograph. He notes: "Much remains to

The Spanish aircraft carrier Dedalo, formerly the light carrier Cabot, arrived August 3 in New Orleans where it is planned to restore her as a museum ship. Cabot-Dedalo Museum Foundation, c/o The Floating Dry dock, Kresgeville PA 18333. SS Lane Victory , World War II Victory ship, returned home June 11 to Los Angeles , where she was launched in 1945. The more sophisticated successor to the Liberty ship will be restored by US Merchant Marine Veterans ofWorld War II, 300 Long Beach Blvd., Rm. 502, Long Beach CA 90801. The Delaware Bay oyster schooner Clyde A. Phillips has been entirely cleaned up and stripped of clam dredging gear by her volunteer crew. An evening of jazz SEA HISTORY 51 , AUTUMN 1989