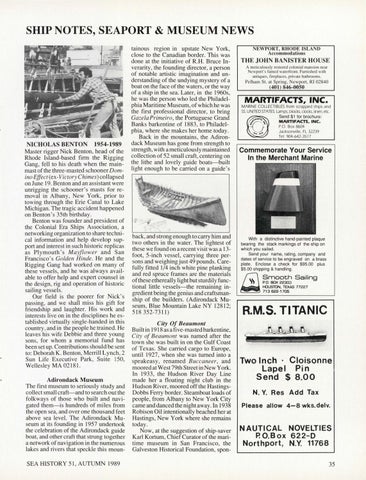 Master rigger Nick Benton, head of the Rhode Island-based firm the Rigging Gang, fell to his death when the mainmast of the three-masted schooner Domino Ejfect(ex-VictoryChimes) collapsed on June 19. Benton and an assistant were unrigging the schooner&#39;s masts for removal in Albany, New York, prior to towing through the Erie Canal to Lake Michigan. The tragic accident happened on Benton &#39;s 35th birthday. Benton was founder and president of the Colonial Era Ships Association, a networking organization to share technical information and help develop support and interest in such historic replicas as Plymouth &#39; s Mayflower and San Francisco &#39;s Golden Hinde. He and the Rigging Gang had worked on many of these vessels, and he was always available to offer help and expert counsel in the design, rig and operation of hi storic sailing vessels. Our field is the poorer for Nick&#39;s passing, and we shall miss his gift for friendship and laughter. His work and interests live on in the disciplines he established virtually single-handed in this country, and in the people he trained. He leaves his wife Debbie and three young sons, for whom a memorial fund has been set up. Contributions should be sent to: Deborah K. Benton, Merrill Lynch , 2 Sun Life Executive Park, Suite 150, Wellesley MA 02181.

Adirondack Museum The first museum to seriously study and collect small craft-and to search out the folkways of those who built and navigated them-is hundreds of miles from the open sea, and over one thousand feet above sea level. The Adirondack Museum at its founding in 1957 undertook the celebration of the Adirondack guide boat, and other craft that strung together a network of navigation in the numerous lakes and rivers that speckle this mounSEA HISTORY 51, AUTUMN 1989

tainous region in upstate New York, close to the Canadian border. This was done at the initiative of R.H. Bruce Inverarity, the fo unding director, a person of notable artistic imagination and understanding of the undying mystery of a boat on the face of the waters, or the way of a ship in the sea. Later, in the 1960s, he was the person who led the Philadelphia Maritime Museum, of which he was the first professional director, to bring GazelaPrimeiro, the Portuguese Grand Banks barkentine of 1883 , to Philadelphia, where she makes her home today. Back in the mountains, the Adirondack Museum has gone from strength to strength, with a meticulously maintained collection of 52 small craft, centering on the lithe and lovely guide boats-built light enough to be carried on a guide&#39;s

back, and strong enough to carry him and two others in the water. The lightest of these we found on a recent visit was a 13foot, 5-inch vessel, carrying three persons and weighingjust49 pounds. Carefully fitted 1/4 inch white pine planking and red spruce frames are the materials of these ethereally I ight but sturdily functional little vessels-the remaining ingredient being the genius and craftsmanship of the builders. (Adirondack Museum, Blue Mountain Lake NY 12812; 518 352-731 I)

Commemorate Your Service In the Merchant Marine

With a distinctive hand-painted plaque bearing the stack markings of the ship on which you sai led. Send your name, rating , company and dates of service to be engraved on a brass plate. Enclose a check for $95.00 plus $5.00 shipping &amp; handling.

City Of Beaumont Built in 1918 as a five-masted barkentine, City of Beaumont was named after the town she was built in on the Gulf Coast of Texas. She carried cargo to Europe, until 1927, when she was turned into a speakeasy, renamed Buccaneer, and moored at West 79th Street in New York. In 1933, the Hudson River Day Line made her a floating night club in the Hudson River, moored off the HastingsDobbs Ferry border. Steamboat loads of people, from Albany to New York City came and danced the night away. In 1938 Robison Oil intentionally beached her at Hastings, New York where she remains today. Now, at the suggestion of ship-saver Karl Kortum, Chief Curator of the maritime museum in San Francisco, the Galveston Historical Foundation, spon-