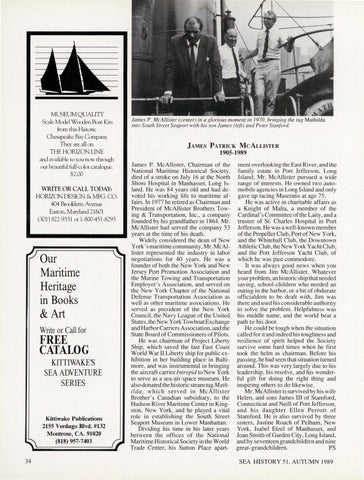 Chesapeake Bay Company. They are all on

THE HORIZON LINE and available to you now through our beautiful full-color catalogue. $2.00

Our Maritime Heritage in Books &Art Write or Call for

James P. McAllister (center) in a glorious moment in 1970, bringing the tug Mathi lda into South Street Seaport with his son James (left) and Peter Stanford.

James P. McAllister, Chairman of the ment overlooking the East River, and the National Maritime Historical Society, family estate in Port Jefferson, Long died of a stroke on July 16 at the North Island , Mr. McAlli ster pursued a wide Shore Hospital in Manhasset, Long Is- range of interests. He owned two autoland. He was 84 years old and had de- mobi le agencies in Long Island and only voted his working life to maritime af- gave up racing Maserati s at age 75 . fairs. In 1977 he retired as Chairman and He was active in charitable affairs as President of McAllister Brothers Tow- a Knight of Malta, a member of the ing & Transportation, Inc., a company Cardinal's Committee of the Laity , and a founded by hi s grandfather in 1864. Mr. trustee of St. Charles Hospital in Port McAlli ster had served the company 53 Jefferson. He was a well -known member of the Propeller Club, Port of New York, years at the time of his death. Widely considered the dean of New and the Whitehall Club, the Downtown York 's maritime community, Mr. McAl - Ath letic Club, the New York Yacht Club, lister represented the industry in labor and the Port Jefferson Yacht Club, of negotiations for 40 years. He was a which he was past commodore. founder of both the New York and New It was always good news when you Jersey Port Promotion Association and heard from Jim McAllister. Whatever the Marine Towing and Transportation your problem, an historic ship that needed Employer's Association, and served on sav ing, school-children who needed an the New York Chapter of the National outing in the harbor, or a bit of obdurate Defense Transportation Association as officialdom to be dealt with, Jim was well as other maritime associations. He there and used his considerable authority served as president of the New York to solve the problem. Helpfu lness was Council, the Navy League of the United his middle name, and the world beat a States, the New York Towboat Exchange path to hi s door. and Harbor Carriers Association , and the He could be tough when the situation State Board of Commissioners of Pilots. called for it and indeed his to ughness and He was chairman of Project Liberty resilience of spirit helped the Society Ship, which saved the last East Coast survive some hard times when he first World War II Liberty ship for public ex- took the helm as chairman. Before his hibition in her building place in Balti- passing, he had seen that situation turned more, and was instrumental in bringing around. This was very largely due to his the aircraft carrier Intrepid to New York leadership, his resolve, and his wonderto serve as a sea-air-space museum . He ful gift for doing the right thing and also donated the historic steam tug Math- inspiring others to do likewise. i lda , which se rved in McAlli s ter Mr. McAllister is survived by hi s wife Brother's Canadian subsidiary, to the Helen , and sons James III of Stamford, Hudson Ri ver Maritime Center in King- Connecticut and N~ill of Port Jefferson, ston , New York, and he played a vital and his da ughter Ellen Perrott of role in establishing the South Street Stamford. He is also survived by three Seaport Museum in Lower Manhattan . sisters, Justine Roach of. Pelham, New Dividing hi s time in his later years York , Isabel Etzel of Manhasset, and between the offices of the National Joan Smith of Garden City, Long Island, Maritime Historical Society in the World and by seventeen grandchildren and nine PS Trade Center, his Sutton Place apart- great-grandchildren. SEA HISTORY 51, AUTUMN 1989