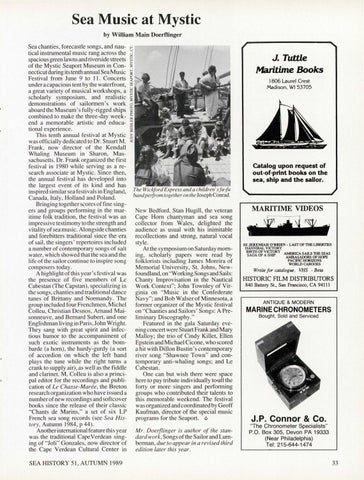 Sea chanties, forecastle songs, and nautical instrumental music rang across the spacious green lawns and riverside streets of the Mystic Seaport Museum in Connecticutduring its tenth annual Sea Music Festival from June 9 to 11. Concerts under a capacious tent by the waterfront, a great variety of musical workshops, a scholarly symposium, and realistic demonstrations of sailormen's work aboard the Museum's fully-rigged ships combined to make the three-day weekend a memorable artistic and educational experience. This tenth annual festival at Mystic was officially dedicated to Dr. Stuart M. Frank, now director of the Kendall Whaling Museum in Sharon, Massachusetts. Dr. Frank organized the first festival in 1980 while serving as a research associate at Mystic. Since then, the annual festival has developed into the largest event of its kind and has inspired similar sea festivals in England, Canada, Italy, Holland and Poland. Bringing together scores of fine singers and groups performing in the maritime fo lk tradition, the festival was an impressive testimony to the strength and vitality of sea music. Alongside chanties and foreb itters traditional since the era of sail, the singers' repertoires included a number of contemporary songs of salt water, which showed that the sea and the life of the sailor continue to inspire song composers today. A highlight of this year's festival was the presence of five members of Le Cabestan (The Capstan), specializing in the songs, chanties and traditional dance tunes of Brittany and Normandy. The group included four Frenchmen, Michel Col leu , Christian Desnos, Arnaud Maisonneuve, and Bernard Subert, and one Englishman living inParis,John Wright. They sang with great spirit and infectious humor to the accompaniment of such exotic instruments as the bombarde (a horn), the hurdy-gurdy (a sort of accordion on which the left hand plays the tune while the right turns a crank to supply air), as well as the fiddle and clarinet. M. Colleu is also a principal editor for the recordings and publication of Le Chasse-Maree, the Breton research organization who have issued a numberof new recordings and softcover books since the release of their classic "Chants de Marins," a set of six LP French sea song records (see Sea History, Autumn 1984, p 44). Another international feature this year was the traditional CapeVerdean singing of "Joli" Gonzales, now director of the Cape Verdean Cultural Center in SEA HISTORY 51 , AUTUMN 1989

Catalog upon request of out-of-print books on the sea, ship and the sailor. The Wickford Express and a children' sfu-fu band perfrom together on the Joseph Conrad.

New Bedford. Stan Hugill , the veteran Cape Hom chantyman and sea song collector from Wales, delighted the audience as usual with his inimitable recollections and strong, natural vocal style. At the symposium on Saturday morning, scholarl y papers were read by folklorists including James Moreira of Memorial University, St. Johns, Newfoundland, on "Working Songs and Sails: Chanty Improvisation in the Nautical Work Context"; John Townley of Virginia on "Music in the Confederate Navy"; and Bob WalserofMinnesota, a former organizer of the Mystic festival on "Chan ties and Sailors' Songs: A Preliminary Discography." Featured in the gala Saturday evening concert were Stuart Frank and Mary Malloy; the trio of Cindy Killet, Ellen Epstein and Michael Ci cone, who scored a hit with Dillon Bustin 's contemporary river song "Shawnee Town" and contemporary anti-whaling songs; and Le Cabestan . One can but wish there were space here to pay tribute individually toâ&#x20AC;˘all the forty or more singers and performing groups who contributed their talents to this memorable weekend. The festival was organized and coordinated by Geoff Kaufman, director of the special music programs for the Seaport. ..t Mr. Doerflinger is author of the standard work, Songs of the Sailor and Lumberman, due to appear in a revised third edition later this year.