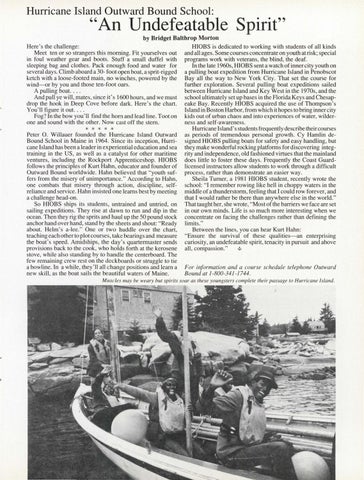 &#39;&#39;An Undefeatable Spirit&#39;&#39; by Bridget Balthrop Morton Here&#39;s the challenge: HIOBS is dedicated to working with students of all kinds Meet ten or so strangers this morning. Fit yourselves out and all ages. Some courses concentrate on youth at risk; special in foul weather gear and boots. Stuff a small duffel with programs work with veterans, the blind, the deaf. In the late 1960s, HI OBS sent a watch of inner city youth on sleeping bag and clothes. Pack enough food and water for several days. Climb aboard a 30- foot open boat, a sprit-rigged a pulling boat expedition from Hurricane Island in Penobscot ketch with a loose-footed main, no winches, powered by the Bay all the way to New York City. That set the course for further exploration. Several pulling boat expeditions sailed wind--0r by you and those ten-foot oars. A pulling boat. . .. between Hurricane Island and Key West in the 1970s, and the And pull ye will, mates, since it&#39;s 1600 hours, and we must school ultimately set up bases in the Florida Keys and Chesapdrop the hook in Deep Cove before dark. Here&#39;s the chart. eake Bay. Recently HIOBS acquired the use of Thompson &#39;s You&#39;ll figure it out. ... Island in Boston Harbor, from which it hopes to bring inner city Fog? In the bow you &#39; II find the horn and lead line. Toot on kids out of urban chaos and into experiences of water, wilderone and sound with the other. Now cast off the stem . ness and self-awareness. Hurricane Island &#39;s students frequently describe their courses * * * * * Peter 0 . Willauer founded the Hurricane Island Outward as periods of tremendous personal growth. Cy Hamlin deBound School in Maine in 1964. Since its inception, Hurri- signed HIOBS pulling boats for safety and easy handling, but cane Island has been a leader in experiential education and sea they make wonderful rocking platforms for discovering integtraining in the US, as well as a catalyst for other maritime rity and independence, old fashioned virtues that the mainland ventures, including the Rockport Apprenticeshop. HIOBS does little to foster these days. Frequently the Coast Guardfollows the principles of Kurt Hahn, educator and founder of licensed instructors allow students to work through a difficult Outward Bound worldwide. Hahn believed that &quot;youth suf- process, rather than demonstrate an easier way. fers from the misery of unimportance.&quot; According to Hahn, Sheila Turner, a 1981 HIOBS student, recently wrote the one combats that misery through action, discipline, self- school : &quot;I remember rowing like hell in choppy waters in the reliance and serv ice. Hahn insisted one learns best by meeting middle of a thunderstorm, feeling that I could row forever, and a challenge head-on. that I would rather be there than anywhere else in the world.&quot; So HIOBS ships its students, untrained and untried, on That taught her, she wrote, &quot;Most of the barriers we face are set sailing expeditions. They ri se at dawn to run and dip in the in our own minds. Life is so much more interesting when we ocean. Then they rig the sprits and haul up the 50 pound stock concentrate on facing the challenges rather than defining the anchor hand over hand, stand by the sheets and shout: &quot;Ready limits.&quot; about. Helm &#39;s a-lee.&quot; One or two huddle over the chart, Between the lines, you can hear Kurt Hahn: teaching each other to plot courses, take bearings and measure &quot;Ensure the survival of these qualities-an enterprising the boat&#39;s speed. Amidships, the day &#39;s quartermaster sends curiosity, an undefeatable spirit, tenacity in pursuit and above provisions back to the cook, who holds forth at the kerosene all, compassion.&quot; .ti stove, while also standing by to handle the centerboard. The few remaining crew rest on the deckboards or struggle to tie abowline. In a while, they &#39; ll all change positions and learn a For information and a course schedule telephone Outward Bound at 1-800-341-1744. new skill, as the boat sails the beautiful waters of Maine.