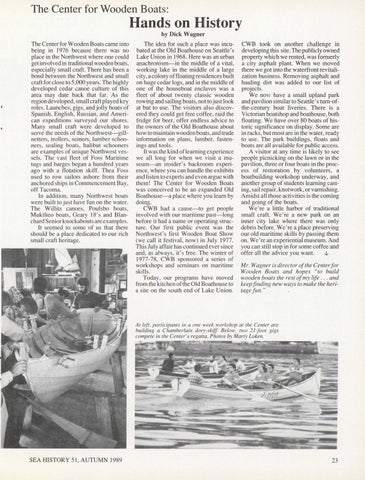 The Center for Wooden Boats:

Hands on History by Dick Wagner

The Center for Wooden Boats came into being in 1976 because there was no place in the Northwest where one could get involved in traditional wooden boats, especially small craft. There has been a bond between the Northwest and small craft for close to 5,000 years. The highly developed cedar canoe culture of this area may date back that far. As the region developed, small craft played key roles. Launches, gigs, and jolly boats of Spanish, English, Russian, and American expeditions surveyed our shores. Many small craft were developed to serve the needs of the Northwest-gillnetters, trailers, seiners, lumber schooners, sealing boats, halibut schooners are examples of unique Northwest vessels. The vast fleet of Foss Maritime tugs and barges began a hundred years ago with a flotation skiff. Thea Foss used to row sailors ashore from their anchored ships in Commencement Bay, off Tacoma. In addition, many Northwest boats were built to just have fun on the water. The Willits canoes, Poulsbo boats, Mukilteo boats, Geary 18's and Blanchard Senior knockabouts are examples. It seemed to some of us that there should be a place dedicated to our rich small craft heritage.

The idea for such a place was incubated at the Old Boathouse on Seattle's Lake Union in 1968. Here was an urban anachronism-in the middle of a vital, working lake in the middle of a large city, a colony offloating residences built on huge cedar logs, and in the middle of one of the houseboat enclaves was a fleet of about twenty classic wooden rowing and sailing boats, not to just look at but to use. The visitors also discovered they could get free coffee, raid the fridge for beer, offer endless advice to the owners of the Old Boathouse about how to maintain wooden boats, and trade information on plans, lumber, fastenings and tools. It was the kind oflearning experience we all long for when we visit a museum-an insider's backroom experience, where you can handle the exhibits and listen to experts and even argue with them! The Center for Wooden Boats was conceived to be an expanded Old Boathouse-a place where you learn by doing. CWB had a cause-to get people involved with our maritime past-long before it had a name or operating structure. Our first public event was the Northwest 's first Wooden Boat Show (we call it festival , now) in July 1977. This July affair has continued ever since and, as always, it 's free. The winter of 1977-78, CWB sponsored a series of workshops and seminars on maritime skills. Today, our programs have moved from the kitchen of the Old Boathouse to a site on the south end of Lake Union.

CWB took on another challenge in developing this site. Thepublicly-0wned property which we rented, was formerly a city asphalt plant. When we moved there we got into the waterfront revitalization business. Removing asphalt and hauling dirt was added to our list of projects. We now have a small upland park and pavilion similar to Seattle's tum-ofthe-century boat liveries. There is a Victorian boatshop and boathouse, both floating. We have over 80 boats of historic significance on display. Some are in racks, but most are in the water, ready to use. The park buildings, floats and boats are all available for public access. A visitor at any time is likely to see people picnicking on the lawn or in the pavilion, three or four boats in the process of restoration by volunteers, a boatbuilding workshop underway, and another group of students learning casting, sail repair, knotwork, or varnishing. Amidst all those activities is the coming and going of the boats. We're a little harbor of traditional small craft. We ' re a new park on an inner city lake where there was only debris before. We' re a place preserving our old maritime skills by passing them on. We 're an experiential museum. And you can still stop in for some coffee and .i, offer all the advice you want. Mr. Wagner is director of the Center for Wooden Boats and hopes "to build wooden boats the rest of my life ... and keep finding new ways to make the heritage fun."

At left, participants in a one week workshop at the Center are building a Chamberlain do1y-skiff. Below, two 2ljoot gigs compete in the Center's regatta. Photos by Marty Loken.