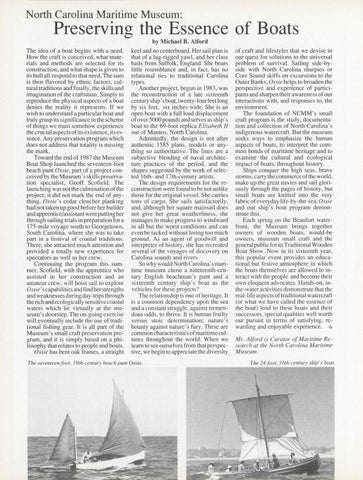 Preserving the Essence of Boats by Michael B. Alford The idea of a boat begins with a need. How the craft is conceived, what materials and methods are selected for its construction, and what shape is given to its hull all respond to that need. The sum is then flavored by ethnic factors, cultural traditions and finally, the skills and imagination of the craftsman. Simply to reproduce the physical aspects of a boat denies the reality it represents. If we wish to understand a particular boat and truly grasp its significance in the scheme of things we must somehow experience the crucial aspects of its existence, its essence. Any preservation program which does not address that totality is missing the mark. Toward the end of 1987 the Museum Boat Shop launched the seventeen-foot beach punt Ossie, part of a project conceived by the Museum&#39;s skills preservation specialist, Geoff Scofield. The launching was not the culmination of the project; it did not mark the end of anything. Ossie&#39;s cedar clencher planking had not taken up good before her builder and apprentice/assistant were putting her through sailing trials in preparation for a 175-mile voyage south to Georgetown, South Carolina, where she was to take part in a festival of coastal traditions. There, she attracted much attention and provided a totally new experience for spectators as well as her crew. Continuing the program this summer, Scofield, with the apprentice who assisted in her construction and an amateur crew, will hoist sail to explore Ossie&#39; s capabilities and find her strengths and weaknesses during day-trips through the rich and ecologically sensitive coastal waters which lie virtually at the museum&#39;s doorstep. The on-going exercise will eventually include the use of traditional fishing gear. It is all part of the Museum&#39;s small craft preservation program, and it is simply based on a philosophy that relates to people and boats. Ossie has bent oak frames, a straight

keel and no centerboard. Her sail plan is that of a lug-rigged yawl, and her class hails from Suffolk, England. She bears little resemblance and, in fact, has no relational ties to traditional Carolina types. Another project, begun in 1983, was the reconstruction of a late sixteenth century ship&#39;s boat, twenty-four feet long by six feet, six inches wide. She is an open boat with a full load displacement of over 5000 pounds and serves as ship&#39;s boat to the 69-foot replica Elizabeth II out of Manteo, North Carolina. Admittedly, the design is not after authentic 1585 plans, models or anything so authoritative. The lines are a subjective blending of naval architecture practices of the period, and the shapes suggested by the work of selected 16th- and I 7th-century artists. The design requirements for the reconstruction were found to be not unlike those for the original vessel. She carries tons of cargo. She sails satisfactorily, and, Âˇalthough her square mainsail does not give her great weatherliness, she manages to make progress to windward in all but the worst conditions and can even be tacked without losing too much ground. As an agent of goodwill and interpreter of history, she has recreated several of the voyages of discovery on Carolina sounds and rivers. So why would North Carolina&#39;s maritime museum chose a nineteenth-century English beachman&#39;s punt and a sixteenth century ship&#39;s boat as the vehicles for these projects? The relationship is one of heritage. It is a common dependency upon the sea and a constant struggle, against tremendous odds, to thrive. It is human frailty versus stoic determination; nature&#39;s bounty against nature&#39;s fury. These are common characteristics of maritime cultures throughout the world. When we learn to see ourselves from that perspective, we begin to appreciate the diversity

of craft and lifestyles that we devise in our quest for solutions to the universal problem of survival. Sailing side-byside with North Carolina sharpies or Core Sound skiffs on excursions to the Outer Banks, Ossie helps to broaden the perspective and experience of participants and sharpen their awareness of our interactions with, and responses to, the environment. The foundation of NCMM&#39;s small craft program is the study, documentation and collection of North Carolina&#39;s indigenous watercraft. But the museum seeks ways to emphasize the human aspects of boats, to interpret the common bonds of maritime heritage and to examine the cultural and ecological impact of boats, throughout history. Ships conquer the high seas, brave storms, carry the commerce of the world, make up the great navies and sail gloriously through the pages of history, but small boats are knitted into the very fabric of everyday life-py-the-sea. Ossie and our ship&#39;s boat program demonstrate this. Each spring on the Beaufort waterfront, the Museum brings together owners of wooden boats, would-be owners, museum small craft and the general public for its Traditional Wooden Boat Show. Now in its sixteenth year, this popular event provides an educational but festive atmosphere in which the boats themselves are allowed to interact with the people and become their own eloquent advocates. Hands-on, inthe-water activities demonstrate that the real-life aspects of traditional watercraft (or what we have called the essence of the boat) lend to these boats and their successors, special qualities well worth our pursuit in terms of satisfying, rewarding and enjoyable experience. ..t