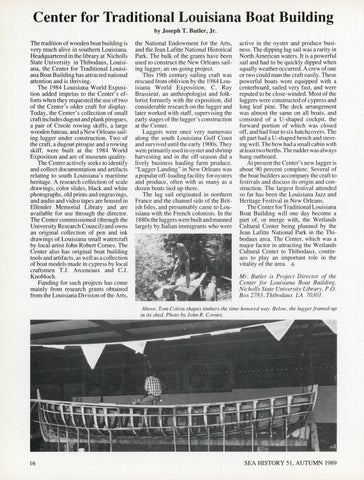 The tradition of wooden boat building is very much alive in southern Louisiana. Headquartered in the library at Nicholls State University in Thibodaux, Louisiana, the Center for Traditional Louisiana Boat Building has attracted national attention and is thriving. The 1984 Louisiana World Exposition added impetus to the Center's efforts when they requested the use of two of the Center's older craft for display. Today, the Center's collection of small craft includes dugout and plank pirogues, a pair of Creole rowing skiffs, a large wooden bateau, and a New Orleans sailing lugger under construction. Two of the craft, a dugout pirogue and a rowing skiff, were built at the 1984 World Exposition and are of museum quality. The Center actively seeks to identify and collect documentation and artifacts relating to south Louisiana 's maritime heritage. A research collection of scale drawings, color slides, black and white photographs, old prints and engravings, and audio and video tapes are housed in Ellender Memorial Library and are available for use through the director. The Center commissioned (through the University Research Council) and owns an original collection of pen and ink drawings of Louisiana small watercraft by local artist John Robert Comes. The Center also has original boat building tools and artifacts, as well as a collection of boat models made in cypress by local craftsmen T.J. Arceneaux and C.J. Knobloch. Funding for such projects has come mainly from research grants obtained from the Louisiana Division of the Arts,

the National Endowment for the Arts, and the Jean Lafitte National Hi storical Park. The bulk of the grants have been used to construct the New Orleans sailing lugger, an on-going project. This 19th century sailing craft was rescued from oblivion by the 1984 Louisiana World Exposition. C. Ray Brassieur, an anthropologist and folklorist formerly with the exposition, did considerable research on the lugger and later worked with staff, supervising the early stages of the lugger's construction at the Center. Luggers were once very numerous along the south Louisiana Gulf Coast and survived until the early 1900s. They were primari Iy used in oyster and shrimp harvesting and in the off-season did a lively business hauling farm produce. "Lugger Landing" in New Orleans was a popular off-loading facility for oysters and produce, often with as many as a dozen boats tied up there. The lug sail originated in northern France and the channel side of the British Isles, and presumably came to Louisiana with the French colonists. In the 1880s the luggers were built and manned largely by Italian immigrants who were

active in the oyster and produce business. The dipping lug sail was a rarity in North American waters. It is a powerful sail and had to be quickly dipped when squally weather occurred. A crew of one or two could man the craft easily. These powerful boats were equipped with a centerboard, sai led very fast, and were reputed to be close-winded. Most of the luggers were constructed of cypress and long leaf pine. The deck arrangement was almost the same on all boats, and consisted of a U-shaped cockpit, the forward portion of which was closed off, and had four to six hatchcovers. The aft part had a U-shaped bench and steering well. The bow had a small cabin with at leasttwo berths. The rudder was always hung outboard. At present the Center's new lugger is about 90 percent complete. Several of the boat builders accompany the craft to festivals and discuss its origin and construction. The largest festiva l attended so far has been the Louisiana Jazz and Heritage Festival in New Orleans. The Center for Traditional Louisiana Boat Building will one day become a part of, or merge with, the Wetlands Cultural Center being planned by the Jean Lafitte National Park in the Thibodaux area. The Center, which was a major factor in attracting the Wetlands Cultural Center to Thibodaux, continues to play an important role in the vitality of the area. U.