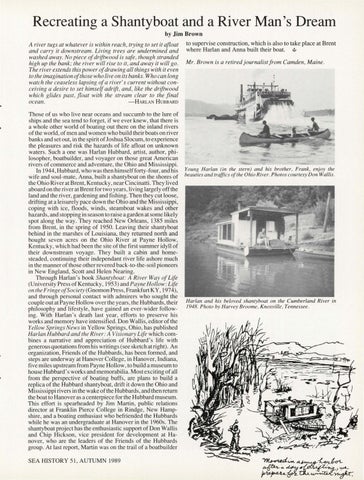 Recreating a Shantyboat and a River Man's Dream by Jim Brown A river tugs at whatever is within reach, trying to set it afloat and carry it downstream. Living trees are undermined and washed away. No piece of driftwood is safe, though stranded high up the bank; the river will rise to it, and away it will go. The river extends this power of drawing all things with it even to the imagination ofthose who live on its banks. Who can long watch the ceaseless lapsing of a river's current without conceiving a desire to set himself adrift, and, like the driftwood which glides past, float with the stream clear to the final ocean. -HARLAN H UBBARD Those of us who live near oceans and succumb to the lure of ships and the sea tend to forget, if we ever knew, that there is a whole other world of boating out there on the inland rivers of the world, of men and women who build their boats on river banks and set out, in the spirit of Joshua Slocum, to experience the pleasures and risk the hazards of life afloat on unknown waters. Such a one was Harlan Hubbard, artist, author, philosopher, boatbuilder, and voyager on those great American rivers of commerce and adventure, the Ohio and Mississippi. In 1944, Hubbard, who was then himself forty-four, and his wife and soul-mate, Anna, built a shanty boat on the shores of the Ohio River at Brent, Kentucky, near Cincinatti. They lived aboard on the riveratBrentfortwo years, living largely off the land and the river, gardening and fishing. Then they cut loose, drifting at a leisurely pace down the Ohio and the Mississippi, coping with ice, floods, winds, steamboat wakes and other hazards, and stopping in season to raise a garden at some likely spot along the way. They reached New Orleans, 1385 miles from Brent, in the spring of 1950. Leaving their shantyboat behind in the marshes of Louisiana, they returned north and bought seven acres on the Ohio River at Payne Hollow, Kentucky, which had been the site of the first summer idyll of their downstream voyage. They built a cabin and homesteaded, continuing their independant river life ashore much in the manner of those other revered back-to-the-soil pioneers in New England, Scott and Helen Nearing. Through Harlan ' s book Shantyboat: A River Way of Life (University Press of Kentucky , 1953) and Payne Hollow: Life on the FringeofSociety(Gnomon Press, Frankfurt KY, 1974), and through personal contact with admirers who sought the couple out at Payne Hollow over the years, the Hubbards, their philosophy and lifestyle, have gained an ever-wider following. With Harlan's death last year, efforts to preserve his works and memory have intensified. Don Wallis, editorofthe Yellow Springs News in Yellow Springs, Ohio, has published Harlan Hubbard and the River: A Visionary Life which combines a narrative and appreciation of Hubbard's life with generous quotations from his writings (see sketch at right). An organization, Friends of the Hubbards, has been formed, and steps are underway at Hanover College, in Hanover, Indiana, five miles upstream from Payne Hollow , to build a museum to house Hubbard 's works and memorabilia. Most exciting of all from the perspective of boating buffs, are plans to build a replica of the Hubbard shantyboat, drift it down the Ohio and Mi ssissippi rivers in the wake of the Hubbards , and then return the boat to Hanover as a centerpiece for the Hubbard museum. This effort is spearheaded by Jim Martin, public relations director at Franklin Pierce College in Rindge, New Hampshire, and a boating enthusiast who befriended the Hubbards while he was an undergraduate at Hanover in the 1960s. The shantyboat project has the enthusiastic support of Don Wallis and Chip Hickson, vice president for development at Hanover, who are the leaders of the Friends of the Hubbards group. At last report, Martin was on the trail of a boatbuilder SEA HISTORY 51, AUTUMN 1989

to supervise construction, which is also to take place at Brent where Harlan and Anna built their boat. .t.

Mr. Brown is a retired journalist from Camden, Maine .

Young Harlan (in the stern) and his brother, Frank , enjoy the beauties and traffics of the Ohio River. Photos courtesy Don Wallis.

Harlan and his beloved shantyboat on the Cumberland River in 1948. Photo by Harvey Broome, Knoxville, Tennessee .