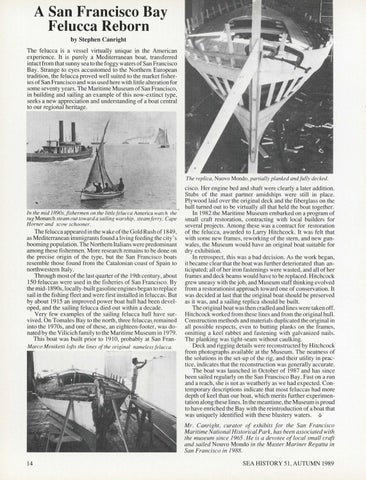 A San Francisco Bay Felucca Reborn by Stephen Canright The felucca is a vessel virtually unique in the American experience. It is purely a Mediterranean boat, transferred intact from that sunny sea to the foggy waters of San Francisco Bay. Strange to eyes accustomed to the Northern European tradition, the felucca proved well suited to the market fisheries of San Francisco and was used here with little alteration for some seventy years. The Maritime Museum of San Francisco, in building and sailing an example of this now-extinct type, seeks a new appreciation and understanding of a boat central to our regional heritage.

In the mid 1890s,fishermen on the littlefelucca America watch the tug Monarch steam out toward a sailing warship, steam ferry , Cape Horner and scow schooner.

The fel ucca appeared in the wake of the Gold Rush of 1849, as Mediterranean immigrants found a living feeding the city&#39;s booming population. The Northern Italians were predominant among these fishermen . More research remains to be done on the precise origin of the type, but the San Francisco boats resemble those found from the Catalonian coast of Spain to northwestern Italy. Through most of the last quarter of the 19th century, about 150 feluccas were used in the fisheries of San Francisco. By the mid-1890s, locally-built gasoline engines began to replace sail in the fishing fleet and were first installed in feluccas. But by about 1915 an improved power boat hull had been developed, and the sailing felucca died out within a decade. Very few examples of the sailing felucca hull have survived. On Tomales Bay to the north, three feluccas_remained into the 1970s, and one of these, an eighteen-footer, was donated by the Vilicich family to the Maritime Museum in 1979. This boat was built prior to 1910, probably at San FranM area M eniketti lofts the lines of the original nameless felucca.

cisco. Her engine bed and shaft were clearly a later addition. Stubs of the mast partner amidships were still in place. Plywood laid over the original deck and the fiberglass on the hull turned out to be virtually all that held the boat together. In 1982 the Maritime Museum embarked on a program of small craft restoration, contracting with local builders for several projects. Among these was a contract for restoration of the felucca, awarded to Larry Hitchcock. It was felt that with some new frames , reworking of the stern, and new gunwales, the Museum would have an original boat suitable for dry exhibition. In retrospect, this was a bad decision. As the work began, it became clear that the boat was further deteriorated than anticipated; all of her iron fastenings were wasted, and all of her frames and deck beams would have to be replaced. Hitchcock grew uneasy with the job, and Museum staff thinking evolved from a restorationist approach toward one of conservation. It was decided at last that the original boat should be preserved as it was, and a sailing replica should be built. The original boat was then cradled and lines were taken off. Hitchcock worked from these lines and from the original hull. Construction methods and materials duplicated the original in all possible respects, even to butting planks on the frames, omitting a keel rabbet and fastening with galvanized nails. The planking was tight-seam without caulking. Deck and rigging details were reconstructed by Hitchcock from photographs available at the Museum. The neatness of the solutions in the set-up of the rig, and their utility in practice, indicates that the reconstruction was generally accurate. The boat was launched in October of 1987 and has since been sailed regularly on the San Francisco Bay. Fast on a run and a reach, she is not as weatherly as we had expected. Contemporary descriptions indicate that most feluccas had more depth of keel than our boat, which merits further experimentation along these lines. In the meantime, the Museum is proud to have enriched the Bay with the reintroduction of a boat that was uniquely identified with these blustery waters. .t

Mr. Canright, curator of exhibits for the San Francisco Maritime National Historical Park, has been associated with the museum since 1965 . He is a devotee of local small craft and sailed Nouvo Mondo in the Master Mariner Regatta in San Francisco in 1988. 14