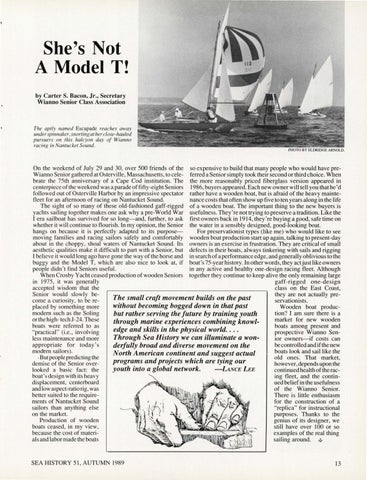 The aptly named Escapade reaches away under spinnaker, snorting at her close-hauled pursuers on this halcyon day of Wianno racing in Nantucket Sound. PHOTO BY ELDRIDG E ARNOLD.

On the weekend of July 29 and 30, over 500 friends of the so expensive to build that many people who would have preWianno Senior gathered at Osterville, Massachusetts, to cele- ferred a Senior simply took their second or third choice. When brate the 75th anniversary of a Cape Cod institution. The the more reasonably priced fiberglass version appeared in centerpiece of the weekend was a parade of fifty-eight Seniors 1986, buyers appeared. Each new owner will tell you that he'd followed out of Osterville Harbor by an impressive spectator rather have a wooden boat, but is afraid of the heavy maintefleet for an afternoon of racing on Nantucket Sound. nance costs that often show up five to ten years along in the life The sight of so many of these old-fashioned gaff-rigged of a wooden boat. The important thing to the new buyers is yachts sai ling together makes one ask why a pre-World War usefulness. They're not trying to preserve a tradition. Like the I era sailboat has survived for so long-and, further, to ask first owners back in 1914, they're buying a good, safe time on whether it will continue to flourish. In my opinion, the Senior the water in a sensibly designed, good-looking boat. hangs on because it is perfectly adapted to its purposeFor preservationist types (like me) who would like to see moving families and racing sailors safely and comfortably wooden boat production start up again, talking to present-day about in the choppy, shoal waters of Nantucket Sound. Its owners is an exercise in frustration. They are critical of small aesthetic qualities make it difficult to part with a Senior, but defects in their boats, always tinkering with sails and rigging I believe it would long ago have gone the way of the horse and in search of a performance edge, and generally oblivious to the buggy and the Model T, which 'are also nice to look at, if boat's 75-year history . In other words, they act just like owners people didn 't find Seniors useful. in any active and healthy one-design racing fleet. Although When Crosby Yacht ceased production of wooden Seniors together they continue to keep alive the only remaining large in 1975, it was generally gaff-rigged one-design accepted wisdom that the class on the East Coast, Senior would slowly bethey are not actually preThe small craft movement builds on the past come a curiosity, to be reservationists. without becoming bogged down in that past placed by something more Wooden boat producmodem such as the Soling tion? I am sure there is a but rather serving the future by training youth or the high- tech J-24. These market for new wooden through marine experiences combining knowlboats were referred to as boats among present and edge and skills in the physical world. ... "practical" (i.e., involving prospective Wianno SenThrough Sea History we can illuminate a wonless maintenance and more ior owners-if costs can appropriate for today' s be controlled and if the new derfully broad and diverse movement on the modem sailors). boats look and sail like the North American continent and suggest actual .But people predicting the old ones. That market, programs and projects which are tying our demise of the Senior overhowever, depends upon the youth into a global network. -LANCE LEE looked a basic fact: the continued health of the racboat 's design with its heavy ing fleet, and the contindisplacement, centerboard ued belief in the usefulness and low aspect-ratio rig, was of the Wianno Senior. better suited to the requireThere is little enthusiasm ments of Nantucket Sound for the construction of a sailors than anything else "replica" for instructional on the market. purposes. Thanks to the Production of wooden genius of its designer, we boats ceased, in my view, still have over 100 or so because the cost of materi examples of the real thing als and labor made the boats sailing around. u,