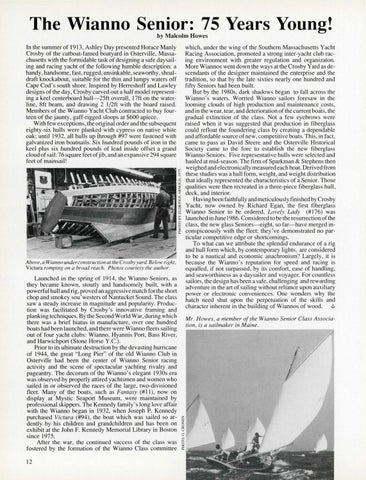 The Wianno Senior: 75 Years Young! by Malcolm Howes In the summer of 1913, Ashley Day presented Horace Manly Crosby of the catboat-famed boatyard in Osterville, Massachusetts with the formidable task of designing a safe daysailing and racing yacht of the following humble description: a handy, handsome, fast, rugged, unsinkable, seaworthy, shoaldraft knockabout, suitable for the thin and lumpy waters off Cape Cod's south shore. Inspired by Herreshoff and Lawley designs of the day, Crosby carved out a half model representing a keel centerboard hull-25ft overall, 17ft on the waterline, 8ft beam, and drawing 2 l/2ft with the board raised. Members of the Wianno Yacht Club contracted to buy fourteen of the jaunty, gaff-rigged sloops at $600 apiece. With few exceptions, the original order and the subsequent eighty-six hull s were planked with cypress on native white oak; until 1932, all hulls up through #97 were fastened with galvanized iron boatnails. Six hundred pounds of iron in the keel plus six hundred pounds of lead inside offset a grand cloud of sai l: 76 square feet of jib, and an expansive 294 square feet of mainsail!

Above, a Wianno under construction at the Crosby yard. Below right, Victura romping on a broad reach . Photos courtesy the author.

which, under the wing of the Southern Massachusetts Yacht Racing Association, promoted a strong inter-yacht club racing environment with greater regulation and organizaton. More Wiannos went down the ways at the Crosby Yard as descendants of the designer maintained the enterprise and the tradition, so that by the late sixties nearly one hundred and fifty Seniors had been built. But by the 1980s, dark shadows began to fall across the Wianno' s waters. Worried Wianno sailors foresaw in the looming clouds of high production and maintenance costs, and in the wear, tear, and deterioration of the current boats, the gradual extinction of the class. Not a few eyebrows were raised when it was suggested that production in fiberglass could refloat the foundering class by creating a dependable and affordable source of new , competitive boats. This, in fact, came to pass as David Steere and the Osterville Historical Society came to the fore to establish the new fiberglass Wianno Seniors. Five representative hulls were selected and hauled at mid-season. The firm of Sparkman & Stephens then weighed and electronically measured each boat. Derived from these studies was a hull form, weight, and weight distribution that ideally represented the characteristics of a Senior. Those qualities were then recreated in a three-piece fiberglass hull , deck, and interior. Having been faithfully and meticulously finished by Crosby Yacht, now owned by Richard Egan, the first fiberglass Wianno Senior to be ordered, Lovely Lady (#176) was launched in Junel 986. Considered to be the resurrection of the class, the new glass Seniors-eight, so far-have merged inconspicuously with the fleet; they 've demonstrated no particular competitive edge or shortcomings. To what can we attribute the splendid endurance of a rig and hull form which, by contemporary lights, are considered to be a nautical and economic anachronism? Largely , it is because the Wianno 's reputation for speed and racing is equalled, if not surpassed, by its comfort, ease of handling, and seaworthiness as a daysailer and voyager. For countless sailors, the design has been a safe, challenging and rewarding adventure in the art of sailing without reliance upon auxiliary power or electronic conveniences. One wonders why the hatch need shut upon the perpetuation of the skills and character inherent in the building of Wiannos of wood . '1i

Launched in the spring of 1914, the Wianno Seniors, as they became known , stoutly and handsomely built, with a powerful hull and rig, proved an aggressive match for the short chop and smokey sou'westers of Nantucket Sound. The class saw a steady increase in magnitude and popularity. Production was faci litated by Crosby's innovative framing and planking techniques. By the Second World War, during which Mr. Howes, a member of the Wianno Senior Class Associathere was a brief hiatus in manufacture, over one hundred tion, is a sailmaker in Maine. boats had been launched, and there were Wianno fleets sailing out of four yacht clubs: Wianno, Hyannis Port, Bass River, and Harwichport (Stone Horse Y.C.). Prior to its ultimate destruction by the devasting hurricane of 1944, the great "Long Pier" of the old Wianno Club in Osterville had been the center of Wianno Senior racing activity and the scene of spectacular yachting rivalry and pageantry. The decorum of the Wianno's elegant 1930s era was observed by properly attired yachtsmen and women who sailed in or observed the races of the large, two-divisioned fleet. Many of the boats, such as Fantasy (#11), now on display at Mystic Seaport Museum, were maintained by professional skippers. The Kennedy family's long love affair with the Wianno began in 1932, when Joseph P. Kennedy purchased Victura (#94), the boat which was sailed so ar- ~ dently by his children and grandchildren and has been on ~ exhibit at the John F. Kennedy Memorial Library in Boston f5 since 1975. d After the war, the continued success of the class was fos tered by the formation of the Wianno Class committee ii: