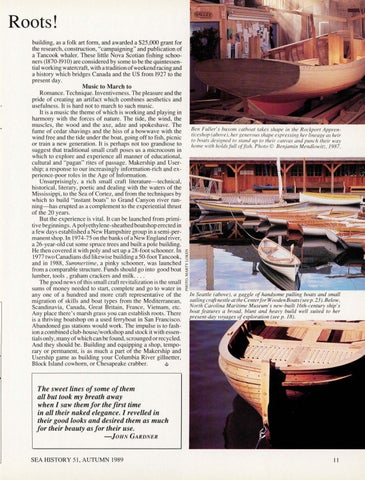 Roots! building, as a folk art form, and awarded a $25,000 grant for the research, construction, "campaigning" and publication of a Tancook whaler. These little Nova Scotian fishing schooners (1870-1910) are considered by some to be the quintessential working watercraft, with a tradition of weekend racing and a history which bridges Canada and the US from 1927 to the present day.

Music to March to Romance. Technique. Inventiveness. The pleasure and the pride of creating an artifact which combines aesthetics and usefulness. It is hard not to march to such music. It is a music the theme of which is working and playing in harmony with the forces of nature. The tide, the wind, the muscles , the wood and the axe, adze and spokeshave. The fume of cedar shavings and the hiss of a bowwave with the wind free and the tide under the boat, going off to fish, picnic or train a new generation. It is perhaps not too grandiose to suggest that traditional small craft poses us a.microcosm in which to explore and experience all manner of educational, cultural and "pagan" rites of passage. Makership and Usership; a response to our increasingly information-rich and experience-poor roles in the Age of Information. Unsurprisingly , a rich small craft literature-technical, historical, literary, poetic and dealing with the waters of the Mississippi , to the Sea of Cortez, and from the techniques by which to build "instant boats" to Grand Canyon river running- has erupted as a complement to the experiential thrust of the 20 years. But the experience is vital. It can be launched from primitive beginnings. A polyethylene-sheathed boatshop erected in a few days established a New Hampshire group in a semi-permanent shop. In 1974-75 on the banks of a New England river, a 26-year-old cut some spruce trees and built a pole building. He then covered it with poly and set up a 28-foot schooner. In 1977 two Canadians did likewise building a 50-foot Tancook, and in 1988, Summertime, a pinky schooner, was launched from a comparable structure. Funds should go into good boat lumber, tools , graham crackers and milk. . . . The good news of thi s small craft revitalization is the small sums of money needed to start, complete and go to water in any one of a hundred and more craft representative of the migration of skills and boat types from the Mediterranean, Scandinavia, Canada, Great Britain, France, Vietnam, etc. Any place there 's marsh grass you can establish roots. There is a thriving boatshop on a used ferryboat in San Francisco. Abandoned gas stations would work. The impulse is to fashion a combined club-house/workshop and stock it with essentials only, many of which can be found , scrounged or recycled. And they should be. Building and equipping a shop, temporary or permanent, is as much a part of the Makership and Usership game as building your Columbia River gillnetter, Block Island cowhom, or Chesapeake crabber. .t

i5: · In Seattle (above), a gaggle of handsome pulling boats and small sailing craft nestle at the Center for Wooden Boats (seep . 23 ). Below, North Carolina Maritime Museum's new-built 16th-century ship's boat features a broad, blunt and heavy build well suited to her present-day voyages of exploration (see P· 18).

The sweet lines of some of them all but took my breath away when I saw them for the first time in all their naked elegance. I revelled in their good looks and desired them as much for their beauty as/or their use. -JOHN GARDNER