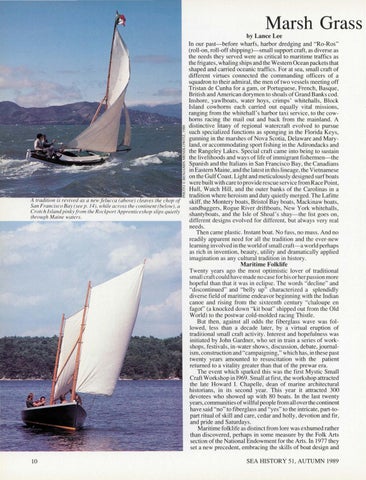 A tradi1ion is revived as a new fe/ucca (above) cleaves the chop of San Francisco Bay (seep. 14), while across the continent (he /ow). a Crotch Island pinky from the Rockport Apprenliceshop slips quie1/y through Maine wa fers.

by Lance Lee In our past-before wharfs, harbor dredging and " Ro-Ros" (roll-on, roll-off shipping)-small support craft, as diverse as the needs they served were as critical to maritime traffics as the frigates, whaling ships and the Western Ocean packets that shaped and carried oceanic traffics. For at sea, small craft of different virtues connected the commanding officers of a squadron to their admiral, the men of two vessels meeting off Tri stan de Cunha for a gam, or Portuguese, French, Basque, British and American dorymen to shoal s of Grand Banks cod. Inshore, yawlboats, water hoys, crimps' whitehalls, Block Island cowhorns each carried out equally vital mi ss ions, ranging from the whitehall's harbor taxi serv ice, to the cowhorns racing the mail out and back from the mainland. A distinctive litany of regional watercraft evolved to pursue such specialized functions as sponging in the Florida Keys, gunning in the marshes of Nova Scotia, Delaware and Maryland , or accommodating sport fishing in the Adirondacks and the Rangeley Lakes. Special craft came into being to sustain the livelihoods and ways of life of immigrant fishermen- the Spanish and the Italians in San Francisco Bay, the Canadians in Eastern Maine, and the latest in this lineage, the Vietnamese on the Gulf Coast. Light and meticulously designed surf boats were built with care to provide rescue serv ice from Race Point, Hull , Watch Hill, and the outer banks of the Carolinas in a tradition where heroism and duty quietly merged. The Lafitte skiff, the Montery boats, Bristol Bay boats, Mackinaw boats, sandbaggers, Rogue River driftboats, New York whitehalls , shantyboats, and the Isle of Shoal 's shay-the list goes on, different designs evolved for different, but always very real needs. Then came plastic. Instant boat. No fu ss, no muss . And no read il y apparent need for all the tradition and the ever-new learn ing involved in the world of small craft-a world perhaps as rich in invention , beauty, utility and dramatically applied imagination as any cultural tradition in hi story.

Maritime Folklife Twenty years ago the most optimi stic lover of traditional small craft could have made no case for hi s or her passion more hopefu l than that it was in ecl ipse. The words "dedine" and "discontinued" and "belly up" characterized a splendidl y diverse field of maritime endeavor beg inning with the Indian canoe and rising from the sixteenth century "chaloupe en fagot" (a knocked down " kit boat" shipped out from the Old World) to the postwar cold-molded racing Thistle. But then , against all odds the fiberglass wave was followed , less than a decade later, by a virtual eruption of traditional small craft activity. Interest and hopefulness was initiated by John Gardner, who set in train a series of workshops, festivals, in-water shows, di scuss ion, debate, journalism, construction and "campai gning," which has, in these past twenty years amounted to resuscitation with the patient returned to a vitality greater than that of the prewar era. The event which sparked this was the first Mystic Small Craft Workshop in 1969. Small at first, the workshop attracted the late Howard I. Chapelle, dean of marine architectural historians, in its second year. This year it attracted 300 devotees who showed up with 80 boats. In the last twenty years, communities of willful people from all over the continent have said " no" to fiberglass and "yes" to the intricate, part-topart ritual of skill and care, cedar and holly, devotion and fir, and pride and Saturdays. Maritime folklife as di stinct from lore was exhumed rather than discovered, perhaps in some measure by the Folk Arts section of the National Endowment for the Arts. In 1977 they set a new precedent, embracing the skill s of boat design and 10