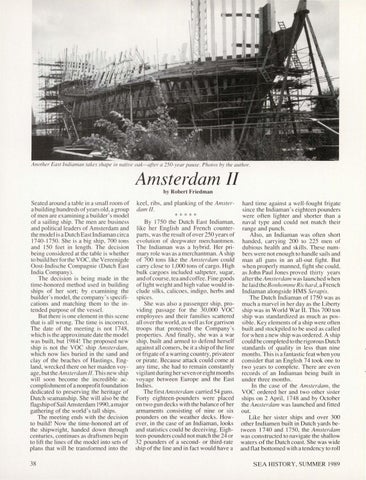 Seated around a table in a small room of a bui Iding hundreds of years old , a group of men are examining a builder&#39;s model of a sai ling ship. The men are business and political leaders of Amsterdam and the model is a Dutch East Indiama n circa 1740-1750. She is a big ship, 700 tons and 150 feet in length. The decision being considered at the table is whether to build herforthe VOC, the Vereen igde Oost-Indi sche Compagn ie (Dutch East India Company). The decision is being made in the time-honored method used in building ships of her sort; by exam ining the builder&#39;s model, the company&#39;s spec ifications and matching them to the intended purpose of the vessel. But there is one element in this scene that is a ll wrong. The time is incorrect. The date of the meeting is not 1748, which is the approximate date the model was built, but 1984! The proposed new ship is not the VOC ship Amsterdam , which now lies buried in the sand and clay of the beaches of Hastings, England, wrecked there on her maiden voyage, but the Amsterdam fl. This new sh ip will soon become the incred ible accompli shment of a nonprofit fo undation dedicated to preserving the heritage of Dutch seamanship. She wi ll also be the flagship of Sail Amsterdam 1990, a major gathering of the world &#39;s tall ships. The meeting ends with the decision to build! Now the time-honored art of the ship wright, handed down through centuries, continues as draftsmen begin to I ift the I in es of the model into sets of plans that will be transformed into the 38

keel, ribs, and planking of the Amsterdam II.

By 1750 the Dutch East lndi aman, like her English and French counterparts , was the result of over 250 years of evo lution of deepwater merchantmen . The Indiaman was a hybrid . Her primary ro le was as a merchantman. A ship of 700 tons like the Amsterdam could carry close to 1,000 tons of cargo. High bulk cargoes included saltpeter, sugar, and of course, tea and coffee. Fine goods of light we ig ht and high va lue wo uld include si lks, calicoes, indigo, herbs and spices. She was also a passenger ship, providing passage for the 30,000 voe employees and their fa milies scattered all over the world, as well as fo r garrison troops that protected the Company&#39;s properties. And finally, she was a war ship, built and ann ed to defend herself against a ll comers, be it a ship of the line or frigate of a warring country, pri vateer or pirate. Because attack could come at any time, she had to remain constantl y vigilant during her seven or eight months voyage between Europe and the East Indies . The firstAmsterdam carried 54 guns. Forty eighteen-pounders were placed on two g un decks with the balance of her armaments cons isting of nine or six pounders on the weather decks. However, in the case of an Indiaman , looks and statistics could be deceiving. Eighteen-pounders could not match the 24 or 32 pounders of a second- or third-rate ship of the line and in fact would have a

hard time aga inst a well-fought frigate since the lndi aman &#39; s eighteen pounders were often lighter and shorter than a naval type and could not match their range and punch . Also, an Indi aman was often short handed , carrying 200 to 225 men of dubious hea lth and sk ill s. These numbers were not enough to handle sail s and man all gun s in an all-out fi ght. But when properly manned , fight she could , as John Paul Jones proved thirty yea rs after the Amsterdam was launched when he laid the Bonhomme Richard, a French India man alongs ide HMS Serapis. The Dutch Indi aman of 1750 was as much a marve l in her day as the Liberty ship was in World War II. This 700 ton ship was standardi zed as much as possible. Key e lements of a ship were often built and stock piled to be used as called for when a new ship was ordered. A ship could be completed to the ri gorous Dutch standards o f quality in less than nine month s. This is a fantastic feat when you consider that an English 74 took one to two years to complete. There are even records of an Indiaman being built in under three month s. In the case of the Amsterdam, the voe ordered her and two other sister ships on 2 April , 1748 and by October the Amsterdam was launched and fitted o ut. Like her sister ships and over 300 other Indiamen built in Dutch yards between 1740 and 1750, the Amsterdam was con s tructed to nav igate the shallow waters of the Dutch coast. She was wide and flat bottomed with a tendency to roll SEA HISTORY, SUMMER 1989