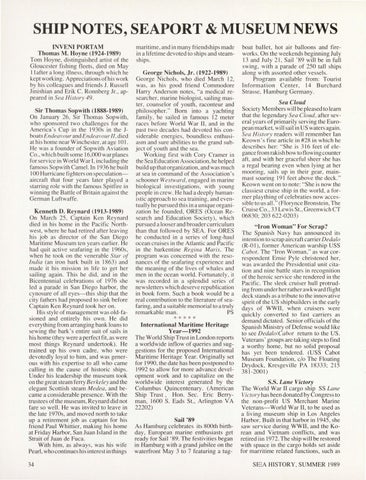 Sir Thomas Sopwith (1888-1989) On January 26, Sir Thomas Sopwith, who sponsored two challenges for the America &#39;s Cup in the 1930s in the Jboats EndeaFour and Endeal&#39;our 11, died at hi s home near Winchester, at age I0 I. He was a founder of Sopwith Aviation Co., which built some 16,000warplanes for service in World War I, including the famous Sopwith Camel. In 1936 he built 100 Hurricane fighters on specu lationaircraft that four years later played a starring role with the famous Spitfire in winning the Battle of Britain against the German Luftwaffe.

maritime, and in many friend ships made in a lifetime devoted to ships and steamships.

George Nichols, Jr. (1922-1989) George Nichols, who died March 12, was, as hi s good friend Commodore Harry Anderson notes, &quot;a medical researcher, marine biologist, sailing master, counselor of youth, raconteur and philosopher.&quot; Born into a yachting family, he sailed in famous 12 meter races before World War II , and in the past two decades had devoted his considerable energies, boundless enthusiasm and sure abilities to the grand subject of youth and the sea. Working first with Cory Cramer in the Sea Education Association, he helped build up that organization, and was much at sea in command of the Association&#39;s schooner Westward, engaged in marine biological investigations , with young people in crew. He had a deeply humanistic approach to sea training, and eventually he pursued this in a unique organization he founded, ORES (Ocean Research and Education Society), which pursued a looser and broader curricu lum than that followed by SEA. For ORES he conducted in a series of long-haul ocean cruises in the Atlantic and Pacific in the barkentine Regina Maris. The program was concerned with the resonances of the seafaring experience and the meaning of the lives of whales and men in the ocean world. Fortunately, it was recorded in a splendid series of newsletters which deserve republication in book form. Such a book would be a real contribution to the literature of seafaring , and a suitable memorial to a truly PS remarkable man .

Kenneth D. Reynard (1913-1989) On March 25 , Captain Ken Reynard died in hi s home in the Pacific Northwest, where he had retired after leaving hi s job as director of the San Diego Maritime Museum ten years earlier. He had quit active seafaring in the 1960s, when he took on the venerable Star of India (an iron bark built in 1863) and made it hi s mission in life to get her sailing again. This he did , and in the Bicentennial celebrations of 1976 she led a parade in San Diego harbor, the cynosure of all eyes-this ship that the city fathers had proposed to sink before Captain Ken Reynard took her on. His style of management was o ld-fasioned and entirely hi s own. He did ***** International Maritime Heritage everything from arranging bank loans to Year-1992 sewing the bark &#39;s entire suit of sails in his home (they were a perfect fit, as were The World Ship Trust in London reports most things Reynard undertook). He a worldwide inflow of queries and sugtrained up his own cadre, who were gestions for the proposed International devotedly loyal to him , and was gener- Maritime Heritage Year. Originally set ous with hi s expertise to all who came for 1990, the date has been postponed to 1992 to allow for more advance develcalling in the cause of historic ships. Under hi s leadership the museum took opment work and to capitalize on the on the great steam ferry Berkeley and the worldwide interest generated by the elegant Scottish steam Medea, and be- Columbus Quincentenary. (American came a considerable presence. With the Ship Trust , Hon. Sec. Eric Berrytrustees of the museum , Reynard did not man , 1600 S. Eads St., Arlington VA fare so well. He was invited to leave in 22202) the late 1970s, and moved north to take Sail &#39;89 up a retirement job as captain for hi s friend Paul Whittier, making his home As Hamburg ce lebrates its 800th birthat Friday Harbor, San Juan Island in the day, European marine enthusiasts get ready for Sail &#39;89. The festivities began Strait of Juan de Fuca. With him, as always, was his wife in Hamburg with a grand jubilee on the Pearl , who continues hi s interest in things waterfront May 3 to 7 featuring a tug34

boat ballet, hot air balloons and fireworks. On the weekends beginning July 13 and July 21, Sail &#39;89 will be in full swing, with a parade of 250 tall ships along with assorted other vessels . Program avai lable from: Tourist Information Center, 14 Burchard Strasse, Hamburg Germany.

Sea Cloud Society Members will be pleased to learn that the legendary Sea Cloud, after several years of primarily serv ing the European market, will sail in US waters aga in. Sea History readers will remember Ian Keown &#39; s fine article in #28 in which he describes her: &quot;She is 3 16 feet of e legance from raki sh bow to flowing counter aft, and with her gracefu l sheer she has a regal bearing even when lying at her mooring, sai ls up in their gear, mainmast soaring 191 feet above the deck. &quot; Keown went on to note: &quot; She is now the classiest cruise ship in the world , a former plaything of celebraties now accessible to us all. &quot; (Florynce Bronstein , The Cruise Co., 33 Lewi s St., Greenwich CT 06830; 203 622-0203)

&quot;Iron Woman&quot; For Scrap? The Spanish Navy has announced its intention to scrap aircraft carrier Dedalo (R-0 I), former American warship USS Cabot. T he &quot;Iron Woman ,&quot; as war correspondent Ernie Pyle christened her, was awarded the Presidential unit c itation and nine battle stars in recogn ition of the heroic service she rendered in the Pacific. The sleek cruiser hull protruding from under her rather awkward flight deck stands as a tribute to the innovative spirit of the US shipbui lders in the early days of WWII, when cruisers were quickly converted to fast carriers as demand dictated. Senior officials of the Spanish Ministry of Defense would like to see Dedalo!Cabot return to the US. Veterans&#39; groups are taking steps to find a worthy home, but no solid proposal has yet been tendered. (USS Cabot Museum Foundation , c/o The Floating Drydock , Kresgeville PA 18333; 215 381-200 1)

S.S. Lane Victory The World War II cargo ship SS Lane Victory has been donated by Congress to the non-profit US Merchant Marine Veterans-World War II , to be used as a li ving museum ship in Los Angeles Harbor. Built in that harbor in 1945 , she saw sef&#39;Vice during WWII, and the Korean amd Vietnam conflicts, and was retired iin 1972. The ship will be restored with spaace in the cargo holds set aside for marritime related functions , such as SEA HISTORY, SUMMER 1989