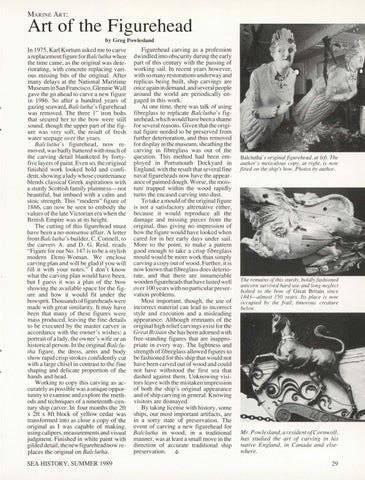 Art of the Figurehead by Greg Powlesland

In 1975 , Karl Kortum asked me to carve a replacement figure for Balclutha when the time came, as the original was deteriorating, with concrete replacing various missing bits of the original. After many delays at the National Maritime Museum in San Francisco, Glennie Wall gave the go ahead to carve a new figure in 1986. So after a hundred years of gazing seaward, Balclutha&#39;s figurehead was removed. The three I&quot; iron bolts that secured her to the bow were sti II sound, though the upper part of the figure was very soft, the result of fresh water seepage over the years. Balclutha &#39; s figurehead, now removed, was badly battered with much of the carving detail blanketed by fortyfive layers of paint. Even so, the original finished work looked bold and confident, showing a lady whose countenance blends class ical Greek aspirations with a sturdy Scottish family plainness-not beautiful, but imbued with a calm and stoic strength. This &quot; modern&quot; figure of 1886, can now be seen to embody the values of the late Victorian era when the British Empire was at its height. The cutting of thi s figurehead must have been a no-nonsense affair. A letter from Balclutha&#39;s builder, C. Connell, to the carvers A. and D. G. Reid, reads &quot;Figure for our No. 147 is to be a stylish modern Demi-Woman. We enclose carving plan and will be glad if you will fi 11 it with your notes. &quot; I don&#39;t know what the carving plan would have been , but I guess it was a plan of the bow showing the available space for the figure and how it would fit under the bowsprit. Thousands of figureheads were made with great similarity. It may have been that many of these figures were mass produced, leaving the fine details to be executed by the master carver in accordance with the owner&#39;s wishes: a portrait of a lady , the owner&#39;s wife or an historica l person. In the original Balclutha figure , the dress, arms and body show rapid crisp strokes confidently cut with a large chisel in contrast to the fine shaping and delicate proportion of the hands and head . Working to copy this carving as accurately as possible was a unique opportunity to examine and explore the methods and techniques of a nineteenth-century ship carver. In four months the 2ft x 2ft x 8ft block of yellow cedar was transformed into as close a copy of the original as I was capable of making, using calipers, measurements and visual judgment. Finished in white paint with gilded detail , thenewfigureheadnow replaces the original on Balclutha . SEA HISTORY, SUMMER 1989

Figurehead carving as a profession dwindled into obscurity during the early part of this century with the passing of working sail. In recent years however, with so many restorations underway and replicas being built, ship carvings are once again in demand, and several people around the world are periodically engaged in this work. At one time, there was talk of using fibreglass to replicate Balclutha&#39;s figurehead, which would have been a shame for several reasons. Given that the original figure needed to be preserved from further deterioration, and thus removed for display in the museum , sheathing the carving in fibreglass was out of the question. This method had been employed in Portsmouth Dockyard in England, with the result that several fine naval figureheads now have the appearance of painted dough . Worse, the moisture trapped within the wood rapidly turns the encased carving into dust. To take a mould of the original figure is not a satisfactory alternative either, because it would reproduce all the damage and missing pieces from the original, thus giving no impression of how the figure would have looked when cared for in her early days under sail. More to the point, to make a pattern good enough to take a crisp fibreglass mould would be more work than simply carving a copy out of wood. Further, it is now known that fibreglass does deteriorate, and that there are innumerable wooden figureheads that have lasted well over 100 years with no particular preservation problems. Most important, though , the use of incorrect material can lead to incorrect style and execution and a misleading appearance. Although remnants of the original high relief carvings exist for the Great Britain she has been adorned with free-standing figures that are inappropriate in every way. The lightness and strength of fibreglass allowed figures to be fashioned for this ship that would not have been carved out of wood and could not have withstood the first sea that dashed against them. Unknowing visitors leave with the mi staken impression of both .the ship&#39;s original appearance and of ship carving in general. Knowing visitors are dismayed. By taking license with history , some ships, our most important artifacts, are in a sorry state of preservation. The event of carving a new figurehead for Balclutha in wood , in a traditional manner, was at least a small move in the direction of accurate traditional ship preservation. w

Balclutha&#39; s original figurehead, at lefr. The aurhor&#39; s mericulous copy , at right, is now fitted on the ship&#39;s bow. Photos by author.

The remains of this sturdy, boldly fashioned unicom survived hard use and long neglect bolted to rhe bow of Great Britain since 1843--almost 150 years. !rs place is now occupied by rhe frail, timorous creature below.

Mr. Powles/and, a resident ofCornwall , has studied the art of carving in his native England, in Canada and elsewhere. 29