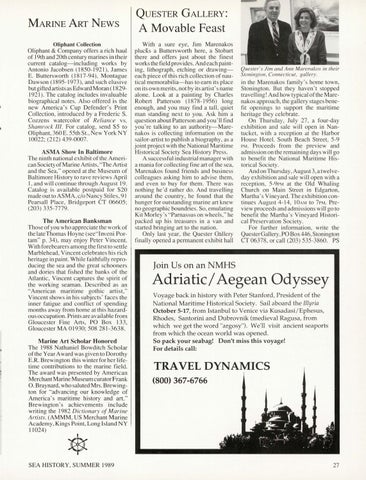 ASMA Show In Baltimore The ninth national exhibit of the American Society of Marine Artists, &quot;The Artist and the Sea,&quot; opened at the Museum of Baltimore History to rave reviews April I , and will continue through August 19. Catalog is avai lable postpaid for $20 made out to ASMA, c/o Nancy Stiles, 91 Pearsall Place, Bridgeport CT 06605 ; (203) 335-7779.

The American Banksman Those of you who appreciate the work of the late Thomas Hoyne (see&quot;lnveni Portam&quot; p. 34) , may enjoy Peter Vince nt. With forebearers among the first to settle Marblehead, Vincent celebrates his rich heritage in paint. While faithfully reproducing the sea and the great schooners and dories that fished the banks of the Atlantic, Vincent captures the spirit of the working seaman. Described as an &quot;American maritime gothic arti s t,&quot; Vincent shows in his subjects&#39; faces the inner fatigue and conflict of spending months away from home at this hazardous occupation. Prints are available from Gloucester Fine Arts, PO Box 133, Gloucester MA 01930; 508 28 1-3638.

A Movable Feast With a sure eye, Jim Marenakos plucRs a Buttersworth here, a Stobart there and offers just about the finest works the field provides . And each painting, lithograph, etching or drawingeach piece of this rich collection of nautical memorabilia-has to earn its place on its own merits, not by its artist&#39;s name alone. Look at a painting by Charles Robert Patterson ( 1878-1956) long enough, and you may find a tall , quiet man standing next to you. Ask him a question about Patterson and you &#39; II find you&#39;re talking to an authority-Marenakos is collecting information on the sailor-artist to publish a biography , as a joint project with the National Maritime Hi storical Society Sea History Press . A successful industrial manager with a mania for col lecting fine art of the sea, Marenakos found friend s and business colleagues asking him to advise them , and even to buy for them. There was nothing he &#39;d rather do. And travelling around the country, he found that the hunger for outstanding marine art knew no geographic boundries. So, emulating Kit Morley &#39;s &quot; Parnass us on wheels,&quot; he packed up his treasures in a van and started bringing art to the nation . Only last year, the Quester Gallery finally opened a permanent exhibit hall

Quester&#39;s Jim and Ann Marenakos in their Stonington, Connecticut , gallery. in the Marenakos family&#39;s home town, Stonington. But they haven&#39;t stopped travelling! And how typical of the Marenakos approach, the gallery stages benefit openings to support the maritime heritage they celebrate. On Thursday, July 27, a four-day exhibition and sa le will open in Nantucket, with a reception at the Harbor House Hotel , South Beach Street, 5-9 PM. Proceeds from the preview and admission on the remaining days will go to benefit the National Maritime Historical Society. And on Thursday, August 3, a twelveday exhibition and sale will open with a reception, 5-9PM at the Old Whaling Church on Main Street in Edgarton , Martha &#39; s Vineyard. The exhibition continues August 4-14, I 0AM to 7PM. Preview proceeds and admissions will go to benefit the Martha &#39;s Vineyard Historical Preservation Society. For further information , write the Quester Gallery, PO Box 446, Stonington CT 06378, or call (203) 535-3860. PS

Join Us on an NMHS

Adriatic/ Aegean Odyssey Voyage back in history with Peter Stanford, President of the National Maritime Historical Society. Sail aboard the Illyria October 5-17, from Istanbul to Venice via Kusadasi/Ephesus, Rhodes, Santorini and Dubrovnik (medieval Ragusa, from which we get the word &quot;argosy&quot;). We&#39;ll visit ancient seaports from which the ocean world was opened. So pack your seabag! Don&#39;t miss this voyage! For details call: