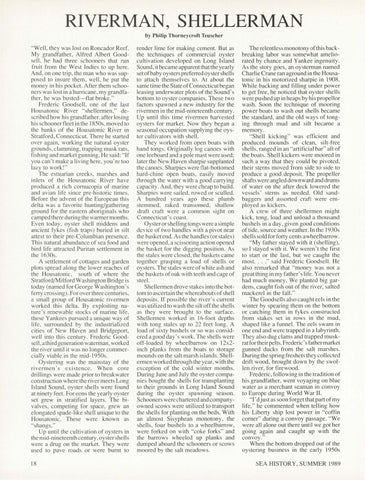 RIVERMAN, SHELLERMAN by Philip Thorneycroft Teuscher &quot;Well, they was lost on Roncador Reef. My grandfather, Alfred Albert Goodsell, he had three schooners that run fruit from the West Indies to up here. And, on one trip, the man who was supposed to insure them, well, he put the money in his pocket. After them schooners was lost in a hurricane, my grandfather, he was busted-flat broke.&quot; Frederic Goodsell, one of the last Housatonic River &quot;shellermen,&quot; described how his grandfather, after losing his schooner fleet in the 1850s, moved to the banks of the Housatonic River in Stratford, Connecticut. There he started over again, working the natural oyster grounds, clamming, trapping musk rats, fishing and market gunning. He said: &quot;If you can&#39;t make a living here, you&#39;re too lazy to work!&quot; The estuarian creeks, marshes and inlets of the Housatonic River have produced a rich cornucopia of marine and avian life since pre-historic times. Before the advent of the European this delta was a favorite hunting/gathering ground for the eastern aboriginals who camped there during the wanner months. Even today, oyster shell middens and ancient fykes (fish traps) buried in silt attest to their pre-Columbian presence. This natural abundance of sea food and bird life attracted Puritan settlement in the 1630s. A settlement of cottages and garden plots spread along the lower reaches of the Housatonic, south of where the Stratford/Milford Washington Bridge is today (named for George Washington&#39;s ferry crossing). For over three centuries, a small group of Housatonic rivennen worked this delta. By exploiting nature&#39;s renewable stocks of marine life, these Yankees pursued a unique way of life, surrounded by the industrialized cities of New Haven and Bridgeport, well into this century. Frederic Goodsel I, a third generation waterman, worked the river until it was no longer commercially viable in the mid- l 950s. Oystering was the mainstay of the rivermen&#39;s existence. When core drillings were made prior to breakwater construction where the river meets Long Island Sound, oyster shells were found at ninety feet. For eons the yearly oyster set grew in stratified layers. The bivalves, competing for space, grew an elongated spade-like shell unique to the Housatonic. These were known as &quot;shangs.&quot; Up until the cultivation of oysters in the mid-nineteenth century, oyster shells were a drug on the market. They were used to pave roads or were burnt to 18

render lime for making cement. But as the techniques of commerc ial oyster cu ltivation developed on Long Island Sound, it became apparent that the yearly set of baby oysters preferred oyster she Ils to attach themselves to. At about the same time the State of Connecticut began leasing underwater plots of the Sound&#39;s bottom to oyster companies. These two factors spawned a new industry for the rivermen in the mid-nineteenth century . Up until this time rivermen harvested oysters for market. Now they began a seasonal occupation supplyi ng the oyster cultivators with shell. They worked from open boats with hand tongs. Originally log canoes with one leeboard and a pole mast were used; later the New Haven sharp ie supplanted the canoes. Sharpies were flat-bottomed hard-chine open boats, easi ly moved through the water with a good carry ing capacity. And, they were cheap to build. Sharpies were sailed, rowed or scu lled. A hundred years ago these plumb stemmed, raked transomed, shallow draft craft were a common sight on Connecticut&#39;s coast. Oyster or shelling tongs were a simple device of two hand les with a pivot near the basket end. As the handles (or stales) were opened, a scissoring action opened the basket for the digging position. As the stales were closed, the baskets came together grasping a load of shell s or oysters. The stales were of white ash and the baskets of oak with teeth and cage of steel. She llermen drove stakes into the bottom to ascertain the whereabouts of she I1 deposits. If possible the river&#39;s current was utilized to wash the si lt off the shells as they were brought to the surface. Shellermen worked in 16-foot depths with tong stales up to 22 feet long . A load of sixty bushels or so was considered a good day&#39;s work. The shells were off-loaded by wheelbarrow on l 2x2inch planks from the boats to storage mounds on the salt marsh islands. Shellermen worked through the year, with the exception of the cold winter months. During June and July the oyster companies bought the shel ls for transplanting to their grounds in Long Island Sound during the oyster spawning season. Schooners were chartered and companyowned scows were utilized to transport the shells for planting on the beds. With an almost Sisyphean monotony, the she ll s, four bushels to a wheelbarrow, were forked on with &quot;coke forks&quot; and the barrows wheeled up planks and dumped aboard the schooners or scows moored by the sa lt meadows.

The relentless monotony of this backbreaking labor was somewhat ameliorated by chance and Yankee ingenuity. As the story goes, an oystennan named Charlie Crane ran aground in the Hou satonic in hi s motorized sharpie in 1908. While backing and filling under power to get free, he noticed that oyster shell s were pushed up in heaps by his propellor wash. Soon the technique of mooring power boats to wash out shells became the standard , and the old ways of tonging through mud and si lt became a memory. &quot;She ll kicking&quot; was efficient and produced mounds of clean, silt-free shells , ranged in an &quot;artificial bar&quot; aft of the boats. Shell kickers were moored in such a way that they could be pivoted , their sterns moved from side to side to produce a good deposit. The propeller shafts were angled downward and drums of water on the afte r deck lowered the vessels&#39; stern s as needed. Old sandbaggers and assorted craft were employed as kickers. A crew of three shellennen might kick, tong, load and unload a thou sand bushels in a day, given good conditions of tide, source and weather. In the 1930s shell s so ld for forty cents a wheelbarrow . &quot;My father stayed with it (shelling), so I stayed with it. We weren&#39;t the first to start or the last, but we caught the most. ... &quot; said Frederic Goodsell. He also remarked that &quot; money was not a great thing in my father&#39;s life. You never had much money. We planted big gardens, caught fish out of the river, sa lted mackerel in the fall.&quot; The Goodsells also caught eels in the winter by spearing them on the bottom or catching them in fykes constructed from stakes set in rows in the mud , shaped like a funnel. The eels swam in one end and were trapped in a labyrinth. They a lso dug clams and trapped muskrat for their pelts. Frederic&#39;s father market gunned ducks from the salt marshes. During the spring freshets they collected drift wood, brought down by the swollen river, for firewood. Frederic, following in the tradition of hi s grandfather, went voyaging on blue water as a merchant seaman in convoy to Europe during World War II. &quot;I &#39;dj ust as soon forget that part of my life,&quot; he commented when telling how hi s Liberty ship lost power in &quot;coffin corner&quot; during a convoy passage. &quot; We were a ll alone out there until we got her go ing again and caught up with the convoy.&quot; When the bottom dropped out of the oystering business in the early 1950s SEA HISTORY, SUMMER 1989