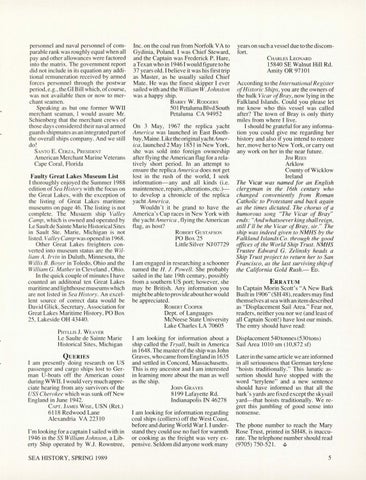 personnel and naval personnel of comparable rank was roughly equal when all pay and other all owances were facto red into the matrix . The government report did not include in its equati on any additional remuneration received by armed forces personne l th ro ugh the postwar period, e.g., the GI Bill wh ich, of course, was not available then or now to merchant seamen. Speaking as but one former WWII merchant seaman , J would ass ure Mr. Schienberg that the merchant crews of those days considered their nava l armed guards shipmates as an integrated part of the overall ships company. And we still do! SANTO E. CERZA, PRESIDE T American Merchant Marine Veterans Cape Cora l, Florida

Faulty Great Lakes Museum List I thoroughly enjoyed the Summer 1988 edition of Sea History with the foc us on the Great Lakes, with the exception of the listing of Great Lakes maritime museum s on page 46. The li sting is not complete. The Musuem ship Va lley Camp, which is owned and operated by Le Sault de Sainte Marie Hi storical Sites in Sault Ste. Marie, Michigan is not li sted. ValleyCampwasopenedin 1968. Other Great Lakes freighters converted into museum status are the William A. Irvin in Duluth , Minnesota, the Willis B. Boyer in Toledo, Ohio and the William G. Mather in Cleveland , Ohio. In the quick couple of minutes I have counted an add itonal ten Great Lakes maritimeand lighthouse museums which are not li sted in Sea History. An excellent source of correct data wo uld be David Glick , Secretary, Association fo r Great Lakes Maritime Hi story, PO Box 25 , Lakeside OH 43440. PHYLLIS J . WEAVER Le Saulte de Sainte Marie Hi storical Sites, Michigan Q UERIE S

I am presentl y doing research on US passenger and cargo ships lost to German U-boats off the Ameri can coast during WWII. I would ve ry much appreciate hearing from any surv ivors of the USS Cherokee which was sunk off New England in June 1942. CAPT. JAMES W1sE, USN (Ret.) 6 11 8 Redwood Lane Alexandria VA 223 10 I&#39;m looking for a captai n I sailed with in 1946 in the SS William John son, a Liberty Ship operated by W.J. Rowntree, SEA HISTORY , SPRING 1989

Inc. on the coal run from Norfolk VA to Gydinia, Poland. I was Chief Steward, and the Captain was Frederick P. Hare, a Texan who in 1946 I would figure to be 37 years old. I believe it was hi s first trip as Master, as he usuall y sailed Chief Mate. He was the finest skipper I ever sailed with and the William W. Johnston was a happy ship. BARRY W. RODGERS 501 Petaluma Bl vdSouth Petaluma CA 94952 On 3 May, 1967 the replica yacht

America was launched in East Boothbay, Maine. Like the original yachtAmerica, launched 2 May 185 1 in New York, she was sold into foreign ownership after flying the American flag for a relatively short period. In an attempt to ensure the replica America does not get lost in the rush of the world , I seek information-any and all kinds (i.e. maintenence, repairs, alterati ons, etc.)to develop a chronicle of the replica yacht America. Wouldn &#39; t it be grand to have the America&#39;s C up races in New York with the yacht America, flying the American flag, as host? ROBERT G USTAFSON PO Box 25 LittleSilver NJ07729 I am engaged in researching a schooner named the H. J. Powell. S he probabl y sai led in the late 19th century, possi bly from a southern US port; however, she may be British. Any info rmati on you might be able to provide abo ut her would be appreciated . ROBERT COOPER Dept. of Languages McNeese State University Lake Charl es LA 70605 I am looking for info rmation about a ship called the Tryall, built in America in 1648. The masterofthe ship was John Graves, who came from England in 1635 and settled in Concord, Massac husetts. Thi s is my ancestor and I am interested in learning more about the man as well as the ship. JOHN GRAVES 8 199 Lafayette Rd . Indi anapol is IN 46278 I am looking for information regarding coal ships (colliers) off the West Coast, before and during World War I. I understand they could use no fuel for warmth or cooking as the freight was very expensive. Seldom did anyo ne work man y

years on such a vessel due to the discomfort. CHARLES LEONARD 15840 SE Walnut Hill Rd . Amity OR 97101 According to the International Register of Historic Ships, you are the owners of the hulk Vicar of Bray, now lying in the Falkland Islands. Could you please let me know who this vessel was called after? The town of Bray is only thirty miles from where I live. I should be grateful for any information yo u could g ive me regarding her hi story and also if yo u intend to restore her, move her to New York, or carry out any work on her in the near future . J1M R EES Arklow County of Wicklow Ireland The Vicar was named for an English

clergyman in the 16th century who changed conveniently fr om Roman Catholic to Protestant and back again as the times dictated. The chorus of a humorous song &#39;&#39;The Vicar of Bray&quot; ends: &quot;And whatsoever king shall reign, still I&#39;ll be the Vicar of Bray, sir. &quot; The ship was indeed given to NMHS by the Falkland Islands Co. through the good offices of the World Ship Trust. NMHS Trustee Edward G. Zelinsky heads a Ship Trust project to return her to San Francisco , as the last surviving ship of the California Gold Rush.- ED. ERRATUM

In Captain Morin Scott&#39;s &quot; A New Bark Built in 1906&quot; (SH 48), readers may find themselves at sea with an item described as &quot; Displacement Sail Area. &quot; Fear not, readers, ne ither you nor we (and least of all Captain Scott!) have lost our minds. The entry sho uld have read: Displacement 540 tonnes (530 tons) Sail Area 10 I 0 sm ( 10,872 sf) Later in the same article we are informed in all seriousness that German terylene &quot; hoists traditionally .&quot; This lunati c assertion should have stopped with the word &quot; terylene&quot; and a new sentence should have informed us that all the bark &#39;s yards are fixed except the skysail yard-that hoi sts traditionall y. We regret thi s jumbling of good sense into nonsense. The phone number to reach the Mary Rose Trust, printed in SH48, is inaccurate . The tele phone number should read (9705) 750-52 1. J,