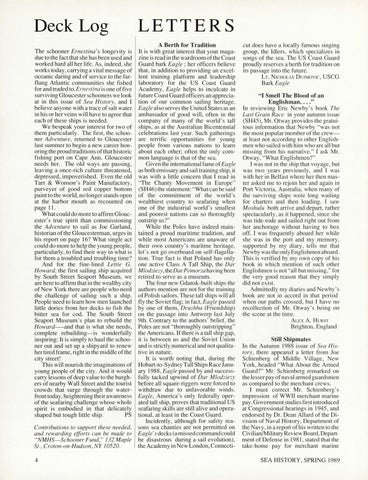 Deck Log The schooner Ernestina&#39;s longev ity is due to the fact that she has been used and worked hard all her life. As, indeed, she works today , carrying a vital message of oceanic daring and of serv ice to the farflung Atlantic communities she fi shed fo r and traded to.Ernestina is one of five surviving Gloucester schooners we look at in this iss ue of Sea History, and I believe anyo ne with a trace of salt water in his or her veins will have to ag ree that each of these ships is needed. We bespeak yo ur interest for two of them particularly. The first, the schooner Adventure, returned to Gloucester last summer to begin a new career honoring the proud traditions of that hi storic fi shing port on Cape Ann. Gloucester needs her. The old ways are pass ing, leav ing a once-rich culture threatened , depressed, impoveri shed. Even the old Tarr &amp; Wonson &#39;s Paint Manufactory, purveyer of good red copper bottom pai nt to the world, no longer stands open at the harbor mouth as recounted on page 11. What could do more to affirm Gloucester &#39;s true spirit than commi ss ioning the Adventure to sail as Joe Garland, hi storian of the Gloucesterman, urges in hi s report on page 16? What single act could do more to help the young people, particularly, to find their way in what is for them a troubled and troubling time? And for the fine-lined Lettie G. Howard, the first sailing ship acquired by South Street Seaport Mu seum , we are here to affirm that in the wealthy city of New York there are people who need the challenge of sailing such a ship. Peopl e need to learn how men launched little dories from her decks to fish the bitter sea for cod. The South Street Sea port Museum &#39;s pl an to rebuild the Howard-and that is what she needs, complete rebuilding-is wonderfull y inspiring: It is simply to ha ul the schooner out and set up a shipyard to renew her tired frame , ri ght in the middle of the city street! Thi s will nouri sh the im aginations of young people of the city. And it would carry lessons of deep value to the burghers of nearby Wall Street and the touri st crowds that surge through the wate rfront today, heightening their awareness of the seafaring challenge whose whole spirit is embodied in that delicate ly shaped but tough little ship. PS

Contributions to support these needed, and rewarding efforts can be made to &quot;NM HS-Schooner Fund, &quot; 132 Maple St., Croton-on-Hudson, NY 10520. 4

LETTERS A Berth for Tradition It is with great interest that yo ur magazine is read in the wardroom of the Coast Guard bark Eagle ; her officers believe that, in addition to providing an excellent training platform and leadership laboratory for the US Coast Guard Academy, Eagle helps to inculcate in future Coast Guard officers an appreciation of our common sailing heritage. Eagle also serves the U nited States as an am bassador of good wi ll , often in the company of many of the world &#39;s tall ships, as at the Australi an Bicentennial celebrations last year. S uch gatherings are terrific opportunities for young people from various nations to learn about each other; often the only common language is that of the sea. Given the international fame of Eagle as both em issary and sail training ship, it was with a littl e concern that I read in &quot;The Chanty Movement in Europe&quot; (SH46) the statement: &quot; What can be said of the commitment of the world &#39; s wealthiest country to seafaring when one of the industrial world &#39;s smallest and poorest nations can so thoroughl y outstrip us?&quot; While the Poles have indeed maintained a proud maritime tradition , and while most Americans are unaware of their own country&#39;s maritme heritage, let &#39;s not go overboard on self-flagellation . True fact is that Poland has onl y one active Class A Tall Ship, the Dar Mlodziezy, the Dar Pomorza having been retired to serve as a museum . The four new Gdan sk-built ships the authors mention are not fo r the training of Polish sailors. These tall ships will all fl y the Soviet fl ag; in fact, Eagle passed by one of them , Druzhba (Friendship) on the passage into An twerp last Jul y 9th . Contrary to the authors&#39; belief, the Poles are not &quot; thoroughl y outstripping&quot; the American s. If there is a tall ship gap, it is between us and the Soviet Union and is strictly numerical and not qualitati ve in nature. It is wo rth noting that, during the Hobart-to-Sydney Tall Ships Race January 1988, Eagle passed by and successfull y tacked upwind of Dar Mlodziezy before all square- riggers were forced to withdraw due to unfavorab le winds. Eagle, America &#39;s onl y federa ll y operated tall ship, proves that traditional US seafaring skills are still ali ve and operational, at least in the Coast G uard . Incidentl y, although for safety reasons sea chanties are not permitted on Eagle&#39;s decks (a missed command could be disastrous during a sail evoluti on), the Academy in New London , Connecti-

cut does have a locall y famous singing gro up , the Idlers, which speciali zes in songs of the sea. The US Coast Guard proudly reserves a berth for tradition on its passage into the future . LT. N ICHOLAS D UJMOVIC, USCG Bark Eagle

&quot;I Smell The Blood of an Englishman . .. .&quot; In rev iew ing Eric Newby&#39;s book The Last Grain Race in yo ur autumn issue (SH45), Mr. Otway provides the gratuitous information that Newby &quot; was not the most popul ar member of the crewat least not according to other Engli shmen who sail ed with him who are all but mi ss ing from hi s narrative.&quot; I ask Mr. Otway, &quot;What Englishmen?&quot; I was not in the ship that voyage, but was two years prev iously, and I was with her in Belfast where he r then master asked me to rejoin her and again in Port Victoria, Australia, when man y of the surviv ing ships were long waiti ng for charters and then loading. I saw Moshulu both arrive and depart, rather spectacul arly, as it happened, since she was tide-rode and sailed right o ut from her anchorage withou t having to box off. I was freq uentl y aboard her whil e she was in the port and my memory , supported by my diary, tells me that Newby was the on ly Engli shmen aboard. Thi s is verified by my own copy of hi s book in which mention of such other Engli shmen is not &quot;all but mi ss ing,&quot; for the very good reason that they simpl y did not ex ist. Adm ittedly my diaries and Newby&#39;s book are not in accord in that period when our paths crossed, but I have no reco ll ection of Mr. Otway&#39;s be ing on the scene at the time. ALEX A. HURST Brighton, England Still Shipmates In the Autumn 1988 issue of Sea History, there appeared a letter from Joe Schienberg of Middle Village, New York , headed &quot; What About the Armed Guard ?&quot; Mr. Sch ienberg remarked on the lesser pay of naval armed guardsmen as compared to the merchant crews. I mu st correct Mr. Schienberg&#39;s impress ion of WWII merchant marine pay. Government studies first introduced at Congress ional hearings in 1945 , and endorsed by Dr. Dean All ard of the D ivision of Naval Hi story , Department of the Navy, in a re port of hi s written to the Civili an/M ilitary Rev iew Board, Department of Defense in 198 1, stated that the take-home pay for merchant marine SEA HISTORY, SPRING 1989