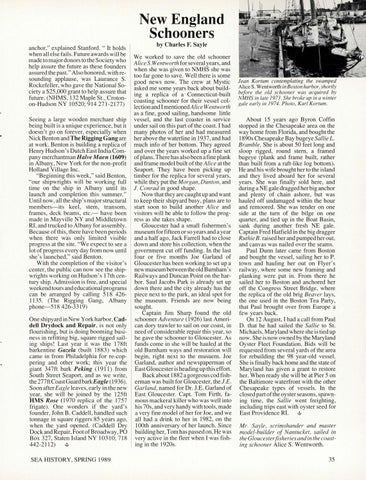 New England Schooners anchor,&quot; explained Stanford. &quot; It holds when all else fails . Future awards will be made to major donors to the Society who help assure the future as these founders assured the past.&quot; Also honored, with resounding applause, was Laurance S. Rockefeller, who gave the National Society a $25,000 grant to help assure that future. (NHMS , 132 Maple St., Crotonon-Hudson NY 10520; 914 271-2177) Seeing a large wooden merchant ship being built is a unique experience, but it doesn &#39; t go on forever, especially when Nick Benton and The Rigging Gang are at work. Benton is building a replica of Henry Hudson&#39;s Dutch East India Company merchantman Halve Maen (1609) in Albany, New York for the non-profit Holland Village Inc. &quot;Beginning this week,&quot; said Benton, &quot;our shipwrights will be working full time on the ship in Albany until its launch and completion this summer.&quot; Until now, all the ship&#39;s major structural members-its keel, stem , transom , frames, deck beams, etc.- have been made in Mayville NY and Middletown RI, and trucked to Albany for assembly. Because of this, there have been periods when there was only limited visible progress at the site. &quot;We expect to see a lot of progress every day from now until she&#39;s launched,&quot; said Benton. With the completion of the visitor&#39;s center, the public can now see the shipwrights working on Hudson&#39;s 17th century ship. Admission is free, and special weekend tours and educational programs can be arranged by calling 518 4261135. (The Rigging Gang, Albany phone-518 426-3319) One shipyard in New York harbor, Caddell Drydock and Repair, is not only flourishing , but is doing booming business in refitting big, square rigged sailing ships! Last year it was the l 78ft barkentine Gaze/a (built 1883) which came in from Philadelphia for re-coppering and other work; this year the giant 34 7ft bark Peking (1911) from South Street Seaport, and as we write, the 277ft Coast Guard bark Eagle (1936) . Soon after Eagle leaves, early in the new year, she will be joined by the l 25ft HMS Rose (1970 replica of the 1757 frigate) . One wonders if the yard &#39; s founder, John B. Caddell , handled such tonnage in square riggers 85 years ago , when the yard opened. (Caddell Dry Dock and Repair, Foot ofBroadway, PO Box 327, Staten Island NY 1031 O; 718 w 442-2112) SEA HISTORY , SPRING 1989

by Charles F. Sayle We worked to save the old schooner AliceS.Wentworthforseveral years, and when she was given to NMHS she was too far gone to save. Well there is some good news now. The crew at Mystic asked me some years back about building a replica of a Connecticut-built coasting schooner for their vessel collection and I mentioned A lice Wentworth as a fine , good sailing, handsome little vessel, and the last coaster in service under sail on this part of the coast. I had many photos of her and had measured her above the waterline in 1937, and had much info of her bottom. They agreed and over the years worked up a fine set of plans. There has also been a fine plank and frame model built of the Alice at the Seaport. They have been picking up timber for the replica for several years, while they put the Morgan, Dunton, and J. Conrad in good shape. Now that they are caught up and want to keep their shipyard busy, plans are to start soon to build another Alice and visitors will be able to follow the progress as she takes shape. Gloucester had a small fishermen &#39; s museum for fifteen or so years and a year and a half ago, Jack Farrell had to close down and store his collection, when the government cut off funding. In the last four or five months Joe Garland of Gloucester has been working to set up a new museum between the old Burnham &#39; s Railways and Duncan Point on the harbor. Saul Jacobs Park is already set up down there and the city already has the piece next to the park, an ideal spot for the museum . Friends are now being sought. Captain Jim Sharp found the old schooner Adventure (1926) last American dory trawler to sail on our coast, in need of considerable repair this year, so he gave the schooner to Gloucester. As funds come in she will be hauled at the old Burnham ways and restoration will begin , right next to the musuem. Joe Garland , author and newspaperman of East Gloucester is heading up this effort. Back about 1882 a gorgeous cod fisherman was built for Gloucester, the J.E. Garland, named for Dr. J.E. Garland of East Gloucester. Capt. Tom Firth, famous mackeral killer who was well into his 70s, and very handy with tools , made a very fine model of her for Joe, and we all had a drink to her in 1982, on the lOOth anniversary of her launch. Since building her, Tom has passed on. He was very active in the fleet when I was fishing in the 1920s.

Jean Kortum contemplating the swamped Alice S. Wentworth in Boston harbor, shortly before the old schooner was acquired by NMHS in late 1973. She broke up in a winter gale early in 1974 . Photo , Karl Kortum .

About 15 years ago Byron Coffin stopped in the Chesapeake area on the way home from Florida, and bought the 1890s Chesapeake Bay bugeye Sallie L. Bramble. She is about 50 feet long and sloop rigged, round stern , a framed bugeye (plank and frame built, rather than built from a raft-like log bottom). He and his wife brought her to the island and they lived aboard her for several years. She was finally sold here, and during a NE gale dragged her big anchor and plenty of chain ashore, but was hauled off undamaged within the hour and remoored. She was tender on one side at the turn of the bilge on one quarter, and tied up in the Boat Basin, sank during another fresh NE gale. Captain Fred Hatfield in the big dragger Ruthie B. raised her and pumped her out, and canvas was nailed over the seams. Paul Dunn later came from Boston and bought the vessel , sailing her to P. town and hauling her out on Flyer&#39; s railway, where some new framing and planking were put in . From there he sailed her to Boston and anchored her off the Congress Street Bridge, where the replica of the old brig Beaver lays, the one used in the Boston Tea Party, that Paul brought over from Europe a few years back. On 12 August, I had a call from Paul D. that he had sailed the Sallie to St. Michaels, Maryland where she is tied up now . She is now owned by the Maryland Oyster Fleet Foundation. Bids will be requested from several yards of the area for rebuilding the 98 year-old vessel. She is finally back home and the state of Maryland has given a grant to restore her. When ready she will be at Pier 5 on the Baltimore waterfront with the other Chesapeake types of vessels. In the closed part of the oyster seasons, spawning time, the Sallie went freighting , including trips east with oyster seed for .t East Providence RI.

Mr. Sayle, scrimshander and master model-builder of Nantucket, sailed in the Gloucesterfisheries and in the coasting schooner Alice S. Wentworth. 35