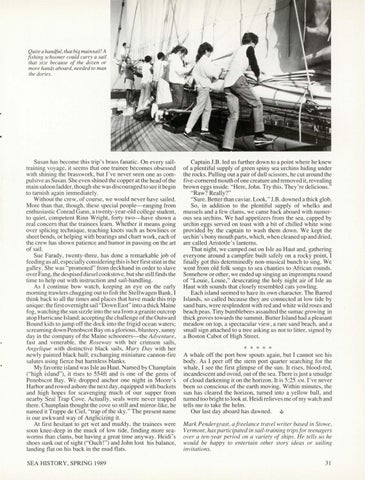 Quite a handful, that big mainsail! A fishing schooner could carry a sail that size because of the dozen or more hands aboard, needed to man the dories.

Susan has become this trip&#39;s brass fanatic. On every sailtraining voyage, it seems that one trainee becomes obsessed with shining the brasswork, but I&#39;ve never seen one as compulsive as Susan. She even shined the copper at the head of the main saloon ladder, though she was discouraged to see it begin to tarni sh again immediately. Without the crew, of course, we would never have sailed. More than that, though , these special people-ranging from enthusiastic Conrad Gann, a twenty-year-old college student, to quiet, competent Rinn Wright, forty two-have shown a real concern that the trainees learn. Whether it means going over splicing technique, teaching knots such as bowlines or sheet bends, or helping with bearings and chart work , each of the crew has shown patience and humor in passing on the art of sail. Sue Farady, twenty-three, has done a remarkable job of feeding us all , especially considering this is her first stint in the galley . She was &quot;promoted&quot; from deckhand in order to slave over Fang, the despised diesel cookstove, but she still finds the time to help out with instruction and sail-handling. As I continue bow watch, keeping an eye on the early morning trawlers chugging out to fish the Stellwagen Bank, I think back to all the times and places that have made this trip unique: ihe first overnight sail &quot;Down East&quot; into a thick Maine fog, watching the sun sizzle into the sea from a granite outcrop atop Hurricane Island; accepting the challenge of the Outward Bound kids to jump off the dock into the frigid ocean waters; screaming down Penobscot Bay on a glorious , blustery , sunny day in the company of the Maine schooners-the Adventure, fast and venerable, the Roseway with her crimson sails, Angelique with distinctive black sails , Mary Day with her newly painted black hull; exchanging miniature cannon-fire salutes using fierce but harmless blanks. My favorite island was Isle au Haut. Named by Champlain (&quot;high island&quot;), it rises to 554ft and is one of the gems of Penobscot Bay. We dropped anchor one night in Moore&#39;s Harbor and rowed ashore the next day, equipped with buckets and high hopes for scavenging much of our supper from nearby Seal Trap Cove. Actually , seals were never trapped there. Champlain thought the cove so still and mirror-like, he named it Trappe de Ciel, &quot; trap of the sky.&quot; The present name is our awkward way of Anglicizing it. At first hesitant to get wet and muddy , the trainees were soon knee-deep in the muck of low tide, finding more seaworms than clams, but having a great time anyway . Heidi &#39; s shoes sunk out of sight (&quot;Ouch! &quot;) and John lost his balance, landing flat on his back in the mud flats. SEA HISTORY, SPRING 1989

Captain J.B. led us further down to a point where he knew of a plentiful supply of green spiny sea urchins hiding under the rocks. Pulling out a pair of dull scissors, he cut around the five-cornered mouth of one creature and removed it, revealing brown eggs inside. &quot;Here, John. Try this. They&#39;re delicious. &quot; &quot;Raw? Really?&quot; &quot;Sure. Better than caviar. Look.&quot; J.B. downed a thick glob. So, in addition to the plentiful supply of whelks and mussels and a few clams, we came back aboard with numerous sea urchins. We had appetizers from the sea, capped by urchin eggs served on toast with a bit of chilled white wine provided by the captain to wash them down. We kept the urchin &#39; s bony mouth parts, which, when cleaned up and dried, are called Aristotle&#39;s lanterns. That night, we camped out on Isle au Haut and, gathering everyone around a campfire built safely on a rocky point, I finally got this determinedly non-musical bunch to sing. We went from old folk songs to sea chanties to African rounds. Somehow or other, we ended up singing an impromptu round of &quot;Louie, Louie,&quot; desecrating the holy night air of Isle au Haut with sounds that closely resembled cats yowling. Each island seemed to have its own character. The Barred Islands, so called because they are connected at low tide by sand bars, were resplendent with red and white wild roses and beach peas. Tiny bumblebees assaulted the sumac growing in thick groves towards the summit. Butter Island had a pleasant meadow on top, a spectacular view , a rare sand beach , and a small sign attached to a tree asking us not to litter, signed by a Boston Cabot of High Street.

A whale off the port bow spouts again , but I cannot see hi s body. As I peer off the stern port quarter searching for the whale, I see the first glimpse of the sun. It rises, blood-red , incandescent and ovoid, out of the sea. There is just a smudge of cloud darkening it on the horizon. It is 5:25 AM. I&#39;ve never been so conscious of the earth moving. Within minutes, the sun has cleared the horizon, turned into a yellow ball, and turned too bright to look at. Heidi relieves me of my watch and tells me to take the helm . Our last day aboard has dawned. .i.

Mark Pendergrast, a freelance tra vel writer based in Stowe, Vermont, has participated in sail-training trips for teenagers over a ten-year period on a variety of ships. He tells us he would be happy to entertain other story ideas or sailing invitations. 31