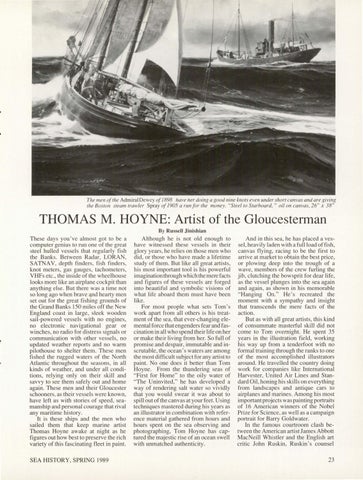 The men of the Admiral Dewey of 1898 have ner doing a good nine knots even under short canvas and are giving the Boston steam trawler Spray of 1905 a run for the money. &quot;Steel to Starboard, &quot; oil on canvas, 26&quot; x 38&quot;

THOMAS M. HOYNE: Artist of the Gloucesterman These days you&#39;ve almost got to be a computer genius to run one of the great steel hulled vessels that regularly fish the Ban.ks. Between Radar, LORAN , SA TN AV , depth finders, fish finders , knot meters , gas gauges, tachometers, VHFs etc. , the inside of the wheelhouse looks more like an airplane cockpit than anything else. But there was a time not so long ago when brave ~nd hearty men set out for the great fishing grounds of the Grand Banks 150 miles off the New England coast in large, sleek wooden sail-powered vessels with no engines, no electronic navigational gear or winches, no radio for distress signals or communication with other vessels, no updated weather reports and no warm pilothouse to shelter them. These men fished the rugged waters of the North Atlantic throughout the seasons, in all kinds of weather, and under all conditions, relying only on their skill and savvy to see them safely out and home again. These men and their Gloucester schooners, as their vessels were known, have left us with stories of speed, seamanship and personal courage that rival any maritime history. It is these ships and the men who sailed them that keep marine artist Thomas Hoyne awake at night as he figures out how best to preserve the rich variety of this fascinating fleet in paint. SEA HISTORY, SPRING 1989

By Russell Jinishian Although he is not old enough to have witnessed these vessels in their glory years, he relies on those men who did, or those who have made a lifetime study of them. But like all great artists, his most important tool is his powerful imagination through which the mere facts and figures of these vessels are forged into beautiful and symbolic vi sions of what life aboard them must have been like. For most people what sets Tom&#39;s work apart from all others is his treatment of the sea, that ever-changing elemental force that engenders fear and fascination in all who spend their life on her or make their living from her. So full of promise and despair, immutable and inscrutable, the ocean&#39;s waters are among the most difficult subject for any arti st to paint. No one does it better than Tom Hoyne. From the thundering seas of &quot;First for Home&quot; to the oily water of &quot;The Uninvited ,&quot; he has developed a way of rendering salt water so vividly that you would swear it was about to spill out of the canvas at your feet. Using techniques mastered during his years as an illustrator in combination with reference material gathered from hours and hours spent on the sea observing and photographing, Tom Hoyne has captured the majestic rise of an ocean swell with unmatched authenticity.

And in this sea, he has placed a vessel , heavily laden with a full load offish, canvas flying, racing to be the first to arrive at market to obtain the best price, or plowing deep into the trough of a wave, members of the crew furling the jib, clutching the bowsprit for dear life, as the vessel plunges into the sea again and again , as shown in his memorable &quot;Hanging On.&quot; He &#39;s recreated the moment with a sympathy and insight that transcends the mere facts of the action. But as with all great artists, this kind of consummate masterful skill did not come to Tom overnight. He spent 35 years in the illustration field, working his way up from a tenderfoot with no formal training through the ranks to one of the most accompli shed illustrators around. He travelled the country doing work for companies like International Harvester, United Air Lines and Standard Oil, honing his skills on everything from landscapes and antique cars to airplanes and marines. Among his most important projects was painting portraits of 16 American winners of the Nobel Prize for Science, as well as a campaign portrait for Barry Goldwater. In the famous courtroom clash between the American artist James Abbott MacNeill Whistler and the English art critic John Ruskin , Ruskin&#39;s counsel