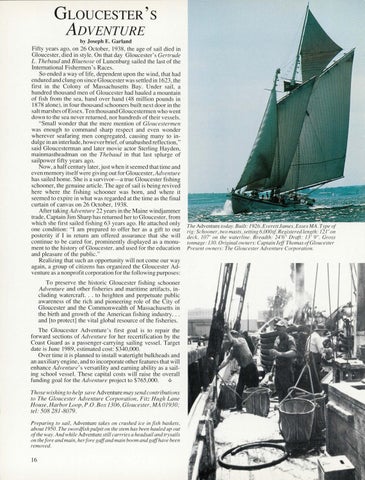 GLOUCESTER&#39; s ADVENTURE by Joseph E. Garland Fifty years ago, on 26 October, 1938, the age of sail died in Gloucester, died in style. On that day Gloucester &#39; s Gertrude L. Thebaud and Bluenose of Lunenburg sailed the last of the International Fishennen &#39; s Races. So ended a way of life, dependent upon the wind , that had endured and clung on since Gloucester was settled in 1623, the first in the Colony of Massachusetts Bay. Under sail, a hundred thousand men of Gloucester had hauled a mountain of fish from the sea, hand over hand (48 million pounds in 1878 alone), in four thousand schooners built next door in the salt marshes of Essex . Ten thousand G loucestermen who went down to the sea never returned , nor hundreds of their vessels. &quot;Small wonder that the mere mention of Gloucestermen was enough to command sharp respect and even wonder wherever seafaring men congregated, causing many to indulge in an interlude, however brief, ofunabashed reflection ,&quot; said Gloucesterman and later movie actor Sterling Hayden, mainmastheadman on the Thebaud in that last splurge of sailpower fifty years ago. Now, a half century later, just when it seemed that time and even memory itself were giving out for Gloucester, Adventure has sailed home . She is a survivor-a true Gloucester fishing schooner, the genuine article. The age of sail is being revived here where the fishing schooner was born , and where it seemed to expire in what was regarded at the time as the final curtain of canvas on 26 October, 1938. After taking Adventure 22 years in the Maine windjammer trade, Captain Jim Sharp has returned her to Gloucester, from which she first sailed fishing 63 years ago. He attached only one condition: &quot; I am prepared to offer her as a gift to our posterity if I in return am offered assurance that she will continue to be cared for, prominently displayed as a monument to the hi story of Gloucester, and used for the education and pleasure of the public.&quot; Realizing that such an opportunity will not come our way again, a group of citizens has organized the Gloucester Adventure as a nonprofit corporation for the following purposes:

To preserve the historic Gloucester fishing schooner Adventure and other fisheries and maritime artifacts, including watercraft. . . to heighten and perpetuate public awareness of the rich and pioneering role of the City of G loucester and the Commonwealth of Massachusetts in tht&lt; birth and growth of the American fishing industry .. . and [to protect] the vital global resource of the fisheries. The Gloucester Adventure &#39; s first goal is to repair the forward sections of Adventure for her recertification by the Coast Guard as a passenger-carrying sailing vessel. Target date is June 1989, estimated cost: $340,000. Over time it is planned to install watertight bulkheads and an auxiliary engine, and to incorporate other features that will enhance Adventure&#39;s versatility and earning ability as a sailing school vessel. These capital costs will raise the overall funding goal for the Adventure project to $765,000. w

Those wishing to help save Adventure may send contributions to The Gloucester Adventure Corporation, Fitz Hugh Lane House, Harbor Loop , P.O. Box 1306, Gloucester, MA 01930; tel: 508 281-8079. Preparing to sail, Adventure takes on crushed ice in fish baskets, about 1950. The swordfish pulpit on the stem has been hauled up out of the way. And while Adventure still carrries a headsail and try sails on the fore and main, herfore gaffand main boom and gaff have been removed.