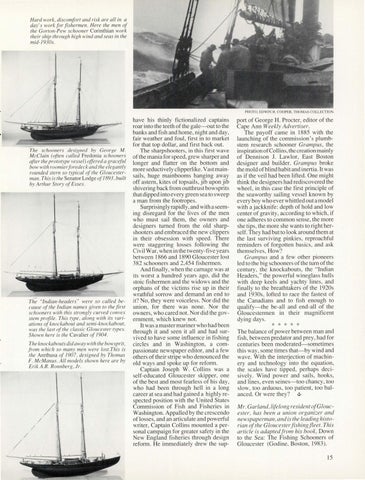 Hard work, discomfort and risk are all in a day&#39;s work for fishermen. Here the men of the Gorton-Pew schooner Corinthian work their ship through high wind and seas in the mid-1930s.

The schooners designed by George M. McClain (often called Fredonia schooners after the prototype vessel) offered a graceful bow with roomierforedeck and the elegantly rounded stern so typical of th e Gloucesterman. This is the Senator Lodge of 1893, built by Arthur Story of Essex.

The &quot;Jndian-h eaders&quot; were so called because of the lndian names given to the first schooners with this strongly curved convex stem profile. This type , along with its variations of knockabout and semi-knockabout , was the las! of the classic Gloucester types . Shown here is the Cavalier of 1904. The knockabouts did away with the bowsprit , from which so many men were lost.This is the Arethusa of 1907, designed by Thomas F. McManus. All models shown here are by Erik A.R. Ronnberg , Jr.

have his thinly fictionalized captains roar into the teeth of the gale--out to the banks and fish and home, ni ght and day, fair weather and foul, first in to market for that top dollar, and first back out. The sharpshooters, in thi s first wave of the mania for speed, grew sharper and longer and flatter on the bottom and more seductivel y clipperlike. Vast mainsail s, huge mainbooms hangi ng away off astern, kites of topsails, jib upon jib shivering back from outthrust bowsprits that dipped into every green sea to sweep a man from the footropes. Surprisingly rapidly, and with a seeming disregard for the lives of the men who must sail them , the owners and designers turned from the old sharpshooters and embraced the new clippers in their obsession with speed. There were staggering losses following the Civil War, when in the twenty-five years between 1866 and 1890 Gloucester lost 382 schooners and 2,454 fishermen. And finally , when the carnage was at its worst a hundred years ago, did the stoic fishermen and the widows and the orphans of the victims rise up in their wrathful sorrow and demand an end to it? No, they were voiceless. Nor did the union, for there was none. Nor the owners, who cared not. Nor did the government, which knew not. It was a master mariner who had been through it and seen it all and had survived to have ome influence in fishing circ les and in Washington , a compassionate newspaper editor, and a few others of their stripe who denounced the old ways and spoke up for reform . Captain Joseph W. Collins was a self-educated Gloucester skipper, one of the best and most fearless of his day, who had been through hell in a long career at sea and had gained a highly respected position with the United States Commission of Fish and Fisheries in Washington. Appalled by the crescendo of losses, and an articulate and powerful writer, Captain Collins mounted a personal campaign for greater safety in the New England fisheries through design reform. He immediately drew the sup-

port of George H. Procter, editor of the Cape Ann Weekly Advertiser. The payoff came in 1885 with the launching of the commission &#39;s plumbstem research schooner Grampus, the inspiration of Collins, the creation mainly of Dennison J. Lawlor, East Boston designer and builder. Grampus broke the mold of blind habit and inertia. It was as if the veil had been lifted . One might think the designers had rediscovered the wheel, in this case the first principle of the seaworthy sailing vessel known by every boy who ever whittled out a model with a jackknife: depth of hold and low center of gravity, according to which, if one ad heres to common sense, the more she tips, the more she wants to right herself. They had but to look around them at the last surviving pinkies, reproachful reminders of forgotten basics, and ask themse lves, How? Grampus and a few other pioneers led to the big schooners of the turn of the century , the knockabouts , the &quot;Indian Headers,&quot; the powerful wineglass hulls with deep keels and yachty lines, and finally to the breathtakers of the 1920s and 1930s, lofted to race the fastest of the Canadians and to fish enough to qualify-the be-all and end-all of the Gloucestermen in their magnificent dying days.

The balance of power between man and fish , between predator and prey , had for centuries been moderated-sometimes thi s way, some times that-by wind and wave. With the interjection of machinery and technology into the equation , the scales have tipped , perhaps decisively. Wind power and sails, hooks, and lines , even seines-too chancy, too slow, too arduous, too patient, too balanced. Or were they? .V

Mr. Garland, lifelong resident ofGloucester, has been a union organizer and newspaperman , and is the leading historian of the Gloucesterfishingfle et. This article is adaptedjiÂˇom his book, Down to the Sea: The Fishing Schooners of Gloucester (God ine, Boston, 1983). IS