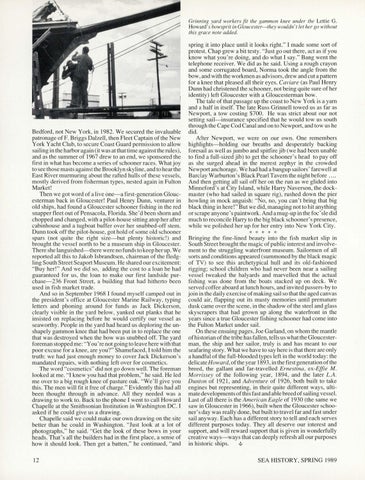 Bedford, not New York, in 1982. We secured the invaluable patronage ofF. Briggs Dalzell , then Fleet Captain of the New York Yacht Club, to secure Coast Guard permission to allow sailing in the harbor again (it was at that time against the rules) , and as the summer of 1967 drew to an end , we sponsored the first in what has become a series of schooner races. What joy to see those masts against the Brooklyn skyline, and to hearthe East River murmuring about the rafted hulls of these vessels, mostly derived from fi sherman types , nested again in Fulton Market! Then we got word of a live one-a first-generation Gloucesterman back in Gloucester! Paul Henry Dunn, venturer in old ships , had found a Gloucester schooner fi shing in the red snapper fleet out of Pensacola, Florida. She &#39;d been shorn and chopped and changed , with a pilot-house sitting atop her after cabinhouse and a tugboat buffer over her snubbed-off stem. Dunn took off the pilot-house, got hold of some old schooner spars (not quite the right size- but plenty historic!) and brought the vessel north to be a museum ship in Gloucester. There she languished- there were no funds to keep her up . We reported all this to Jakob Isbrandtsen, chairman of the fledgling South Street Seaport Museum. He shared our excitement: &quot;Buy her!&quot; And we did so, adding the cost to a loan he had guaranteed for us, the loan to make our first landside purchase-236 Front Street, a building that had hitherto been used in fish market trade . And so in September 1968 I found myself camped out in the president&#39;s office at Gloucester Marine Railway , typing letters and phoning around for funds as Jack Dickerson, clearly visible in the yard below, yanked out planks that he insisted on replacing before he would certify our vessel as seaworthy. People in the yard had heard us deploring the unshapely gammon knee that had been put in to replace the one that was destroyed when the bow was snubbed off. The yard foreman stopped me: &quot; You &#39; re not going to leave here with that poor excuse for a knee, are you?&quot; Shamefaced, I told him the truth: we had just enough money to cover Jack Dickerson&#39;s mandated repairs , with nothing left over for cosmetics. The word &quot;cosmetics&quot; did not go down well. The foreman looked at me. &quot;I knew you had that problem ,&quot; he said. He led me over to a big rough knee of pasture oak. &quot;We&#39; ll give you this. The men will fit it free of charge.&quot; Evidently this had all been thought through in advance. All they needed was a drawing to work to. Back to the phone I went to call Howard Chapelle at the Smithsonian Institution in Washington DC. I asked if he could give us a drawing . Chapelle said we could make our own drawing on the site better than he could in Washington. &quot;Just look at a lot of photographs,&quot; he said. &quot;Get the look of these bows in your heads. That&#39;s all the builders had in the first place, a sense of how it should look. Then get a batten ,&quot; he continued, &quot;and 12

spring it into place until it looks right.&quot; I made some sort of protest. Chap grew a bit testy . &quot;Just go out there, act as if you know what you &#39; re doing, and do what I say.&quot; Bang went the telephone receiver. We did as he said. Using a rough crayon and some corrugated board, Norma took the angle from the bow , and with the workmen as advisors, drew and cut a pattern for a knee that pleased all their eyes. Caviare (as Paul Henry Dunn had christened the schooner, not being quite sure of her identity) left Gloucester with a Gloucesterman bow. The tale of that passage up the coast to New York is a yarn and a half in itself. The late Russ Grinnell towed us as far as Newport, a tow costing $700. He was strict about our not setting sail-insurance specified that he would tow us south through the Cape Cod Canal and on to Newport, and tow us he did . After Newport, we were on our own. One remembers highlights-holding our breaths and desperately backing foresail as well as jumbo and spitfire jib (we had been unable to find a full-sized jib) to get the schooner&#39; s head to pay off as she surged ahead in the merest zephyr in the crowded Newport anchorage. We had had a bangup sailors&#39; farewell at Barclay Warburton &#39;s Black Pearl Tavern the night before .... And then getting all sail off her on the run as we glided into Minneford &#39; s at City Island, while Harry Naverson, the dockmaster (who had sailed in square rig) , rushed down the pier howling in mock anguish: &quot;No, no, you can&#39;t bring that big black thing in here!&quot; But we did, managing not to hit anything or scrape anyone&#39;s paintwork. And a mug-up in the foe&#39; sle did much to reconcile Harry to the big black schooner&#39;s presence, while we polished her up for her entry into New York City.

Bringing the fine-lined beauty into the fish market slip in South Street brought the magic of public interest and involvement to the struggling waterfront museum. Sailormen of all sorts and conditions appeared (summoned by the black magic of TV) to see this archetypical hull and its old-fashioned rigging; school children who had never been near a sailing vessel tweaked the halyards and marvelled that the actual fishing was done from the boats stacked up on deck. We served coffee aboard at lunch hours , and invited passers-by to join in the daily exercise of making sail so that the aged canvas could air, flapping out its musty memories until premature dusk came over the scene, in the shadow of the steel and glass skyscrapers that had grown up along the waterfront in the years since a true Gloucester fishing schooner had come into the Fulton Market under sail. On these ensuing pages, Joe Garland, on whom the mantle of historian of the tribe has fallen , tells us what the Gloucesterman, the ship and her sailor, truly is and has meant to our seafaring story. What we have to say here is that there are only a handful of the full-blooded types left in the world today: the delicate Howard, of the year 1893 , in the first generation of the breed, the gallant and far-travelled Ernestina , ex-Effie M. Morrissey of the following year, 1894, and the later L.A . Dunton of 1921 , and Adventure of 1926, both built to take engines but representing, in their quite different ways, ultimatedevelopments of this fast and able breed of sailing vessel. Last of all there is the American Eagle of 1930 (the same we saw in Gloucester in 1966), built when the Gloucester schooner &#39; s day was really done, but built to travel far and fast under sail anyway. Each has a different story to tell and each serves different purposes today. They all deserve our interest and support, and will reward support that is given in wonderfully creative ways-ways that can deeply refresh all our purposes -ti in historic ships. SEA HISTORY, SPRING 1989