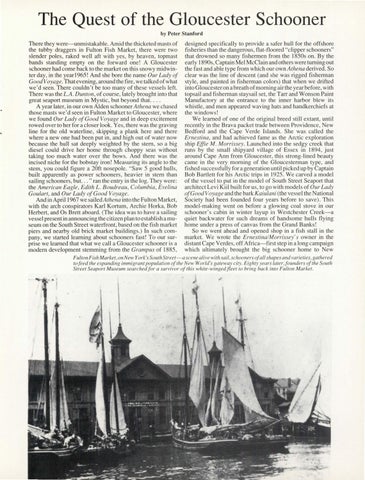 The Quest of the Gloucester Schooner by Peter Stanford

There they were-unmistakable. Amid the thicketed masts of the tubby draggers in Fulton Fish Market, there were two slender poles, raked well aft with yes, by heaven , topmast bands standing empty on the forward one! A Gloucester schooner had come back to the market on this snowy midwinter day, in the year 1965 ! And she bore the name Our Lady of Good Voyage. That evening, around the fire, we talked of what we&#39;d seen. There couldn&#39;t be too many of these vessels left. There was the L.A . Dunton, of course, lately brought into that great seaport museum in Mystic, but beyond that. .. . A year later, in our own Alden schooner Athena we chased those masts we&#39;d seen in Fu lton Market to Gloucester, where we found Our Lady of Good Voyage and in deep excitement rowed over to her for a closer look. Yes , there was the graving line for the old waterline, skipping a plank here and there where a new one had been put in , and high out of water now because the hull sat deeply weighted by the stem, so a big diesel could drive her home through choppy seas without taking too much water over the bows. And there was the incised niche for the bobstay iron! Measuring its angle to the stem, you could figure a 20ft nosepole. &quot;Saw 5 good hulls, built apparently as power schooners, heavier in stem than sailing schooners, but. .. &quot;ran the entry in the log. They were: the American Eagle, Edith L. Boudreau, Columbia, Evelina Goulart, and Our Lady of Good Voyage. And in April 1967 we sailed Athena into the Fulton Market, with the arch conspirators Karl Kortum , Archie Horka, Bob Herbert, and Os Brett aboard. (The idea was to have a sailing vessel present in announcing the citizen plan to establish a museum on the South Street waterfront, based on the fish market piers and nearby old brick market buildings.) In such company, we started learning about schooners fast! To our surprise we learned that what we call a Gloucester schooner is a modem development stemming from the Grampus of 1885 ,

designed specifically to provide a safer hull for the offshore fisheries than the dangerous, flat-floored &quot;clipper schooners&quot; that drowned so many fishermen from the 1850s on. By the early 1890s, Captain Mel McClain and others were turning out the fast and able type from which our own Athena derived. So clear was the line of descent (and she was rigged fisherman style, and painted in fisherman colors) that when we drifted into Gloucesteron a breath of morning air the year before, with topsail and fisherman staysail set, the Tarr and Wonson Paint Manufactory at the entrance to the inner harbor blew its whistle, and men appeared waving hats and handkerchiefs at the windows! We learned of one of the original breed still extant, until recently in the Brava packet trade between Providence, New Bedford and the Cape Verde Islands. She was called the Ernestina, and had achieved fame as the Arctic exploration ship Effie M. Morrissey. Launched into the sedgy creek that runs by the small shipyard village of Essex in 1894, just around Cape Ann from Gloucester, this strong-lined beauty came in the very morning of the Gloucesterman type, and fished successfully for a generation until picked up by Captain Bob Bartlett for his Arctic trips in 1925. We carved a model of the vessel to put in the model of South Street Seaport that architect Levi Kiil built for us, to go with models of Our Lady ofGood Voyage and the bark Kaiulani (the vessel the National Society had been founded four years before to save). This model-making went on before a glowing coal stove in our schooner&#39;s cabin in winter layup in Westchester Creek-a quiet backwater for such dreams of handsome hulls flying home under a press of canvas from the Grand Banks! So we went ahead and opened shop in a fish stall in the market. We wrote the Ernestina/Morrissey&#39; s owner in the distant Cape Verdes, off Africa-first step in a long campaign which ultimately brought the big schooner home to New

Fulton Fish Market, on New York&#39;s South Street-a scene alive with sail, schooners ofall shapes and varieties.gathered to feed the expanding immigrant population of the New World&#39;s gateway city. Eighty years later.founders of the South Street Seaport Museum searched for a survivor of this white-winged fleet to bring back into Fulton Market.