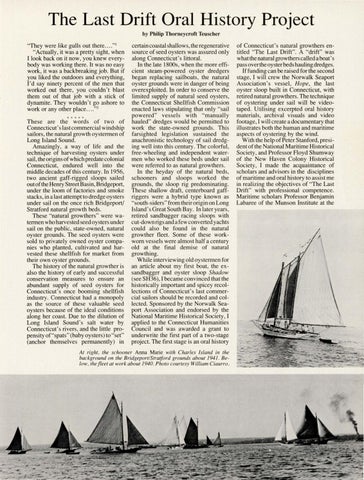 &quot;They were like gulls out there .... &quot; 1 &quot;Actually, it was a pretty sight, when I look back on it now, you knew everybody was working there. It was no easy work, it was a backbreaking job. But if you liked the outdoors and everything, I&#39;d say ninety percent of the men that worked out there, you couldn&#39;t blast them out of that job with a stick of dynamjte. They wouldn&#39;t go ashore to work or any other place ... .&quot;2 â&amp;#x20AC;˘***â&amp;#x20AC;˘

These are the words of two of Connecticut&#39;s last commercial windship sailors, the natural growth oystermen of Long Island Sound. Amazingly, a way of life and the technique of harvesting oysters under sail, the origins of which predate colonial Connecticut, endured well into the middle decades of this century. In 1956, two ancient gaff-rigged sloops sailed out of the Henry Street Basin, Bridgeport, under the loom of factories and smoke stacks, in a last attempt to dredge oysters under sail on the once rich Bridgeport/ Stratford natural growth beds. These &quot;natural growthers&quot; were watermen who harvested seed oysters under sail on the public, state-owned, natural oyster grounds. The seed oysters were sold to privately owned oyster companies who planted, cultivated and harvested these shellfish for market from their own oyster grounds. The history of the natural growther is also the history of early and successful conservation measures to ensure an abundant supply of seed oysters for Connecticut&#39;s once booming shellfish industry. Connecticut had a monopoly as the source of these valuable seed oysters because of the ideal conditions along her coast. Due to the dilution of Long Island Sound &#39; s salt water by Connecticut&#39;s rivers, and the little propensity of&quot;spats&quot; (baby oysters) to &quot;set&quot; (anchor themselves permanently) in

certain coastal shallows, the regenerative source of seed oysters was assured only along Connecticut&#39; s littoral. In the late 1800s, when the more efficient steam-powered oyster dredgers began replacing sailboats, the natural oyster grounds were in danger of being overexploited. In order to conserve the limited supply of natural seed oysters, the Connecticut Shellfish Commission enacted laws stipulating that only &quot;sail powered&quot; vessel s with &quot; manually hauled&quot; dredges would be permitted to work the state-owned grounds. This farsighted legislation sustained the anachronistic technology of sail dredging well into this century. The colorful, free-wheeling and independent watermen who worked these beds under sail were referred to as natural growthers. In the heyday of the natural beds, schooners and sloops worked the grounds, the sloop rig predominating. These shallow draft, centerboard gaffriggers were a hybrid type known as &quot;south-siders&quot; from their origin on Long Island &#39; s Great South Bay. In later years, retired sandbagger racing sloops with cut-down rigs and a few converted yachts could also be found in the natural growther fleet. Some of these workworn vessels were almost half a century old at the final demi se of natural growthing. While interviewing old oystermen for an article about my first boat, the exsandbagger and oyster sloop Shadow (see SH36), I became convinced that the historically important and spicey recollections of Connecticut&#39;s last commercial sailors should be recorded and collected. Sponsored by the Norwalk Seaport Association and endorsed by the National Maritime Historical Society, I applied to the Connecticut Humanities Council and was awarded a grant to underwrite the first part of a two-stage project. The first stage is an oral history

At right, the schooner Anna Marie with Charles Island in the background on the Bridgeport/Stratford grounds about 1941 . Below, the fleet at work about 1940. Photo courtesy William Ciaurro .,

of Connecticut&#39;s natural growthers entitled &quot;The Last Drift&quot;. A &quot;drift&quot; was whatthe natural growthers called a boat&#39;s pass over the oyster beds hauling dredges. If funding can be raised for the second stage, I will crew the Norwalk Seaport Association &#39;s vessel, Hope, the last oyster sloop built in Connecticut, with retired natural growthers. The technique of oystering under sail will be videotaped. Utilising excerpted oral history materials, archival visuals and video footage, I will create a documentary that illustrates both the human and maritime aspects of oystering by the wind. With the help of Peter Stanford, president of the National Maritime Historical Society, and Professor Floyd Shumway of the New Haven Colony Historical Society, I made the acquaintance of scholars and advisors in the disciplines of maritime and oral history to assist me in realizing the objectives of &quot;The Last Drift&quot; with professional competence. Maritime scholars Professor Benjamin Labaree of the Munson Institute at the