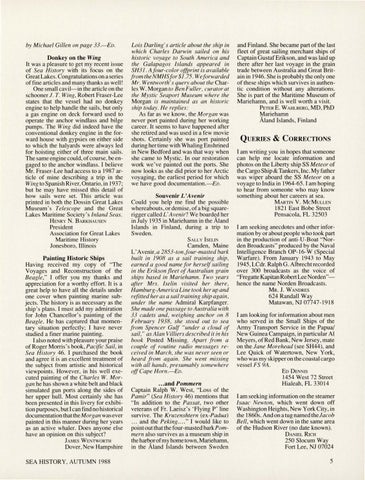 Lois Darling&#39;s article about the ship in which Charles Darwin sailed on his Donkey on the Wing historic voyage to South America and It was a pleasure to get my recent issue the Galapagos Islands appeared in of Sea History with its focus on the SH31. A four-color offprint is available Great Lakes. Congratulations on a series fromtheNMHSfor$1.75. Weforwarded Mr. Wentworth&#39;s query about the Charof fine articles and many thanks as well! One small cavil-in the article on the les W. Morgan to Ben Fuller, curator at schooner J. T. Wing, Robert Fraser-Lee the Mystic Seaport Museum where the states that the vessel had no donkey Morgan is maintained as an historic engine to help handle the sails, but only ship today. He replies: As far as we know, the Morgan was a gas engine on deck forward used to operate the anchor windlass and bilge never port painted during her working pumps. The Wing did indeed have the career. It seems to have happened after she retired and was used in a few movie conventional donkey engine in the forward house with gypsies on either side shots. Certainly she was port painted to which the halyards were always led during hertime with Whaling Enshrined in New Bedford and was that way when for hoisting either of three main sails. The same engine could, of course, be en- Âˇ she came to Mystic. In our restoration gaged to the anchor windlass. I believe work we&#39;ve painted out the ports. She now looks as she did prior to her Arctic Mr. Fraser-Lee had access to a 1987 article of mine describing a trip in the voyaging, the earliest period for which Wing to Spanish River, Ontario, in l 937; we have good documentation.-ÂŁ0. but he may have missed this detail of Souvenir L&#39;A venir how sails were set. This article was printed in both the Dossin Great Lakes Could you help me find the possible whereabouts, or demise, of a big squareMuseum &#39;s Telescope and the Great rigger called L&#39; Avenir? We boarded her Lakes Maritime Society &#39;s Inland Seas. H ENRY N. BARKHA USE in July 1935 in Mariehamn in the Aland Islands in Finland, during a trip to President Sweden. Association for Great Lakes S ALL y l SELIN Maritime History Camden, Maine Jonesboro, Illinoi s L&#39; Avenir, a 2853-ton,four-masted bark built in 1908 as a sail training ship, Painting Historic Ships earned a good name for herself sailing Having received my copy of &quot;The in the Erikson fleet of Australian grain Voyages and Reconstruction of the ships based in Mariehamn. Two years Beagle,&quot; I offer you my thanks and after Mrs . lselin visited her there, appreciation for a worthy effort. It is a Hamburg-America Line took her up and great help to have all the details under refitted her as a sail training ship again, one cover when painting marine subunder the name Admiral Karpfanger. jects. The history is as necessary as the She made one passage to Australia with ship&#39;s plans. I must add my admiration 33 cadets and, weighing anchor on 8 for John Chancellor&#39;s painting of the February 1938, she stood out to sea Beagle. He has captured that momentary situation perfectly; I have never from Spencer Gulf &quot;under a cloud of sail,&quot; as Alan Villiers described it in his studied a finer marine painting. I also noted with pleasure your praise book Posted Miss ing. Apart from a couple of routine radio messages reof Roger Morris&#39;s book, Pacific Sail, in Sea History 46. I purchased the book ceived in March, she was never seen or and agree it is an excellent treatment of heard from again. She went missing with all hands, presumably somewhere the subject from artistic and historical viewpoints. However, in hi s well exe- off Cape Horn.-ED. cuted painting of the Charles W. Mor... and Pommern gan he has shown a white belt and black simulated gun ports along the sides of Captain Ralph W. West, &quot;Loss of the her upper hull. Most certainly she has Pamir&quot; (Sea History 46) mentions that been presented in this livery for exhibi- &quot; In addition to the Passat, two other veterans of Fr. Laeisz&#39;s &#39;Flying P &#39; line tion purposes , but I can find no historical documentation that the Morgan was ever survive. The Kruzenshtern (ex-Padua) .. . and the Peking .... &quot; I would like to painted in this manner during her years as an active whaler. Does anyone else point out that the four-masted barkPommern also survives as a museum ship in have an opinion on this subject? J AMES W ENTWORTH the harb9rof my home town, Marieharnn, in the Aland Islands between Sweden Dover, New Hampshire SEA HISTORY, AUTUMN 1988

and Finland. She became part of the last fleet of great sailing merchant ships of Captain Gustaf Erikson, and was laid up there after her last voyage in the grain trade between Australia and Great Britain in 1946. She is probably the only one of these ships which survives in authentic condition without any alterations. She is part of the Maritime Museum of Mariehamn , and is well worth a visit. P ETER E. wAHLB ERG, MD, PhD Mariehamn Aland Islands, Finland

I am writing you in hopes that someone can help me locate information and photos on the Liberty ship SS Meteor of the Cargo Ship &amp; Tankers, Inc. My father was wiper aboard the SS Meteor on a voyage to India in 1964-65. I am hoping to hear from someone who may know something about her careers at sea. M ARTIN V. McM uLLE 1821 East Bobe Street Pensacola, FL 32503 I am seeking anecdotes and other information by or about people who took part in the production of anti-U-Boat &quot;Norden Broadcasts&quot; produced by the Naval Intelligence Branch OP- 16-W (Special Warfare) . From January 1943 to May 1945 , LCdr. Ralph G. Albrecht recorded over 300 broadcasts as the voice of &quot;Fregatte Kapitan Robert Lee Norden&quot;hence the name Norden Broadcasts. MR.

624 Randall Way Matawan , NJ 07747- 1918 I am looking for information about men who served in the Small Ships of the Army Transport Service in the Papua/ New Guinea Campaign, in particular Al Meyers, of Red Bank, New Jersey, mate on the Jane Morehead (see SH44), and Lee Quick of Watertown, New York, who was my skipperon thecoastalcargo vessel FS 9A. Eo D ENNIS 1454 West 72 Street Hialeah, FL 33014 I am seeking information on the steamer Isaac Newton, which went down off Washington Heights, New York City, in the 1860s. And on a tug named th elacob Bell, which went down in the same area of the Hudson River (no date known). D ANIEL RICH