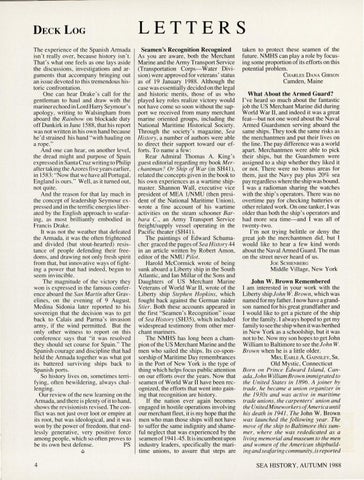 DECK LOG The experience of the Spanish Armada isn &#39; t really over, because hi story isn &#39; t. That &#39;s what one feels as one lays aside the discussions, investigations and arguments that accompany bringing out an issue devoted to this tremendous historic confrontation. One can hear Drake&#39;s call for the gentleman to haul and draw with the marinerechoed in Lord Harry Seymour&#39;s apology, writing to Walsingham from aboard the Rainbow on blockade duty off Dunkirk in June 1588, that his report was not written in hi s own hand because he &#39;d strained hi s hand &quot; with hauling on a rope.&quot; And one can hear, on another level , the dread might and purpose of Spain expressed in Santa Cruz writing to Philip after taking the Azores five years earlier, in 1583: &quot; Now that we have all Portugal , England is ours.&quot; Well , as it turned out, not quite. And the reason for that lay much in the concept of leadership Seymour expressed and in the terrific energies liberated by the English approach to seafaring, as most brilliantl y embodied in Francis Drake. It was not the weather that defeated the Armada, it was the often frightened and divided (but stout-hearted) resistance of people defending their freedom s, and drawing not only fresh spirit from that, but innovative ways of fi ghting a power that had indeed, begun to seem invincible. The magnitude of the victory they won is expressed in the famous conference aboard the San Martin after Gravelines, on the evening of 9 August. Medina Sidonia later reported to hi s sovereign that the deci sion was to get back to Calais and Parma &#39;s invasion army, if the wind permitted. But the only other witness to report on thi s conference says that &quot; it was resolved they should set course for Spain.&quot; The Spanish courage and di sc ipline that had held the Armada together was what got its battered surviving ships back to Spanish ports. So hi story lives on, sometimes terri fying, often bewildering, always challenging. Our review of the new learning on the Armada, and there is plenty of it to hand, shows the rev isionists revi sed. The conflict was not just over loot or empire at its root, but was ideological , and it was won by the power of freedom , that endless ly generative, very positive force among people, which so often proves to be its own best defense. PS .i,

LETTERS Seamen&#39;s Recognition Recognized As you are aware, both the Merchant Marine and the Army Transport Service (Transportation Corps-Water Division) were approved for veterans&#39; status as of 19 January 1988. Although the case was essentia lly decided on the legal and historic merits, those of us who played key roles realize victory would not have come so soon without the support we received from many merchant marine oriented groups, including the National Maritime Hi storical Society. Through the soc iety &#39;s magazine, Sea History, a number of authors were able to direct their support toward our efforts. To name a few : Rear Admiral Thomas A. King&#39; s guest editorial regarding my book Merchantman ? Or Ship of War (in SH41), related the concepts given in the book to hi s own experiences as a wartime shipmaster. Shannon Wall , executive vice president of MEA l/NMU (then president of the National Maritime Union) , wrote a fine account of hi s wartime activities on the steam schooner Barbara C., an Army Transport Service freight/supply vessel operating in the Pacific theater (SH41 ). The paintings of Edward Schumacher graced the pages of Sea History44 in an article written by Robert Amon, ed itor of the NMU Pilot. Harold McCormick wrote of being sunk aboard a Liberty ship in the South Atlantic, and Ian Millar of the Sons and Daughters of US Merchant Marine Veterans of World War II, wrote of the Liberty ship Stephen Hopkins, which fought back against the German raider Stier. Both these accounts appeared in the first &quot;Seamen&#39; s Recognition &quot; iss ue of Sea History (SH35), which included widespread testimony from other merchant mariners. The NMHS has long been a champion of the US Merchant Marine and the men who sailed the ships. Its co-sponsorship of Maritime Day remembrances in the Port of New York is the type of thing which helps focus public attention on our efforts over the years. Now that seamen of World War II have been recogn ized, the efforts that went into gaining that recognition are history. If the nation ever again becomes engaged in hostile operations involving our merchant fleet, it is my hope that the men who man those ships will not have to suffer the same indignity and shameful neglect that was experienced by the seamen of 1941-45. It is incumbent upon industry leaders, specifically the maritime unions, to assure that steps are

taken to protect these seamen of the future. NMHS can play a role by focusing some proportion of its efforts on this potential problem. CHARLES DANA GIBSON

What About the Armed Guard? I&#39;ve heard so much about the fantastic job the US Merchant Marine did during World War II, and indeed it was a great feat-but not one word about the Naval Armed Guardsmen serving aboard the same ships. They took the same risks as the merchantmen and put their lives on the line. The pay difference was a world apart. Merchantmen were able to pick their ships, but the Guardsmen were assigned to a ship whether they liked it or not. There were no bonus areas for them, just the Navy pay plus 20% sea pay regardless where the ship was bound. I was a radioman sharing the watches with the ship &#39;s operators. There was no overtime pay for checking batteries or other related work. On one tanker, I was older than both the ship &#39;s operators and had more sea time-and I was all of twenty-two. I &#39;m not trying belittle or deny the great job the merchantmen did , but T would like to hear a few kind words about the Naval Armed Guard. The man on the street never heard of us. JoE SCHIENBERG

John W. Brown Remembered I am interested in your work with the Liberty ship John W. Brown, which was named for my father. I now have a grandson named for his great grandfather and I would like to get a picture of the ship for the family . I always hoped to get my fam iIy to see the ship when it was berthed in New York as a schoolship, but it was not to be. Now my son hopes to get John William to Baltimore to see the John W. Brown when he is a little older. MRS. EARLE A. GAINSLEY, SR. Old Mystic, Connecticut Born on Prince Edward Island, Canada .John William Brown immigrated to the United States in 1896. A joiner by trade, he became a union organizer in the 1930s and was active in maritime trade unions, the carpenters&#39; union and the United Mineworkers ofAmerica until his death in 1941 . The John W. Brown was launched the following year. The move of the ship to Baltimore this summer, where she was rededicated as a living memorial and museum to the men and women of the American shipbuilding and seafaring community, is reported SEA HISTORY, AUTUMN 1988