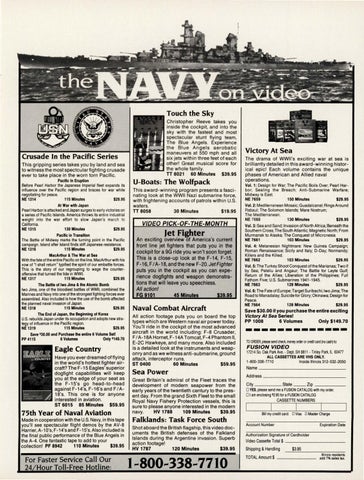 This gripping series takes you by land and sea to witness the most spectcular fighting crusade ever to take place in the worn torn Pacific. Pacific In Eruption Before Pearl Harbor the Japanese Imperial fleet expands its influence over the Pacific region and braces for war while negotiating for peace. NE 1314 115 Minutes $29.95 At War with Japan Pearl Harbor is attacked and Japan surges to early victories on a series of Pacific Islands. America throws its entire industrial weight into the war effort to slow Japan 's march to California. NE 1315 130 Minutes $29.95 Pacific in Transition The Battle of Midway marks the turning point in the Pacific campaign. Island after Island finds stiff Japanese resistance. NE 1316 115 Minutes $29.95 MacArthur & The War at Sea With the fate of the entire Pacific on the line, MacArthur with his vow of "I shall return" typified the spirit of our embattle forces. This is the story of our regrouping to wage the counteroffensive that turned the tide in WWII. NE 1317 115 Minutes $29.95 The Battle of lwo Jima & the Atomic Bomb lwo Jima, one of the bloodiest battles of WWII, combined the Marines and Navy into one oflhe strongest fighting forces ever assembled. Also included is how the use of the bomb affected the planned naval invasion of Japan. NE 1318 115 Minutes $29.95 The End of Japan, the Beginning of Korea U.S. rebuilds Japan under its occupation and adopts new strategy of influence in the Pacific region. NE 1319 115 Minutes $29.95 Save '30.00 and Purchase the entire 6 Volume Set! PP 4115 6 Volumes Only '149.70

Eagle Country Have you ever dreamed of flying in the world's hottest fighter aircraft? The F-15 Eagles' superior dogfight capabilities will keep you at the edge of your seat as the F-15's go head-to-head against F-14's, F-16's and F/A18's. This one is for anyone interested in aviation. ST 6015 85 Minutes $59.95

Christopher Reeve takes you inside the cockpit, and into the sky with the fastest and most spectacular stunt flying team, The Blue Angels. Experience the Blue Angels aerobatic ,~~Eji'j maneuvers at 550 mph and all H six jets within three feet of each other! Great musical score for the whole family. TT 8021 60 Minutes $39.95

An exciting overview of America's current front line jet fighters that puts you in the cockpit for a 9G ride you won't soon forget This is a close-up look at the F-14, F-15, F-16, FI A-18, and the new F-20. Jet Fighter puts you in the cockpit as you can experience dogfights and weapon demonstrations that will leave you speechless. All action! · FG 9101 45 Minutes t.19.95

Naval Combat Aircraft All action footage puts you on board the top types which are Western naval air power today. You 'll ride in the cockpit of the most advanced aircraft in the world including: F-8 Crusader, FI A-1 BA Hornet, F- 14A Tomcat, F-4 Phantom II, E-2C Hawkeye, and many more. Also included is a detailed look at the instruments and weaponry and as we witness anti-submarine, ground attack, interceptor runs. ST 0400 60 Minutes $59.95

Sea Power Great Britain's admiral of the Fleet traces the development of modern seapower from the early years of the twentieth century to the present day. From the grand Sixth Fleet to the small Royal Navy Fishery Protection vessels, this is sure to please anyone interested in the modern HV 1788 109 Minutes $39.95 navy.