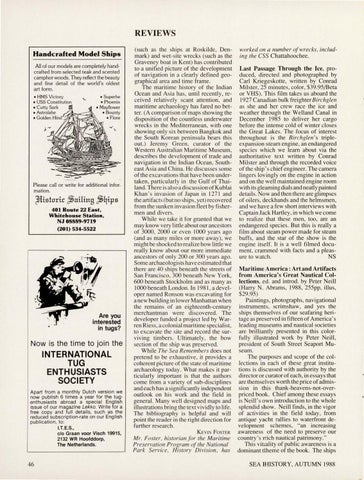 Now is the time to join the

INTERNATIONAL TUG ENTHUSIASTS SOCIETY Apart from a monthly Dutch version we now publish 6 times a year for the tugenthusiasts abroad a special English issue of our magazine Lekko. Write for a free copy and full details, such as the reduced subscripti on-rate on our English publication, to: l.T.E.S.,

(such as the ships at Roski lde, Denmark) and wet-site wrecks (s uch as the Graveney boat in Kent) has contributed to a unified picture of the development of navigation in a clearly defined geographical area and time frame . The maritime history of the Indian Ocean and Asia has, until recently, received relatively scant attention, and maritime archaeology has fared no better. (A comparison of maps showing the disposition of the countless underwater wrecks in the Mediterranean , with one showing only six between Bangkok and the South Korean peninsula bears this out.) Jeremy Green , curator of the Western Australian Maritime Museum, describes the development of trade and navigation in the Indian Ocean, Southeast Asia and China. He discusses some of the excavations that have been undertaken, particularly in the Gulf of Thailand. There is also a discussion of Kublai Khan 's invas ion of Japan in 1271 and the artifacts (but no ships, yet) recovered from the sunken invasion fleet by fishermen and divers. While we take it for granted that we may know very little about our ancestors of 3000, 2000 or even 1000 years ago (and as many miles or more away), we might be shocked to realize how little we really know about our more immediate ancestors of onl y 200 or 300 years ago. Some archaeologists have estimated that there are 40 ships beneath the streets of San Francisco, 300 beneath New York, 600 beneath Stockholm and as many as 1000 beneath London. In 1981 , a developer named Ronson was excavating for a new building in lower Manhattan when the remains of an eighteenth-century merchantman were discovered. The developer funded a project led by Warren Riess, a colonial maritime specia list, to excavate the site and record the surviving timbers. Ultimately , the bow section of the ship was preserved . Whi le The Sea Remembers does not pretend to be exhaustive, it provides a coherent picture of the state of maritime archaeology today. What makes it partic ul arly important is that the authors come from a variety of sub-discip lines and each has a significantl y independent outlook on hi s work and the fie ld in general. Many well designed maps and illustrations bring the text vivid ly to life. The bibliography is helpful and will point the reader in the right direction for further research. K EV!

Mr. Foster, historian for the Maritime Preservation Program of the National Park Service, History Division, has

worked on a number of wrecks, including the CSS Chattahoochee. Last Passage Through the Ice, produced, directed and photographed by Carl Kriegeskotte, written by Conrad Milster, 25 minutes, color, $39.95/Beta or VHS). This film takes us aboard the 1927 Canad ian bu lk freighter Birchglen as she and her crew race the ice and weather through the Welland Canal in December 1985 to deliver her cargo before the intense cold of winter closes the Great Lakes . The focus of interest throughout is the Birchglen's tripleexpansion steam engine, an endangered species which we learn abo ut via the authoritati ve text written by Conrad Milster and through the recorded voice of the ship 's chief engineer. The camera lingers lovingly on the engine in action and on the well maintained engine room with its gleaming dials and neatly painted details. Now and then there are glimpses of oilers , deckhands and the helmsmen , and we have a few short interviews with Captain Jack Hartley , in which we come to realize that these men, too, are an endangered species. But this is really a film abo ut steam power made for steam buffs, and the star of the show is the engine itself. It is a well filmed document, crammed with facts and a pleasNS ure to watch. Maritime America: Art and Artifacts from America' s Great Nautical Collections, ed. and introd. by Peter Neill (Harry N. Abrams, 1988, 255pp, illus, $29.95) Paintings, photographs, navigational instruments, scrimshaw, and yes the ships themselves of our seafaring heritage as preserved in fifteen of America 's leading museums and nautical societies are brilliantly presented in this colorfully illustrated work by Peter Neill , president of South Street Seaport Museum. The purposes and scope of the collections in each of these great institutions is discussed with authority by the director or curator of each, in essays that are themse lves worth the price of admi ssion in this thank-heavens-not-overpriced book. Chief among these essays is Neill's own introduction to the who le splendid show. Neill finds , in the vigor of activities in the field today, from antiq ue yacht rallies to waterfront development schemes, "an increas ing awareness of the need to preserve our country 's rrich nautical patrimony." This vitmlity of public awareness is a dominant ttheme of the book. The ships SEA IHISTORY, AUTUMN 1988