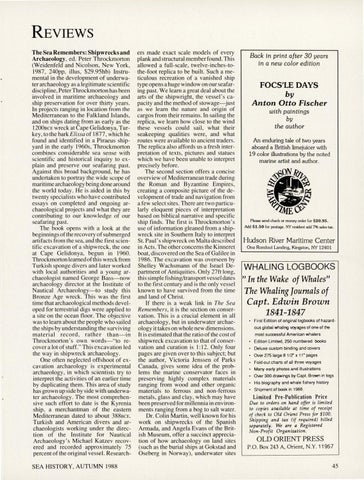 REVIEWS The Sea Remembers: Shipwrecks and Archaeology, ed. Peter Throckmorton (Weidenfeld and Nicolson , New York, 1987, 240pp, illus, $29.95hb) Instrumental in the development of underwater archaeology as a legitimate scientific discipline, Peter Throckmorton has been involved in maritime archaeology and ship preservation for over thirty years. In projects ranging in location from the Mediterranean to the Falkland Islands, and on ships dating from as early as the 1200BCE wreck at Cape Gelidonya, Turkey, to the bark Elissa of 1877, which he found and identified in a Piraeus shipyard in the early 1960s, Throckmorton combines considerable sea sense with scientific and historical inquiry to explain and preserve our seafaring past. Against this broad background, he has undertaken to portray the wide scope of maritime archaeology being done around the world today . He is aided in this by twenty specialists who have contributed essays on completed and ongoing archaeological projects and what they are contributing to our knowledge of our seafaring past. The book opens with a look at the beginnings of the recovery of submerged artifacts from the sea, and the first scientific excavation of a shipwreck, the one at Cape Gelidonya, begun in 1960. Throckmorton learned of this wreck from Turkish sponge divers and later worked with local authorities and a young archaeologist named George Bass-now archaeology director at the Institute of Nautical Archaeology-to study this Bronze Age wreck. This was the first time that archaeological methods developed for terrestrial digs were applied to a site on the ocean floor. The objective was to learn about the people who sailed the ships by understanding the surviving material record, rather than-in Throckmorton ' s own words-"to recover a lot of stuff." Thi s excavation led the way in shipwreck archaeology. One often neglected offshoot of excavation archaeology is experimental archaeology, in which scientists try to interpret the activities of an earlier time by duplicating them. This area of study has grown up side by side with underwater archaeology . The most comprehensive such effort to date is the Kyrenia ship, a merchantman of the eastern Mediterranean dated to about 388sCE. Turkish and American divers and archaeologists working under the direction of the Institute for Nautical Archaeology's Michael Katzev recovered and recorded approximately 75 percent of the original vessel. ResearchSEA HISTORY, AUTUMN 1988

ers made exact scale models of every plank and structural member found . This allowed a full-scale, twelve-inches-tothe-foot replica to be built. Such a meticulous recreation of a vanished ship type opens a huge window on our seafaring past. We learn a great deal about the arts of the shipwright, the vessel' s capacity and the method of stowage-just as we learn the nature and origin of cargos from their remains. In sai ling the replica, we learn how close to the wind these vessels could sail, what their seakeeping qualities were, and what routes were available to ancient traders. The replica also affords us a fresh interpretation of texts, pictures and statues which we have been unable to interpret precisely before. The second section offers a conci se overview of Mediterranean trade during the Roman and Byzantine Empires, creating a composite picture of the development of trade and navigation from a few select sites. There are two particularly eloquent pieces of interpretation based on biblical narrative and specific ship finds . The first is Throckmorton 's use of information gleaned from a shipwreck site in Southern Italy to interpret St. Paul's shipwreck on Malta described in Acts . The other concerns the Kinneret boat, discovered on the Sea of Galilee in 1986. The excavation was overseen by Shelley Wachsmann of the Israel Department of Antiquities. Only 27ft long , this simple fishing/transport vessel dates to the first century and is the on ly vessel known to have survived from the time and land of Christ. If there is a weak link in The Sea Remembers, it is the section on conservation. This is a crucial element in all archaeology , but in underwater archaeology it takes on whole new dimensions. It is estimated that the ratio of the cost of shipwreck excavation to that of conservation and curation is 1: 12. Only four pages are given over to this subject; but the author, Victoria Jenssen of Parks Canada, gives some idea of the problems the marine conservator faces in preserving highly complex materials ranging from wood and other organic materials to ferrous and non-ferrous metals, glass and clay, which may have been preserved for millennia in environments ranging from a bog to salt water. Dr. Colin Martin, well known for his work on shipwrecks of the Spanish Armada, and Angela Evans of the British Museum, offer a succinct appreciation of how archaeology on land sites (such as the burial ships at Gokstad and Oseberg in Norway) , underwater sites

Back in print after 30 years in a new color edition

by the author An enduring tale of two years aboard a British limejuicer with 19 color illustrations by the noted marine artist and author.

WHALING LOGBOOKS "In the Wake of Whales"

The Whaling Journals of Capt. Edwin Brown 1841-1847 First Edition of original logbooks of hazardous global whaling voyages of one of the most successful American whalers Edition Limited, 250 numbered books Deluxe custom binding and covers Over 275 large 8 112" x 11 â&#x20AC;˘ pages Fold--0ut charts of all three voyages Many early photos and illustrations Over 300 drawings by Capt. Brown in logs His biography and whale fishery history Shipment of book in 1988 ;

Limited Pre-Publication Price Due to orders on hand offer is limited to copies available at time of receipt of check to Old Orient Press for $100. Shipping and tax (if required) bi/led separately. We are a Registered Non-Profit Organization.