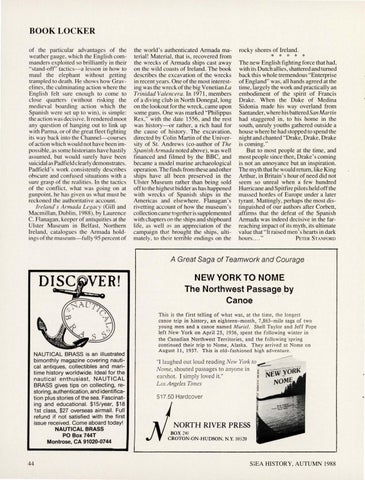 BOOK LOCKER of the particular advantages of the weather gauge, which the Engl ish commanders exp lo ited so brilli antl y in the ir "stand-off' tactics- a lesson in how to maul the e lephant witho ut getting trampled to death. He shows how Gravel ines, the culm inati ng action where the Eng li sh fe lt sure enough to come to close quarters (w ithout ri sking the medieval board ing acti on which the Spani sh were set up to win), is simple: the action was decisive. It rendered moot any question of hang ing out to link up with Parma, or of the great fleet fi ghting its way back into the Channel--courses of acti on which would not have been imposs ible, as some hi stori ans have has til y ass umed, but wo uld surely have been suicidal as Padfield clearly demonstrates. Padfie ld 's work consistentl y describes obscure and confused situations with a sure grasp of the rea liti es. In the tactics of the conflict, what was go ing on at gun point, he has given us what must be reckoned the authori tati ve account. Ireland's Armada Legacy (Gill and Macmill an, Dublin , 1988), by Laurence C. Flanaga n, keeper of antiquities at the Ulster Museum in Be lfas t, Northern Ire land, cata logues the Armada ho ldings of the museum-fu ll y 95 percent of

the world 's authenticated Armada material! Material, that is, recovered from the wrecks of Armada ships cast away on the wild coasts of Ireland. The book describes the excavati on of the wrecks in recent years. One of the most interesting was the wreck of the big Veneti an La Trinidad Valencera. In 1971 , members of a di ving cl ub in North Donegal, long on the lookout fo r the wreck, came upon some guns. One was marked "Philippus Rex ," with the date 1556, and the rest was history--0r rather, a rich haul for the cause of history. The excavation, directed by Co lin Martin of the Uni versity of St. Andrews (co-author of The Spanish Armada noted above), was well fi nanced and fi lmed by the BBC, and became a model marine archaeol ogical operation. The fi nds from these and other ships have all been preserved in the Ul ster Museum rather than being sold off to the highest bidder as has happened with wrecks of Spani sh ships in the Americas and e lsewhere. Fl anaga n's ri vetting account of how the museum 's collection came together is supplemented with chapters on the ships and shipboard life, as well as an apprec iation of the campaign that brought the ships, ultimately, to their terribl e endings on the

The new Engli sh fi ghting force that had, with its Dutch allies, shattered and turned back this whole tremendous "Enterpri se of England " was, all hands agreed at the time, largely the work and practi cally an embodime nt of the spirit of Franci s Drake. When the Duke of Medina Sidonia made hi s way overland from Santander, where hi s battered SanMartfn had staggered in , to his home in the south , unrul y youths gathered outside a house where he had stopped to spend the night and chanted "Drake, Drake, Drake is coming." But to most people at the time, and most people since then, Drake's coming is not a n annoyance but an inspiration. The myth that he would return , like King Arthur, in Britain 's hour of need did not seem so unreal when a few hundred Hurrica ne and Spitfire pilots held off the massed hordes of Europe under a later tyrant. Mattingly, perhaps the most distinguished of our authors after Corbett, affirm s that the defeat of the Spanish Armada was indeed decisive in the farreaching impact of its myth , its ultimate value that "It rai sed men's hearts in dark PETER STANFORD hours .. .. "

A Great Saga of Teamwork and Courage

NEW YORK TO NOME The Northwest Passage ,by Canoe Âˇ

"I laughed out loud ;eading New York Nome, shouted passages to anyone in earshot. I simply loved it." Los Angeles Times