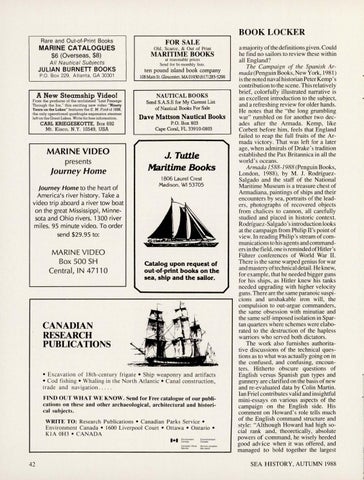 A New Steamship Video! From the producer of the a cclaimed "Last Passage Through the Ice ." this e xciting new video "Ninety Years on the Lakes" features the E. M. Ford of 1898, the only opera tiona l quadruple expansion s teame r le ft on the Grea t Lakes. Write fo r free in fo rmation.

NAUTICAL BOOKS Send S.A.S.E for My Current List of Nautical Books For Sale

journey Home to the heart of America's river history. Take a video trip aboard a river tow boat on the great Mississippi, Minnesota and Ohio rivers. 1300 river miles. 95 minute video. To order send $29.95 to: -

a majority of the definitions given. Could he find no sailors to review these within all England? The Campaign of the Spanish Armada (Penguin Books, New York, 1981) is the noted naval historian Peter Kemp 's contribution to the scene. This relatively brief, colorfully illustrated narrative is an excellent introduction to the subject, and a refreshing review for older hands . He notes that the "the long grumbling war" rumbled on for another two decades after the Annada. Kemp, like Corbett before him, feels that England failed to reap the full fruits of the Armada victory. That was left for a later age, when admirals of Drake's tradition established the Pax Britannica in all the world 's oceans. Armada 1588-1988 (Penguin Books, London , 1988), by M. J. RodrfguezSalgado and the staff of the National Maritime Museum is a treasure chest of Annadiana, paintings of ships and their encounters by sea, portraits of the leaders, photographs of recovered objects from chalices to cannon, all carefully studied and placed in historic context. Rodriguez-Salgado 's introduction looks at the campaign from Philip II 's point of view. In reading Philip 's stream of communications to his agents and commanders in the field, one is reminded of Hitler's Fuhrer conferences of World War II. There is the same warped genius for war and mastery of technical detail. He knew, for example, that he needed bigger guns for his ships, as Hitler knew his tanks needed upgrading with higher velocity guns. There are the same paranoic suspicions and unshakable iron will , the compulsion to out-argue commanders, the same obsession with minutiae and the same self-imposed isolation in Spartan quarters where schemes were elaborated to the destruction of the hapless .warriors who served both dictators. The work also furnishes authoritative discussions of the technical questions as to what was actually going on in the confused, and confusing, encounters . Hitherto obscure questions of English versus Spanish gun types and gunnery are clarified on the basis of new and re-evaluated data by Colin Martin. Ian Friel contributes valid and insightful mini-essays on various aspects of the campaign on the English side. His comment on Howard's role tells much of the English command structure and style: "Although Howard had high social rank and, theoretically, absolute powers of command, he wisely heeded good adv i ce when it was offered, and managed to hold together the largest SEA HISTORY, AUTUMN 1988