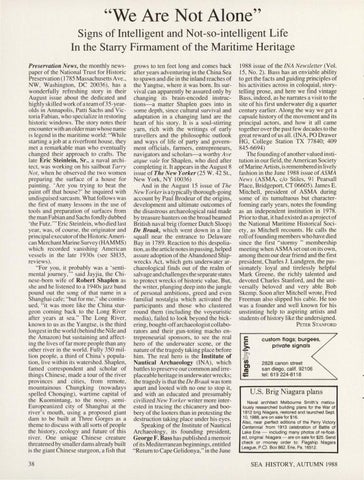 &quot;We Are Not Alone&#39;&#39; Signs of Intelligent and Not-so-intelligent Life In the Starry Firmament of the Maritime Heritage Preservation News, the monthly newspaper of the National Trust for Historic Preservation ( 1785 Massachusetts Ave. , NW, Washington, DC 20036), has a wonderfully refreshing story in their August issue about the dedicated and highly skilled work of a team of35-yearolds in Annapolis, Patti Sachs and Victoria Fabian, who specialize in restoring hi storic windows. The story notes their encounter with an older man whose name is legend in the maritime world: &quot;While starting a job at a riverfront house, they met a remarkable man who eventually changed their approach to crafts. The late Eric Steinlein, Sr., a naval architect, was working on his sailboat Tarry Not, when he observed the two women preparing the surface of a house for painting. &#39; Are you trying to beat the paint off that house? &#39; he inquired with undisgui sed sarcasm. What follows was the first of many lessons in the use of tools and preparation of surfaces from the man Fabian and Sachs fondly dubbed &#39; the Futz. &#39;&quot; Eric Steinlein, who died last year, was, of course, the originator and principal executorofthe Historic American Merchant Marine Survey (HAMMS) which recorded vanishing American vessels in the late 1930s (see SH35 , reviews). &quot;For you, it probably was a &#39;sentimental journey,&quot;&#39; said Jayjia, the Chinese-born wife of Robert Shaplen as she and he li stened to a 1940s jazz band pound out the song of that name in a Shanghai cafe; &quot;but for me,&quot; she continued, &quot;it was more like the China sturgeon coming back to the Long River after years at sea.&quot; The Long River, known to us as the Yangtse, is the third longest in the world (behind the Nile and the Amazon) but sustaining and affecting the lives of far more people than any other river in the world. Fully 350 million people, a third of China &#39;s population, live within its watershed. Shaplen, famed correspondent and scholar of things Chinese, made a tour of the river provinces and cities, from remote, mountainous Chungking (nowadays spelled Chonqing), wartime capital of the Kuomintang, to the noisy , semiEuropeanized city of Shanghai at the river&#39; s mouth, using a proposed giant dam to be built at Three Gorges as a theme to discuss with all sorts of people the history, ecology and future of this river. One unique Chinese creature threatened by smaller dams already built is the giant Chinese sturgeon, a fish that

grows to ten feet long and comes back after years adventuring in the China Sea to spawn and die in the inland reaches of the Yangtse, where it was born. Its survival can apparently be assured only by changing its brain-encoded instructions-a matter Shaplen goes into in some depth , since cultural survival and adaptation in a changing land are the heart of his story. It is a soul-stirring yam, rich with the writings of early travellers and the philosophic outlook and ways of life of party and government officials, farmers, entrepreneurs, navigators and scholars-a worthy Ave atque vale for Shaplen, who died after completing it. It appears in the August 8 issue of The New Yorker(25 W. 42 St. , New York, NY 10036) And in the August 15 issue of The New Yorker is a typically thorough-going account by Paul Brodeur of the origins, development and ultimate outcomes of the disastrous archaeological raid made by treasure hunters on the broad beamed British naval brig (former Dutch Sloop) De Braak, which went down in a line squall near the entrance to Delaware Bay in 1789. Reaction to this despoliation, as thearticle notes in passing, helped assure adoption of the Abandoned Shipwrecks Act, which gets underwater archaeological finds out of the realm of salvage and challenges the separate states to protect wrecks of historic value. But, the writer, plunging deep into the jungle of personal ambitions, greed and even familial nostalgia which activated the participants and those who clustered round them (including the voyeuristic media) , failed to look beyond the bickering, bought-off archaeologist collaborators and their gun-toting macho entrepreneurial sponsors, to see the real hero of the underwater scene, or the nature of the tragedy taking place before him. The real hero is the Institute of Nautical Archaeology (INA), which battles to preserve our common and irreplaceable heritage in underwater wrecks; the tragedy is that theDe Braak was tom apart and looted with no one to stop it, and with an educated and presumably civilized New Yorker writer more interested in tracing the chicanery and boobery of the looters than in protesting the destruction taking place under his eyes. Speaking of the Institute of Nautical Archaeology, its founding president, George F. Bass has published a memoir ofits Mediterranean beginnings, entitled &quot;Return toCapeGelidonya,&quot; in the June

1988 issue of the INA Newsletter (Vol. 15, No. 2). Bass has an enviable ability to get the facts and guiding principles of his activities across in coloquial, storytelling prose, and here we find vintage Bass, indeed , as he narrates a visit to the site of his first underwater dig a quarter century earlier. Along the way we get a capsule history of the movement and its principal actors, and how it all came together over the past few decades to the great reward ofus all. (INA, PO Drawer HG, College Station TX 77840; 409 845-6694) The founding of another valued institution in our field, the American Society of Marine Artists, is remembered in lively fashion in the June 1988 issue of ASMA News (ASMA, c/o Stiles, 91 Pearsall Place, Bridgeport, CT 06605). James E. Mitchell , president of ASMA during some of its tumultuous but characterforming early years, notes the founding as an independent institution in 1978. Prior to that, it had existed as a project of the National Maritime Historical Society, as Mitchell recounts. He calls the roll of founding members who have died since the first &quot;stormy &quot; membership meeting when ASMA set out on its own, among them our dear friend and the first president, Charles J. Lundgren, the passionately loyal and tirelessly helpful Mark Greene, the richly talented and devoted Charles Stanford, and the universally beloved and very able Bob Skemp. Soon after Mitchell wrote, Fred Freeman also slipped his cable. He too was a founder and well known for his unstinting help to aspiring artists and students of history like the undersigned. PETER STANFORD

U.S. Brig Niagara plans Naval architect Melbourne Smith&#39;s meticulously researched building plans for the War of 1812 brig Niagara, restored and launched Sept. 10, 1988, are on sale for $16. Also, near perfect editions of the Perry Victory Centennial from 1913 celebration of Battle of Lake Erie - including many photos of re-floated, original Niagara - are on sale for $25. Send check or rmoney order to: Flagship Niagara League, P.c:&gt;. Box 862, Erie, Pa. 16512.