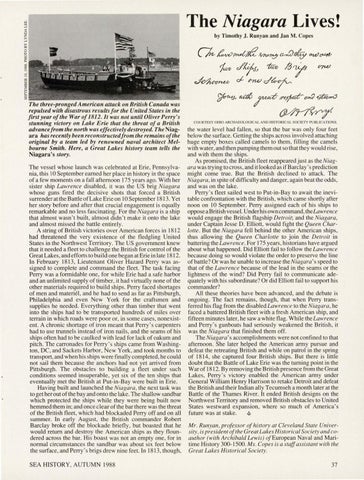 J~HL-(/ cJ. ~ d~. The three-pronged American attack on British Canada was repulsed with disastrous results for the United States in the first year of the War of 1812. It was not until Oliver Perry's stunning victory on Lake Erie that the threat of a British advance from the north was effectively destroyed. The Niagara has recently been reconstructedfrom the remains ofthe original by a team led by renowned naval architect Melbourne Smith. Here, a Great Lakes history team tells the Niagara's story. The vessel whose launch was celebrated at Erie, Pennsylvania, this 10 September earned her place in history in the space of a few moments on a fall afternoon 175 years ago. With her sister ship Lawrence disabled, it was the US brig Niagara whose guns fired the decisive shots that forced a British surrender at the Battle of Lake Erie on 10September1813. Yet her story before and after that crucial engagement is equally remarkable and no less fascinating. For the Niagara is a ship that almost wasn't built, almost didn ' t make it onto the lake and almost missed the battle entirely. A string of British victories over American forces in 18 12 had threatened the very existence of the fledgling United States in the Northwest Territory. The US government knew that it needed a fleet to challenge the British for control of the Great Lakes, and efforts to build one began at Erie in late 1812. In February 1813 , Lieutenant Oliver Hazard Perry was assigned to complete and command the fleet. The task facing Perry was a formidable one, for while Erie had a safe harbor and an unlimited suppl y of timber, it had virtually none of the other material s required to build ships. Perry faced shortages of men and materiel, and he had to send as far as Pittsburgh, Philadelphia and even New York for the craftsmen and supplies he needed. Everything other than timber that went into the ships had to be transported hundreds of miles over terrain in which roads were poor or, in some cases, nonexi stent. A chronic shortage of iron meant that Perry's carpenters had to use trunnels instead of iron nails, and the seams of his ships often had to be caulked with lead for lack of oakum and pitch. The carronades for Perry's ships came from Washington, DC, and Sackets Harbor, New York, and took months to transport, and when hi s ships were finally completed, he could not sail them because the anchors had not yet arrived from Pittsburgh. The obstacles to building a fleet under such conditions seemed insuperable, yet six of the ten ships that eventually met the British at Put-in-Bay were built in Erie. Having built and launched the Niagara , the next task was to get herout of the bay and onto the lake. The shallow sandbar which protected the ships while they were being built now hemmed them in; and once clear of the bar there was the threat of the British fleet, which had blockaded Perry off and on all summer. In early August, the British commander Robert Barclay broke off the blockade briefly, but boasted that he would return and destroy the American ships as they floundered across the bar. His boast was not an empty one, for in normal circumstances the sandbar was about six feet below the surface, and Perry's brigs drew nine feet. In 1813 , though, SEA HISTORY, AUTUMN 1988

the water level had fallen , so that the bar was only four feet below the surface. Getting the ships across involved attaching huge empty boxes called camels to them, filling the camels with water, and then pumping them out so that they would rise, and with them the ships. As promised, the British fleet reappeared just as the Niagara was trying to cross, and it looked as if Barclay's prediction might come true. But the British declined to attack. The Niagara , in spite of difficulty and danger, again beat the odds, and was on the lake. Perry 's fleet sailed west to Put-in-Bay to await the inevitable confrontation with the British, which came shortly after noon on 10 September. Perry assigned each of his ships to oppose aBritish vessel. Under his own command, the Lawrence would engage the British flagship Detroit; and the Niagara, under Captain Jesse D. Elliott, would fight the Queen Charlotte. But the Niagara fell behind the other American ships, thus allowing the Queen Charlotte to join the Detroit in battering the Lawrence. For 175 years, historians have arg ued about what happened . Did Elliott fail to follow the Lawrence because doing so would violate the order to preserve the line of battle? Or was he unable to increase the Niagara's speed to that of the Lawrence because of the lead in the seams or the lightness of the wind? Did Perry fail to communicate adequately with hi s subordinate? Or did Elliott fail to support his commander? All these theories have been advanced, and the debate is ongoing. The fact remains, though, that when Perry transferred his flag from the disabled Lawrence to the Niagara, he faced a battered British fleet with a fresh American ship, and fifteen minutes later, he saw a white flag. While the Lawrence and Perry's gunboats had seriously weakened the British, it was the Niagara that finished them off. The Niagara's accomplishments were not confined to that afternoon. She later helped the American army pursue and defeat the retreating British and while on patrol in the spring of 1814, she captured four British ships. But there is little doubt that the Battle of Lake Erie was the turning point in the War of 1812. By removing the British presence from theGreat Lakes, Perry 's victory enabled the American army under General William Henry Harrison to retake Detroit and defeat the British and their Indian ally Tecumseh a month later at the Battle of the Thames River. It ended British designs on the Northwest Territory and removed British obstacles to United States westward expansion, where so much of America's .t. future was at stake.