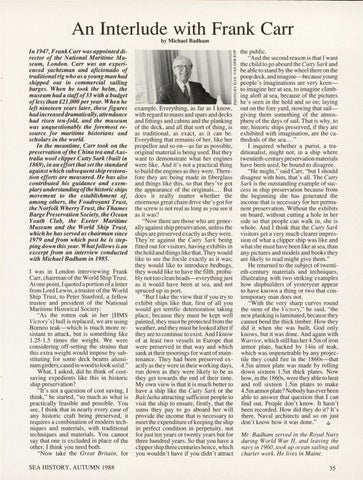 An Interlude with Frank Carr by Michael Badham

In I947, Frank Carr was appointed director of the National Maritime Museum, London. Carr was an experienced yachtsman and aficionado of traditional rig who as a young man had shipped out in commercial sailing barges. When he took the helm, the museum had a staff of33 with a budget of less than ÂŁ2I ,000 per year. When he left nineteen years later, these figures had increased dramatically, attendance had risen ten-fold, and the museum was unquestionably the foremost resource for maritime historians and scholars in the world. In the meantime, Carr took on the preservation of the China tea and Australia wool clipper Cutty Sark (built in I869), in an effort that set the standard against which subsequent ship restoration efforts are measured. He has also contributed his guidance and exemplary understanding ofthe historic ships movement to the establishment of, among others, the Foudroyant Trust, the Norfolk Wherry Trust, the Thames Barge Preservation Society, the Ocean Youth Club, the Exeter Maritime Museum and the World Ship Trust, which he has served as chairman since I979 and from which post he is stepping down this year. Whatfollows is an excerpt from an interview conducted with Michael Badham in I985. I was in London interviewing Frank Carr, chairman of the World Ship Trust. At one point, I quoted a portion of a letter from Lord Lewin, a trustee of the World Ship Trust, to Peter Stanford, a fellow trustee and president of the National Maritime Historical Society: "As the rotten oak in her [HMS Victory's] hull is replaced, we are using Borneo teak-which is much more resistant to attack, but is something like 1.25-1.5 times the weight. We were considering off-setting the strains that this extra weight would impose by substituting for some deck beams aluminum girders, cased in wood to look solid." What, I asked, did he think of costsaving expedients like this in hi storic ship preservation? "It's not a question of cost saving, I think ," he started, "so much as what is practically feasible and possible. You see, I think that in nearly every case of any historic craft being preserved, it requires a combination of modem techniques and materials, with traditional techniques and materials. You cannot say that one is excluded in place of the other, I think you need both. "Now take the Great Britain, for SEA HISTORY, AUTUMN 1988

~ be able to stand by the wheel there on the

poop deck, and imagine-because young ~ people 's imaginations are very keen;;; to imagine her at sea, to imagine climb13 ing aloft at sea, because of the pictures s: he 's seen in the hold and so on; laying example. Everything, as far as I know, out on the fore yard, stowing that sailwith regard to masts and spars and decks giving them something of the atmosand fittings and cabins and the planking phere of the days of sail. That is why, to of the deck, and all that sort of thing, is me, historic ships preserved, if they are as traditional , as exact, as it can be. exhibited with imagination, are the caEverything that remains of her, like her thedrals of the sea .. .. " propellor and so on-as far as possible, I inquired whether a purist, a traoriginal material is being used. But they ditionalist, might not, in a ship where want to demonstrate what her engines twentieth-century preservation materials were like. And it' s not a practical thing have been used, be bound to disagree. "He might," said Carr, "but I should to build the engines as they were. Therefore they are being made in fiberglass disagree with him, that's all. The Cutty and things like this, so that they' ve got Sark is the outstanding example of sucthe appearance of the originals .... But cess in ship preservation because from does it really matter whether the the beginning she has generated the enormous great chain drive she 's got for income that is necessary for her permathe screw is not real as long as you see it nent preservation. Without the exhibits as it was? on board, without cutting a hole in her "Now there are those who are gener- side so that people can walk in , she is ally against ship preservation, unless the whole. And I think that the Cutty Sark ships are preserved exactly as they were. visitors get a very much clearer impresThey're against the Cutty Sark being sion of what a clipper ship was like and fitted out for visitors, having exhibits in what she must have been like at sea, than the hold and things like that. They would any pictures and models and books they like to see the focsle exactly as it was; are likely to read might give them ." they would like to introduce bedbugs, He returned to the subject of twentithey would like to have the filth , proba- eth-century materials and techniques, bly not too clean heads-everything just illustrating with two striking examples as it would have been at sea, and not how shipbuilders of yesteryear appear spruced up in port. to have known a thing or two that con"But I take the view that if you try to temporary man does not. "With the very sharp curves round exhibit ships like that, first of all you would get terrific deterioration taking the stem of the Victory ," he said, "the place, because they must be kept well new planking is laminated, because they painted, they must be protected from the cannot bend the thick timber. How they weather, and they must be looked after if did it when she was built, God only they are to continue to exist. And I know knows, but it was done. And again with of at least two vessels in Europe that Warrior, which stillhasher4.5inofiron were preserved in that way and which armor plate, backed by 14in of teak, sank at their moorings for want of main- which was impenetrable by any projectenance. They had been preserved ex- tile they could fire in the l 860s-that actly as they were in their working days, 4.5in armor plate was made by rolling run down as they were likely to be as down sixteen I.Sin thick plates. Now they get towards the end of their time. how, in the 1860s, were they able to heat My own view is that it is much better to and roll sixteen l .5in plates to make have a ship like the Cutty Sark or the 4.5in armor plate? Nobody has ever been Balclutha attracting sufficient people to able to answer that question that I can visit the ship to ensure, firstly , that the find out. People don ' t know. It hasn' t sums they pay to go aboard her will been recorded. How did they do it? It 's provide the income that is necessary to there. Naval architects and so on just meettheexpenditureofkeepingthe ship don ' t know how it was done." .i, in perfect condition in perpetuity, not for just ten years or twenty years but for Mr . Badham served in the Royal Navy three hundred years. So that you have a during World War II , and leaving the clipper ship three centuries hence, which navy in 1960 , took up ocean sailing and you wouldn ' t have if you didn ' t attract charter work. He lives in Maine. ui