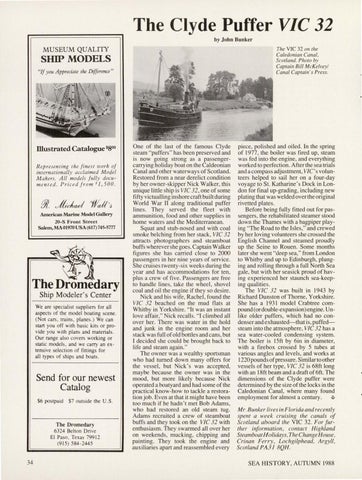 We are specialist suppliers for all aspects of the model boating scene . (Not cars , trains, planes.) We can start you off with basic kits or provide you with plans and materials . Our range also covers working or static models, and we carry an extensive selection of fittings for all types of ships and boats.

One of the last of the famous Clyde steam &quot;puffers&quot; has been preserved and is now going strong as a passengercarrying holiday boat on the Caldeonian Canal and other waterways of Scotland. Restored from a near derelict condition by her owner-skipper Nick Walker, this unique little ship is VIC 32, one of some fifty victualling inshore craft built during World War II along traditional puffer lines. They served the fleet with ammunition , food and other supplies in home waters and the Mediterranean. Squat and stub-nosed and with coal smoke belching from her stack, VIC 32 attracts photographers and steamboat buffs wherever she goes. Captain Walker fi gures she has carried close to 2000 passengers in her nine years of service. She cruises twenty-six weeks during the year and has accommodations for ten , plus a crew of five. Passengers are free to handle lines, take the wheel, shovel coal and oil the engine if they so desi re. Nick and hi s wife, Rachel, found the VIC 32 beached on the mud flats at Whitby in Yorkshire. &quot;It was an instant love affair,&quot; Nick recall s. &quot;I climbed all over her. There was water in the hold and junk in the engine room and her stack was full of old bottles and cans, but I decided she could be brought back to life and steam again.&quot; The owner was a wealthy sportsman who had turned down many offers for the vessel , but Nick&#39;s was accepted, maybe because the owner was in the mood, but more likely because Nick operated a boatyard and had some of the practical know-how to tackle a restoration job. Even at that it might have been too much if he hadn &#39; t met Bob Adams, who had restored an old steam tug. Adams recruited a crew of steamboat buffs and they took on the VIC 32 with enthusiasm. They swarmed all over her on weekends, mucking, chipping and painting. They took the engine and auxi liaries apart and reassembled every

piece, polished and oiled. In the spring of 1977, the boiler was fired up, steam was fed into the engine, and everything worked to perfection. After the sea trials and a compass adjustment, VI C&#39;s volunteers helped to sail her on a four-day voyage to St. Katharine &#39;s Dock in London for final up-grading, including new plating that was welded over the original rivetted plates. Before being fully fitted out for passengers, the rehabilitated steamer stood down the Thames with a bagpiper playing &quot;The Road to the Isles,&quot; and crewed by her loving volunteers she crossed the English Channel and steamed proudly up the Seine to Rouen. Some months later she went &quot;deep sea,&quot; from London to Whitby and up to Edinburgh, plunging and rolling through a full North Sea gale, but with her seasick proud of having experienced her staunch sea-keeping qualities. The VIC 32 was built in 1943 by Richard Dunston of Thorne, Yorkshire. She has a 1931 model Crabtree compound (or double-expansion) engine. Unlike older puffers, which had no condenser and exhausted-that is , puffedsteam into the atmosphere, VIC 32 has a sea water-cooled condensing system. The boiler is 15ft by 6in in diameter, with a firebox crossed by 5 tubes at various angles and level s, and works at 1220 pounds of pressure. Similar to other vessels of her type, VIC 32 is 68ft long with an l 8ft beam and a draft of 6ft. The dimensions of the Clyde puffer were determined by the size of the locks in the Caledonian Canal, where many found .V employment for almost a century. Mr. Bunker lives in Florida and recently spent a week cruising the canals of Scotland aboard the VIC 32. For further information, contact Highland Steamboat Holidays , The Change House, Crinan Ferry, Lochgilphead, Argyll, Scotland PA3 1 BQH. SEA HISTORY, AUTUMN 1988