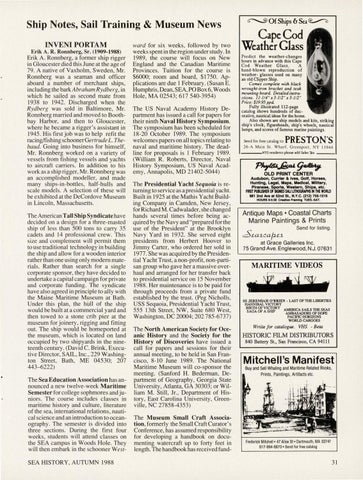 Ship Notes, Sail Training &amp; Museum News INVENI PORTAM Erik A. R. Ronnberg, Sr. (1909-1988) Erik A. Ronnberg, a former ship rigger in Gloucester died this June at the age of 79. A native of Vaxholm, Sweden, Mr. Ronnberg was a seaman and officer aboard a number of merchant ships, including the bark Abraham Rydberg, in which he sailed as second mate from 1938 to 1942. Discharged when the Rydberg was sold in Baltimore, Mr. Ronnberg married and moved to Boothbay Harbor, and then to Gloucester, where he became a rigger&#39;s assistant in 1945. His first job was to help refit the racing/fishing schooner Gertrude L. Thebaud. Going into business for himself, Mr. Ronnberg worked on a variety of vessels from fishing vessels and yachts to aircraft carriers. In addition to his work as a ship rigger, Mr. Ronn berg was an accomplished modeller, and made many ships-in-bottles, half-hulls and scale model s. A selection of these will be exhibited at the DeCordove Museum in Lincoln, Massachusetts.

The American Tall Ship Syndicate have decided on a design for a three-masted ship of less than 500 tons to carry 35 cadets and 14 professional crew. This size and complemenl will permit them to use traditional technology in building the ship and allow for a wooden interior rather than one using only modem materials. Rather than search for a single corporate sponsor, they have decided to undertake a capital campaign for private and corporate funding. The syndicate have also agreed in principle to ally with the Maine Maritime Museum at Bath. Under this plan, the hull of the ship would be built at a commercial yard and then towed to a stone crib pier at the museum for joinery, rigging and fitting out. The ship would be homeported at the museum , which is located on land occupied by two shipyards in the nineteenth century. (David C. Brink, Executive Director, SAIL, Inc. , 229 Washington Street, Bath, ME 04530; 207 443-6222) The Sea Education Association has announced a new twelve-week Maritime Semester for college sophmores and juniors. The course includes classes in maritime history and culture, literature of the sea, international relations, nautical science and an introduction to oceanography. The semester is divided into three sections. During the first four weeks, students will attend classes on the SEA campus in Woods Hole. They will then embark in the schooner WestSEA HISTORY, AUTUMN 1988

ward for six weeks, followed by two weeks spent in the region under study. In 1989, the course will focus on New England and the Canadian Maritime Provinces. Tuition for the course is $6000; room and board, $1750. Applications are due 1 February. (Susan E. Humphris , Dean, SEA, PO Box 6, Woods Hole, MA 02543; 617 540-3954) The US Naval Academy History Department has issued a call for papers for their ninth Naval History Symposium. The symposium has been scheduled for 18-20 October i989. The symposium welcomes papers on all topics relating to naval and maritime history. The deadline for proposals is 1 February 1989. (Wi lliam R. Roberts , Director, Naval History Symposium, US Naval Academy, Annapolis, MD 21402-5044) The Presidential Yacht Sequoia is returning to service as a presidential yacht. Built in 1925 at the Mathis Yacht Building Company in Camden, New Jersey, for Richard M. Cadwalader, she changed hands several times before being acquired by the Navy and &quot;prepared forthe use of the President&quot; at the Brooklyn Navy Yard in 1932. She served eight presidents from Herbert Hoover to Jimmy Carter, who ordered her sold in 1977. She was acquired by the Presidential Yacht Trust, a non-profit, non-partisan group who gave her a massive overhaul and arranged for her transfer back to presidential service on 15 November 1988. Her maintenance is to be paid for through proceeds from a private fund established by the trust. (Peg Nicholls, USS Sequoia, Presidential Yacht Trust, 555 13th Street, NW, Suite 680 West, Washington , DC 20004; 202 785-6737) The North American Society for Oceanic History and the Society for the History of Discoveries have issued a call for papers and sessions for their annual meeting, to be held in San Francisco, 8-10 June 1989. The National Maritime Museum will co-sponsor the meeting. (Sanford H. Bederman, Department of Geography, Georgia State University, Atlanta, GA 30303 ; or William M. Still , Jr. , Department of History, East Carolina University , Greenville, NC 27858-4353) The Museum Small Craft Association, formerly the Small Craft Curator&#39;s Conference, has assumed responsibility for developing a handbook on documenting watercraft up to forty feet in length. The handbook has received fund-