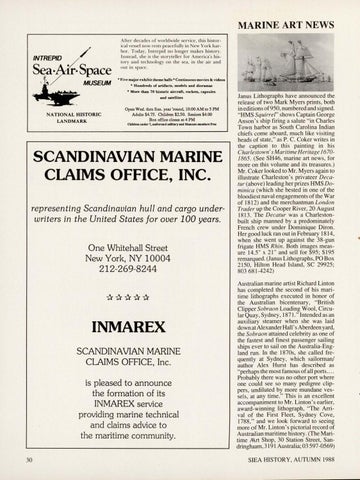 INMAREX SCANDINAVIAN MARINE CLAIMS OFFICE, Inc. is pleased to announce the formation of its INMAREX service providing marine technical and claims advice to the maritime community. 30

Janus Lithographs have announced the release of two Mark Myers prints, both in editions of950, numbered and signed. "HMS Squirrel" shows Captain George Anson's ship firing a salute "in Charles Town harbor as South Carolina Indian chiefs come aboard, much like visiting heads of state," as P. C. Coker writes in the caption to this painting in his Charlestown' s Maritime Heritage 16701865. (See SH46, marine art news, for more on this volume and its treasures.) Mr. Coker looked to Mr. Myers again to illustrate Charleston' s privateer Decatur (above) leading her prizes HMS Dominica (which she bested in one of the bloodiest naval engagements of the War of 1812) and the merchantman London Trader up the Cooper River, 20 August 1813. The Decatur was a Charlestonbuilt ship manned by a predominately French crew under Dominique Diron. Her good luck ran out in February 1814, when she went up against the 38-gun frigate HMS Rhin. Both images measure 14.5" x 21 " and sell for $95 ; $195 remarqued. (Janus Lithographs, PO Box 2150, Hilton Head Island, SC 29925 ; 803 681-4242) Australian marine artist Richard Linton has completed the second of his maritime lithographs executed in honor of the Australian bicentenary, "British Clipper Sobraon Loading Wool, Circular Quay, Sydney, 1871." Intended as an auxiliary steamer when she was laid down at Alexander Hall 's Aberdeen yard, the Sobraon attained celebrity as one of the fastest and finest passenger sailing ships ever to sail on the Australia-England run. In the 1870s, she called frequently at Sydney, which sailorman/ author Alex Hurst has described as "perhaps the most famous of all ports ... . Probably there was no other port where one could see so many pedigree clippers, undiluted by more mundane vessels, at any time. " This is an excellent accompaniment to Mr. Linton's earlier, award-winning lithograph, "The Arrival of the First Fleet, Sydney Cove, 1788," and we look forward to seeing more (J)f Mr. Linton's pictorial record of Austrailian maritime history . (The Maritime A\.rt Shop, 30 Station Street, Sandringhaam, 3191Australia;03 597-0569) SIEA HISTORY, AUTUMN 1988